Organic chemistry is the study of carbon compounds, so the study of organic chemistry is important because all living things are based on carbon compounds. Carbon is unique in that it can form up to four bonds in a compound, so they can easily bond with other carbon atoms, forming long chains or rings. In addition, the type of bonding in organic compounds is almost always covalent. Organic compounds don't dissociate in solutions because there are no ionic bonds, and therefore organic compounds are poor conductors of electricity and do not behave as electrolytes in solution. Generally, the larger and more complicated the organic substance, the higher its boiling and melting points.

Why is silicon, another element in group 14 of the periodic table, unable to make the great variety of molecules that carbon atoms can?

Silicon can make large molecules called silicones; however, the silicon-silicon bond is much weaker than the carbon-carbon bond, especially with respect to the silicon-oxygen bond. □​

So carbon can have four bonds, but the number of bonds carbon makes per atom can also vary. Just to get the terminology out of the way, we'll be looking at what's known as hydrocarbons, which essentially covers molecules that have only carbon and hydrogen atoms. Even more particularly, we'll study aliphatic compounds, which means the compounds will be open-chained. The details of which will be explained later.

When it comes to Alkanes, Alkenes, and Alkynes, the acidity is in the order of Alkynes > Alkenes > Alkanes. The acidity is mainly due to the increase in the s-character which causes an increase in acidity.

A large and structurally simple class of hydrocarbons includes those substances in which all the carbon-carbon bonds are single bonds. These are called saturated hydrocarbons or alkanes. The simplest alkanes are methane (CHX4​), ethane (CX2​HX6​), and propane (CX3​HX8​). The alkanes are also called as paraffins. In an alkane, all 4 valencies of the carbon atom are satisfied with other hydrogen atoms.

This gives them a general formula : CXn​H2n+2​.

Methane gas is the first member of the homologous series of alkanes. The valency of a single carbon atom is satisfied by four hydrogen atoms which form single covalent bonds.

Alkenes are the unsaturated hydrocarbons in which there is a double bond between two carbon atoms. In these compounds, unsaturation is due to the presence of the double bond.

Alkenes have the general formula CXn​HX2n​, where n is the number of carbon atoms in the molecule. For example,

Note: There is no alkene with only one carbon atom.

Alkynes contain only one triple bond between two adjacent carbon atoms. But if the number of triple bonds is more than one in any compound, the standard IUPAC nomenclature is used. They are commonly called as acetylenes.

They have the general formula CXn​HX2n−2​​, where n is the number of carbon atoms in the molecule. 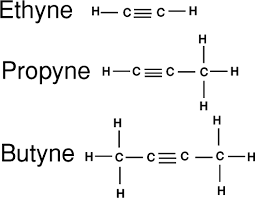