Kepler's laws describe the orbits of planets around the sun or stars around a galaxy in classical mechanics. They have been used to predict the orbits of many objects such as asteroids and comets , and were pivotal in the discovery of dark matter in the Milky Way. Violations of Kepler's laws have been used to explore more sophisticated models of gravity, such as general relativity. While Newton's laws generalize Kepler's laws, most problems related to the periods of orbits are still best solved using Kepler's laws, since they are simpler.

Recall the statements of Kepler's laws:

These laws can be applied to model natural objects like planets, stars, or comets, as well as man-made devices like rockets and satellites in orbit.

Although Kepler originally developed his laws in the context of planetary orbits, the results hold for any system with a radial force obeying the inverse square law. Coulomb's law holds that the electric force between two charged particles in an inverse square law like gravity (assuming that the particles have opposite charge). In spite of the fact that quantum mechanics is needed to fully model how electrons orbit nuclei, electrons with very high energy behave as though they had Keplerian orbits, and atoms containing such electrons are known as Rydberg atoms. 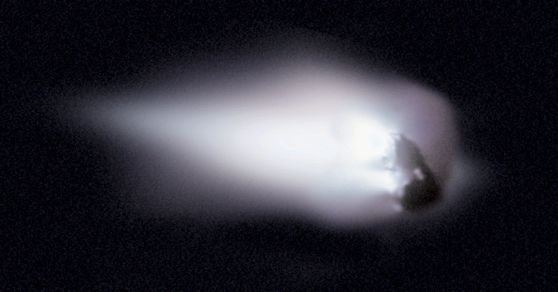 Halley's Comet is the first comet that astronomers realized had a periodic orbit. It passes within sight of Earth once every 75 years. Kepler's third law determines the length of the semimajor axis of this orbit:

The highly elliptical orbit of Halley's Comet, compared to the relatively circular orbits of Jupiter, Saturn, Uranus and Neptune

Above, the more precise form of Kepler's third law T2=GM4π2​a3 has been used, where the proportionality constant between T2 and a3 has been solved for. Obtaining this constant requires an extensive derivation.

At the point in its orbit where it is closest to the sun, Halley's comet is only 8.8×108 m from the sun, coming between the orbits of Mercury and Venus. It is furthest away from the sun at a distance of approximately 2a=5.4×1012 m, past the orbit of Neptune.

The most efficient route from Earth to Mars is called the Hohmann transfer orbit [2]. By Kepler's third law, it must be the ellipse that touches both orbits with the shortest possible semimajor axis. This is intuitive because without any acceleration, a rocket on Earth would stay in the orbit of Earth. The most efficient route is just the (elliptical) orbit which starts at the Earth's orbit and ends at the Mars' orbit.

The orbits of Earth and Mars are approximately circular, with radii rE​=1 AU and rM​=1.542 AU. An ellipse touching both of these circles will have semimajor axis

An astronaut stranded out in space wants to figure out how far she is from Earth. The only thing that she has with her is her handy dandy indestructible stopwatch that can survive the heat of re-entry and the shock of impact with Earth. She starts the stopwatch and lets it go with approximately zero velocity in the reference frame of Earth. After the watch crashes to Earth, mission control retrieves it and finds that the stopwatch was falling for 7 days. How far away from Earth is the astronaut?

This problem can be solved by integrating the Newtonian gravitational force over a straight line going towards Earth to find the position as a function of time and vice versa, but using the trick of applying Kepler's third law is easier. Suppose the astronaut's distance from Earth is some number R, and consider an ellipse with major axis of length slightly larger than R, with a minor axis b≪R. This is an ellipse with eccentricity very near one. Taking the limit of this ellipse as the eccentricity goes to one yields a straight line of length R. This suggests that the properties of ellipses may be used to derive quantities related to straight lines in general, since any straight line may be approximated well by an ellipse of eccentricity near one.

The time t it takes to fall down this line is half of the period T it would take to go around the corresponding near-unit-eccentricity ellipse. Since the semimajor axis of the ellipse is 2R​, by Kepler's third law

for this astronaut's distance from Earth. This derivation was much more straightforward than the burdensome calculus required to solve Newton's second law for the gravitational force.

Astronomers define a galaxy rotation curve to be the plot of the tangential velocity of stars as a function of their distance from the center of any given galaxy. Kepler's laws can be used to derive the shape of this curve assuming the stars have circular (or low eccentricity) orbits.

By Kepler's second law, the area swept out by the line from the galaxy center to a star in a given time must be constant. Since the radius r to such a star is constant in circular motion, the velocity v of these stars in orbit must also be constant. In that case, the period of rotation T is v2πr​. Plugging this into Kepler's third law gives

The mass M is also a function of the radius r, since even if the mass density in a galaxy is homogeneous this means that the mass contained in some radius scales as the radius cubed. That is, a cluster of stars with roughly homogeneous mass density will have mass that scales like M(r)=M0​r3. Plugging this into the above expression for v gives v(r)=rGM0​​.

A galaxy with a cluster of stars in the middle and sparsely spaced stars further out will therefore have a galaxy rotation curve that starts out linear and then falls off like r​1​, like curve A in the picture. 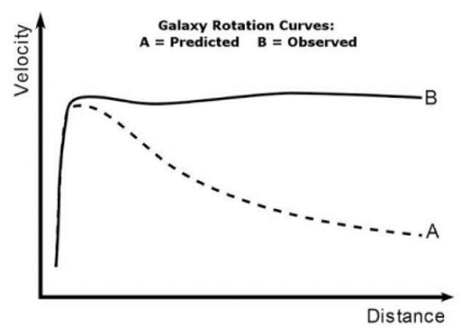 Astronomers have found that the galaxy rotation curve of the Milky Way does not follow this curve if we take into account all of the known mass in the Milky Way. It looks more like curve B, where the velocity stays approximately constant even far away from the center of the galaxy. This implies that either Kepler's laws are wrong or there is mass we haven't accounted for. While there are cases in which it is known that Kepler's laws are incomplete or not a good description of nature (see below), physicists are very confident that Kepler's laws should apply to these stars because their dynamics satisfy the relevant assumptions for Newtonian gravitation. The data predicts the existence of dark matter: matter that we can't see, but must be there due to its influence on gravitation. 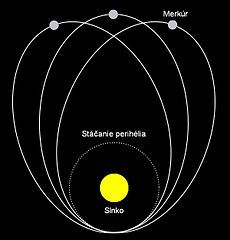 [3] Image retrieved from https://commons.wikimedia.org/wiki/File:Mercure_orbite_precession_sk.JPG on 26 Feb 2016.