Any single decimal numeral [0-9] can be represented by a four bit pattern. The procedure of encoding digits is called "Natural BCD" (NBCD), where each decimal digit is represented by its corresponding four-bit binary value. 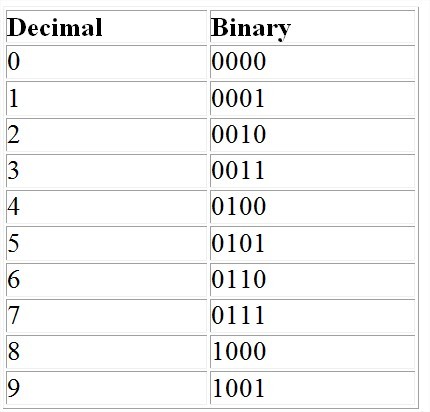 Generally there are 2 types of BCD: unpacked and packed.

Unpacked BCD: In the case of unpacked BCD numbers, each four-bit BCD group corresponding to a decimal digit is stored in a separate register inside the machine. In such a case, if the registers are eight bits or wider, the register space is wasted.

There is the another one which is not really considered as BCD:

In the case of 946, the binary representation of this number is 01110110010. Here we convert the total number into its binary form. But when we form the BCD code of the number 946, that'll be

The use of BCD can be summarized as follows:

How many bits would be required to encode decimal numbers 0 to 9999 in straight binary and BCD codes? What would be the BCD equivalent of decimal 27 in 16-bit representation?

Find a decimal number which can be represented with 1's only and no 0's in binary, and takes 4 bits in binary. In other words, if you convert that decimal number into binary, it cannot be like 10101 which does contain 0's. It should only contain a certain number of 1's.

Submit your answer as the sum of digits of the binary-coded decimal of that decimal number.