Torque is the rotational effect of force. For moving, a body from rest, a force is required similar to set up a body in rotation from rest a torque is required. The following section will deal with details about how large or small is torque? In which direction the torque acts.

Consider a screw shown in the diagram. If forces are applied at different locations then how the rotating effects are created. The axis of rotation passes through the center of the screw and perpendicular to the plane of the diagram.
First, consider only F1​ force, then will it create any rotational effect? The screw will not rotate, thus the force F1​ will not create any torque.
Now, if only force F2​ is applied, then again the screw will not rotate.
Forces F3​ and F4​ will rotate the screw, thus they will create some torque or turning effect. However, which one will easily rotate the screw? The force F3​ is far off the axis of rotation and easily rotate the screw as compared to F4​.

On accumulating all the above mentioned factors, it can be concluded that about any point
τ=r×F Here r is the position vector of the point of application of force with respect to the point about which torque is to be calculated,
F is the force applied,
τ is the torque.
Direction of torque can be calculated by the rules of cross product. 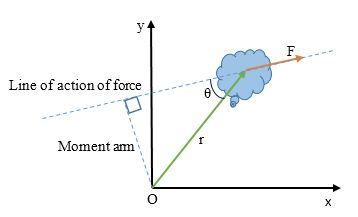 Consider the above diagram in which the angle between r and F is θ. In this case if the line of action of the force is extended and a perpendicular is dropped on it from the point of calculation of torque then this perpendicular is called as moment arm.
The moment arm equals rsinθ,
Magnitude of the torque about point 'O' equals rFsinθ,
Therefore, torque can also be written as the product of force and moment arm.

If torque is to be calculated about a point on the line of action of force, then the torque comes out to be zero. This is because in this case the angle between the position vector 'r' and force 'F' will be zero. 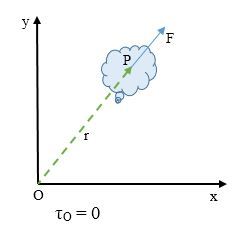 When a force of 6.0 N is exerted at 30∘ to a wrench at a distance of 8 cm from the nut, it is just able to loosen the nut. What force F would be sufficient to loosen it, if it acts perpendicularly to the wrench at 16 cm from the nut? 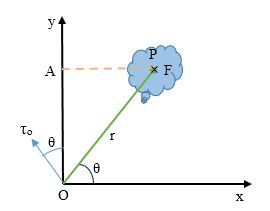 A force is applied perpendicular to the edge of a cube of side length 'a' as shown in the diagram. 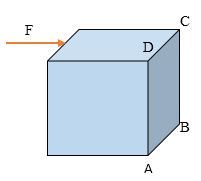 The torque about edge CD and AB respectively is