When you get shocked from touching a metal doorknob after walking across a rug, what you feel are electrons jumping from your hand to the door metal. The electrons jump because they're attracted to the door by their electric charge. Measures of charge are commonly symbolized as q, and charge is a characteristic property of all matter.

The standard unit of charge in the SI system is the Coulomb. Some types of matter, like neutrons, have no charge and are electrically neutral (hence their name). Other particles like protons and electrons, have positive or negative electric charge, respectively. Despite the unit of charge being the Coulomb, the "unit" particles of charge, the proton and the electron, each have a charge of ±1.6×10−19 C.

The SI unit of charge is the Coulomb, abbreviated as C:

Particle colliders have revealed particles called quarks, which come together in particular combinations to form other particles such as the neutron and proton, and they exhibit charges of {+32​qp​,+31​qp​,−31​qp​,−32​qp​}.

They are more fundamental than protons and neutrons, but because of their strong tendency to join up into more stable aggregate particles, they are rarely seen outside the special situation of the particle collider.

Charges wouldn't be all that interesting if they didn't enable some kind of motion. In fact, charged matter is seen to undergo peculiar phenomena that are not experienced by uncharged matter. Some examples of these are the well-known aurora borealis, electrons flowing en masse from cloud to cloud during storms (a.k.a. lightning), and when your hair stands on end after riding down a slide. 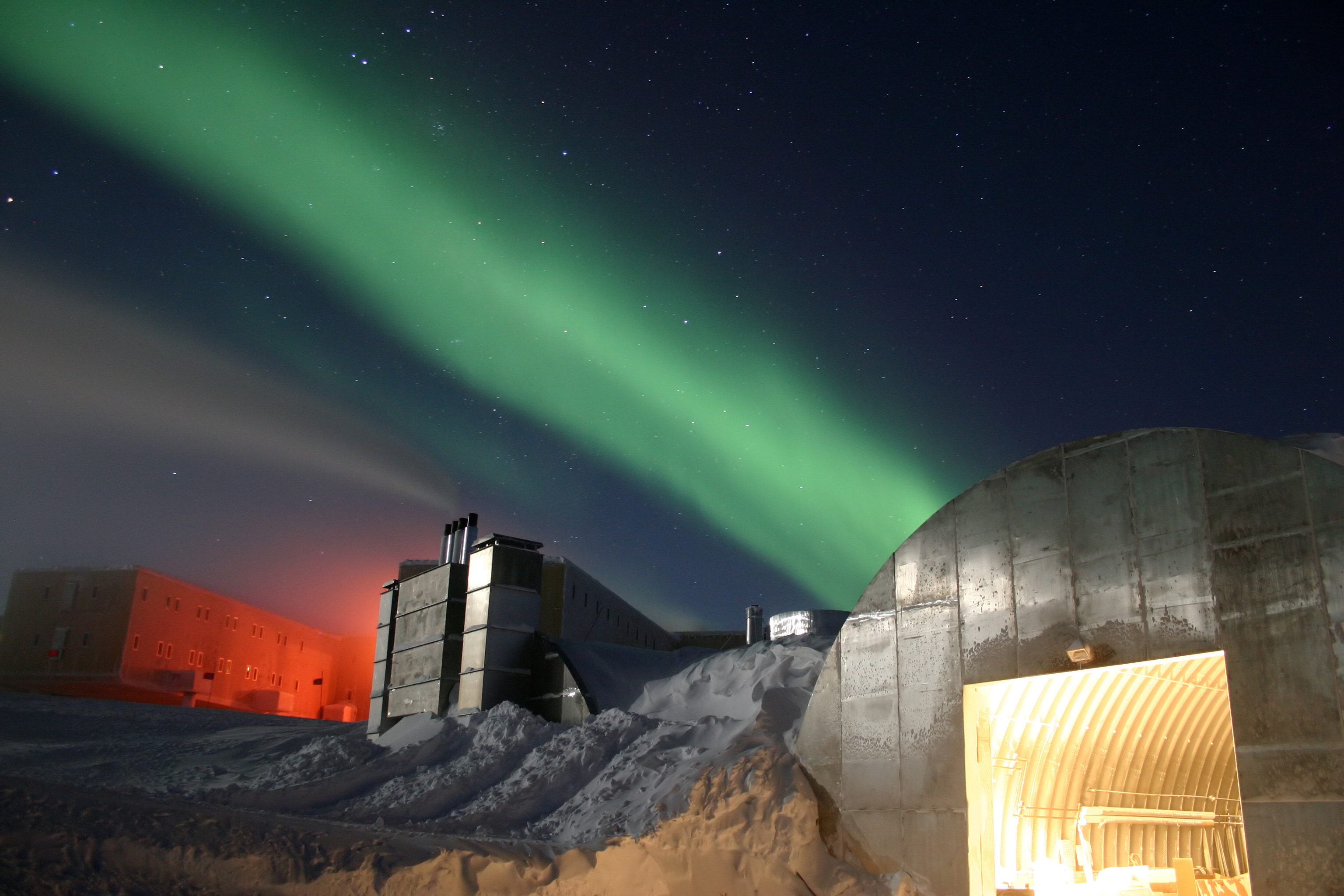 In two dimensions, we can visualize the electric field as a lattice of arrows: 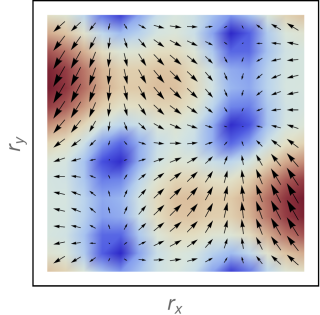 The length and width of each arrow corresponds to the field strength at the underlying point. While this representation is discrete, the electric field is continuous, and therefore can be interpolated between the arrows shown in the grid.

This relation is a special case of the Lorentz force law with B=0 (when magnetic fields are present, there is an extra term that is beyond the focus of this article).

For the purposes of classical electrodynamics, an electric field is more or less defined by this relationship in that we can put a charge at various locations, measure the force it feels, and use the Lorentz force law to calculate the electric field at each point.

A high energy muon (of charge −qp​) enters the upper atmosphere along a trajectory straight through the center of the Earth. There are two very large clouds (one directly above the other) separated by a distance of l=100 km, with an electric field of constant strength between them, that is aligned vertically.

If the muon has an incoming kinetic energy of KEi​=6.4×10−16 kJ, how strong would the electric field between the two clouds have to be in order to bring the muon to rest before it passes the bottom cloud? (Ignore breakdown reactions and assume the muon to be a stable particle.)

In the electric field, the muon will experience a force of F=qp​E. At most, the muon can travel 100 km before coming to rest, before which the field will have performed work in the amount W=F⋅d=qp​El on the muon.

Therefore, we can say that W=KEi​, and the minimal electric field strength is given by E=qp​lKEi​​≈40 N/C.

A circular ring of radius a is uniformly charged with charge +Q C at its circumference. Find the electric field acting at a point distance x from the center of the ring.

The figure clearly illustrates the idea. Let the point be P at a distance of x units from the center of the circular ring A with radius a units.

The electric field acting E on P along DF making angle θ with the horizontal can be divided into two components, namely Ecosθ and Esinθ.

The vertical component however doesn't contribute to the electric field of the point, because for any two elementary portions of the circular loop that are opposite to each other and equal will cancel. So the net electric field will be towards the x-axis.

The distance of the point from the ring is x2+a2​. Now consider an elementary length dl of the loop, the charge on which is given by dq=2πaq​dl. Thus,

as cosθ is derived from the right triangle ADP.

Now, the electric field due to the entire circular loop is given by

In addition to responding to external electric fields, charged particles give rise to electric fields of their own. Knowing the behavior of these particle fields allows us to build up our understanding to more complicated arrangements of charge, which are crucial in applying our knowledge to engineering problems.

As such, experimental physicists of the 18th century like Priestley and Coulomb carefully measured the electric field of charges in the lab. They used clever arrangements to measure the force felt by an object of charge q (test charge) when placed in the vicinity of another object of charge Q (source charge). One way to do this is to hold Q fixed (e.g. mount it on an electrically neutral stick) and measure the force felt by q as it is placed at various locations within the field of Q. After measuring enough points, an approximate picture emerged like the arrow diagram below.

One thing they found is that the force felt by q was independent of direction, i.e. the force is spherically symmetric and points directly along the vector connecting q with Q. In other words, F(r)=F(r). Another was a strong dependence on the distance away from Q. The figure below shows data for the relative strength of the force felt by q as a function of the distance from Q, as well as the curves rα for α=1,−1,−2,−3. 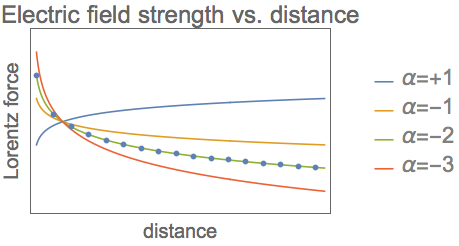 Putting all these observations together, we can say F∼r2qQ​. According to the Lorentz force law, the force felt by the test charge is given by F=qEQ​, hence F=qEQ​∼r2qQ​ and EQ​∼r2Q​, and thus we have

where k is a constant of proportionality that has been determined experimentally as 9×109 Nm2/C2. This is what's known as Coulomb's law.

While Coulomb's law is strictly true only for point charges, it is still an excellent approximation for the electric field far away from more complicated arrangements of particles. Close-up, an arbitrary arrangement of charges can have an electric field of great detail that isn't easily visualized without a computer.

However, as the scale increases, these local variations will drop off quickly, and at great distances the field will tend to look like E(x)=ki∑​(ri​−x)2qi​​≈k(rˉ−x)2Qnet​​. 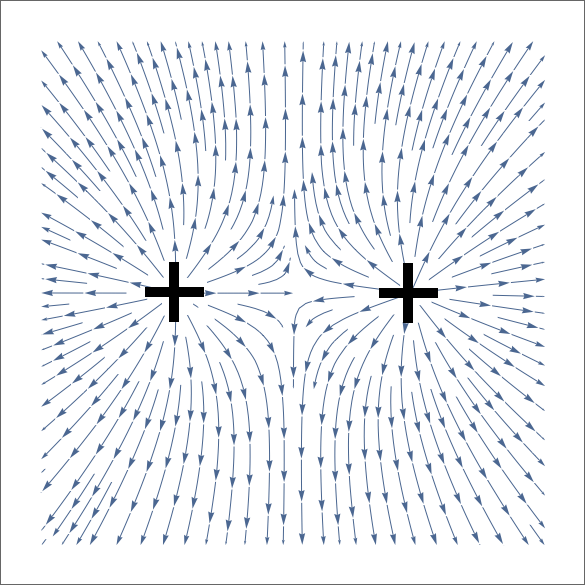 Thus, the field looks like 2kr2q​ far away from the charges, which is equal to kr2Qnet​​.

Below, we show the same dipole field as seen zoomed out by a factor of ten. The local structure of the field around the dipoles is no longer visible, and the arrangement looks roughly the same as the field for one charge of strength 2q. 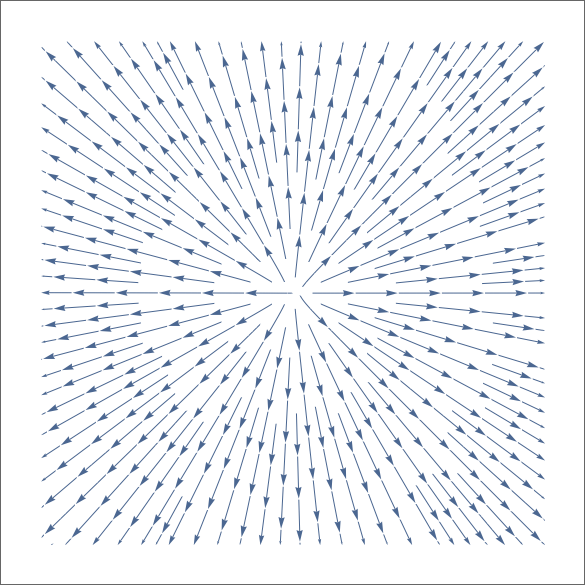 Ignore the gravitational force and the sizes of the charged particles.

Near or far, flux remains.

Coulomb's law suggests a curious quantity that ought to be the same for any spherical surface centered on a particle. If we multiply the strength of the electric field everywhere on the surface, by the surface area of the small patch of surface that the field penetrates, we get

Regardless of how big or how little the encapsulating sphere is made to be, this quantity, the field everywhere on the surface, times the surface area, will always be equal to 4πk times the total charge enclosed by the surface.

In fact, the surface doesn't need to be centered on the charge, and the surface need not be spherical. The relation ΦE​=4πkQenc​ holds for any closed surface whatsoever that encloses the charge Qenc​.

This is a rather curious observation. Could this flux coincidence have fundamental importance?

It is safe to say that the gravitational attraction of two protons is utterly insignificant next to their electric repulsion.

Given this enormous discrepancy, we might wonder when, if ever, gravitational interactions are worth considering. The saving grace for gravity is that because Coulomb forces are so strong that charged objects tend to pair up in such a way that most macroscopic objects are electrically neutral. As charge-neutral objects don't participate in Coulomb interactions, there is little Coulomb force to speak of.

On the other hand, gravity has no "negative particle," so all masses contribute to the attractive force. For very massive objects gravitational interactions can be quite significant.