Climate change refers to fluctuations in the average weather observed worldwide. The current rate of climate change can be attributed to increased carbon dioxide in Earth's atmosphere, which is a direct result of the increase in fossil fuel use over the past 200 years, a situation that will likely become more extreme as the world becomes more industrialized.

There are plenty of points to debate regarding anthropogenic climate change, as it is a geopolitical issue to which no single organization can adequately respond. They include the following:

However, the debate in the public and government bodies rarely reaches this level, because there are many misconceptions regarding the basic science behind climate change. This wiki examines and attempts to clarify some of the most common fallacies.

Climate systems are dynamic. Throughout its history, Earth has undergone several periods of warming and cooling. The temperature of Earth affects the chemical composition of Earth's atmosphere, and the atmosphere in turn can affect the temperature of Earth, and both of those factors can affect the types of organisms that can survive on the planet.

For most of Earth's recent history, it has been a cold planet covered in glaciers. The last ice age lasted nearly 2 million years and only ended within the past 10,000 years, creating the temperate climate that has supported human civilizations. The rising temperatures may be attributable to an increase in carbon dioxide in Earth's atmosphere.

There are many natural sources of carbon dioxide, including volcanoes, decomposition of dead organisms, and respiration of living organisms. The level of carbon dioxide in the atmosphere has always been in flux. However, as the graph below illustrates, data from the last half century suggest a major deviation from the historic pattern. 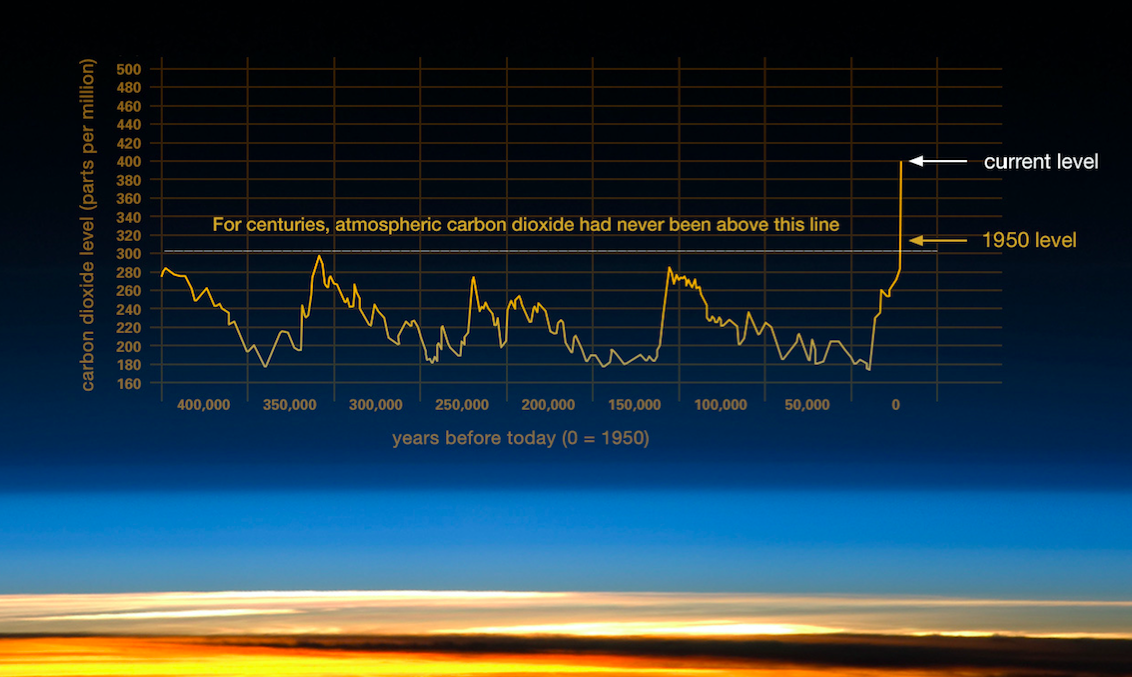 The data collected shows that carbon concentrations since 1950 are abnormal compared to historic fluctuations. [1]

Human activity Volcanoes About the same 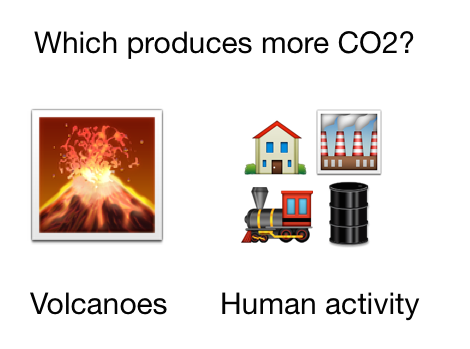 As humans add more and more carbon to the atmosphere, they are contributing to a rise in Earth's average temperature. This global warming leads to climate change. While heating and cooling cycles are a natural phenomenon, the amount of carbon humans are adding to the atmosphere is speeding the process up considerably. Rate is important: ecosystems and individual species require time to adapt to change. Sudden change can leave a once-thriving community lifeless. 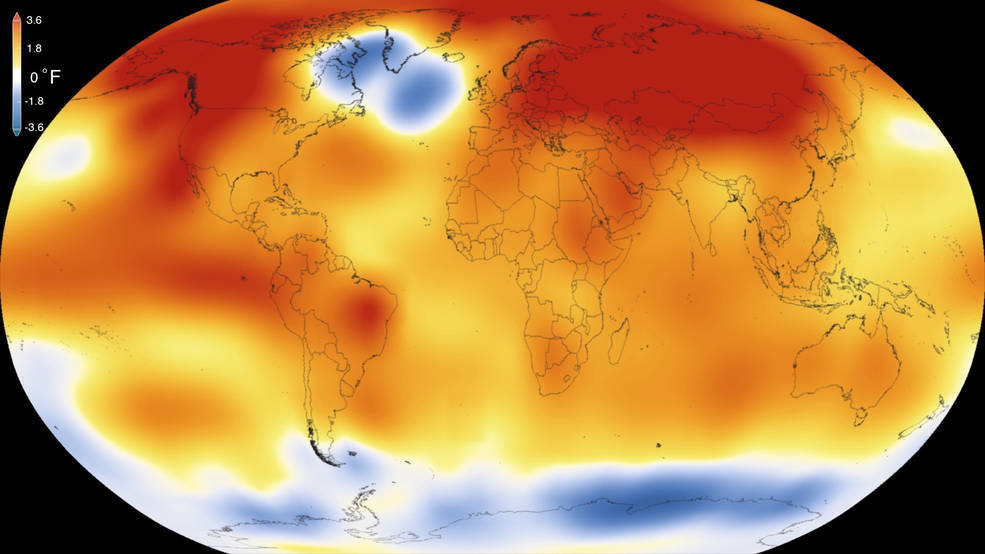 The top fifteen warmest years in recorded history have happened since 2001. [1]

In order to understand climate change and its potential impact on life on Earth, it is important to appreciate the difference between weather and climate.

Weather describes the state of the atmosphere at a given place and time, including temperature, precipitation, and air currents. It is very dynamic, and exists in the present moment.

Changes in weather are constant. In some climates, it is common to see a 40-degree Fahrenheit temperature shift over the course of a single day. Changes in climate are changes in the averages (means) of numerous measurements, so in order for the average to increase by even a few degrees, there must be a strong upward trend in the data. 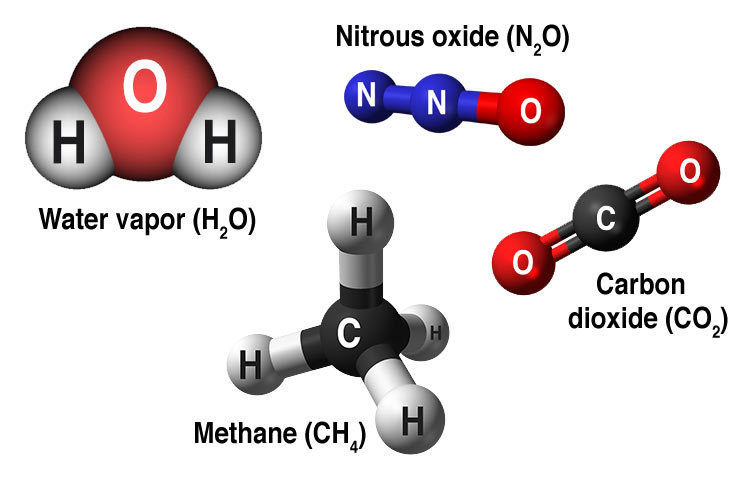 Greenhouse gases can have both natural and industrial sources. [1] A major factor in climate change is the greenhouse gas effect. Gases like carbon dioxide and methane allow the sun's energy to pass through the atmosphere to Earth's surface, but the atmosphere then traps that radiation, keeping the energy close to Earth rather than allowing it to return to space. This extra energy increases the planet's average temperature.

The greenhouse gas effect is not a bad thing, in and of itself. Life on Earth depends on energy from the sun. The atmosphere helps trap the sun's energy and uses it to warm Earth and sustain a balmy, livable climate. Water vapor is the most abundant greenhouse gas. However, it is one of the most malleable as well. Increases in water vapor increase the chance of cloud formation and precipitation, which in turn removes some of the water vapor from the atmosphere. This is an important mechanism for regulating weather and climate.

Many industrially-produced greenhouse gases are more permanent. Carbon dioxide can remain in the atmosphere unchanged for decades.

Carbon is the single most important element involved in climate change. It is the super glue of life, and the backbone of organic chemistry, because it attaches so easily to other atoms, building everything from methane to sugars to complex plastic polymers.

Oil and coal are called fossil fuels because they are the remains of ancient life, mostly small sea animals. Dead animals would sink to the bottom of the ocean, and the increased pressure would eventually liquefy them. Carbon bonds held to in the new environment, creating oil or coal. These raw materials are mined and then burned as fuel.

Carbon bonds are broken when these fuels are burned, releasing energy. Since carbon, the "super glue," is so sticky, the atoms immediately form new bonds with the oxygen in the air, creating carbon dioxide. Each carbon atom forms double bonds with two oxygen atoms, making a very stable structure that is difficult to break up. Unlike water vapor, carbon dioxide is difficult to remove from the atmosphere.

In burning fossil fuels, humans are taking carbon that has been stored deep in Earth and re-introducing it to the atmosphere. This upsets the balance of the carbon cycle, leaving far more carbon dioxide available than Earth's carbon sinks can accommodate. 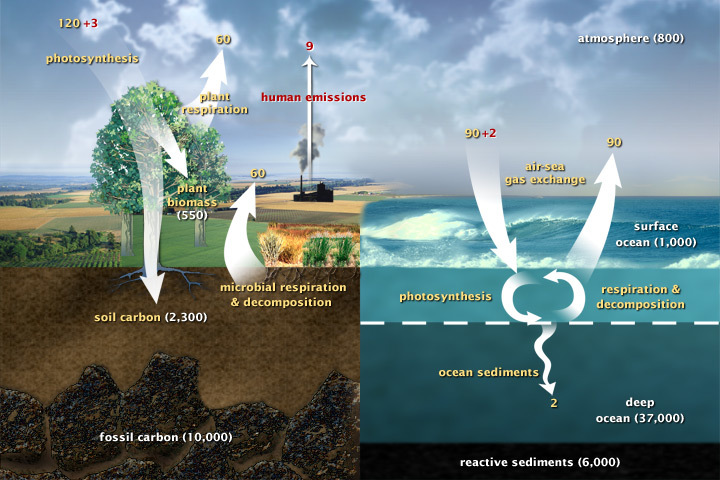 The proportion of radiation reflected back of Earth's surface is the albedo. Albedo plays an important role in maintaining the polar ice caps. Snow reflects radiation better than the darker-colored ice under it, which still reflects radiation better than the dark blue ocean. As albedo decreases, more radiation is absorbed by the ice and sea, rather than being reflected back out into the atmosphere. The more the albedo decreases, the more ice and snow melts, which in turn leads to an even greater decrease in albedo. This is known as a positive feedback loop.

One non-technical example of a positive feedback loop is the salty-snack-tasty-beverage loop. Bars often set out small dishes of peanuts or pretzels for patrons to snack on, and the salt leads them to crave a tasty beverage, perhaps a nice pint of ale. That tasty beverage in turn might make the bar patrons snacky, so they consume more pretzels. The more salty snacks they consume, the more thirsty they feel, leading to the purchase of even more tasty beverages. This cycle can continue indefinitely, or at least until last call.

Imagine you have a friend who stops by the bar for a beer and a handful of pretzels every day after work. Usually, she has one beer and goes home. However, on a particular day, she decides to order a second beer, causing her to consume twice as many pretzels as normal. Just as she is about to leave the bar, she runs into an old friend who orders her a third beer, which she accepts because she's thirsty from the extra pretzels. If this behavior is cut off early in the evening, the consequences are minor and easily reversible. However, the longer the feedback cycle goes on, the less likely the bar-goer is to go home at a reasonable hour, and the more likely she is to suffer a hangover. If she did not return to her normal routine the next day, and instead headed straight to the bar instead of to work, it would be cause for concern.

There are seasonal fluctuations in the amount of ice in the polar ice caps, and hence in Earth's albedo. 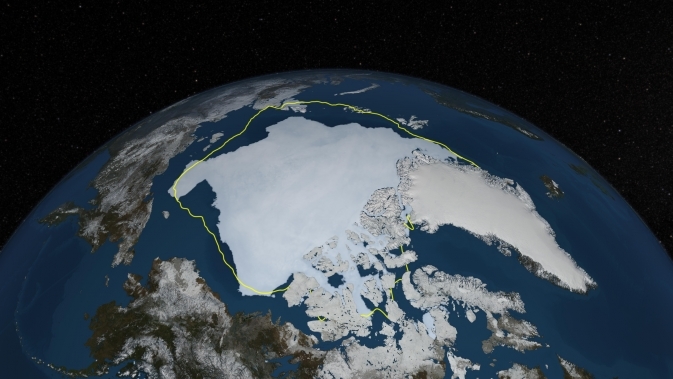 A visualization of Arctic sea ice cover, September 2013. The yellow line marks the 30-year average minimum extent. [3] However, these changes conformed to a statistical mean, and seasonal cooling increased the albedo again at the end of a cycle. The ice hit an average minimum at the end of the season, and had time to build up again before the next summer. Once this positive feedback loop strayed away from its average behavior, the chances of correcting its course decreased rapidly. The cycle continues until the greenhouse gas supply gets cut off.

Individual weather events cannot be attributed to global warning. Correlation, a relationship or connection between two events, is not the same as causation, where one event is the direct result of the other event and would not have occurred independently. It is inappropriate, for example, to say that Hurricane Katrina was caused by global warming. There is a correlation between rising average surface temperatures in the Gulf of Mexico and stronger hurricanes, but the coincidence of these two events does not prove that the warmer temperatures are causing the more intense storms. Both of these factors may be caused by a third unnamed agent. However, correlation is a first step to determining what factors affect a variable of interest.

A rancher in the American West is used to hard winters. He lives in a place where it is always snowy and windy, but this winter has been particularly cold. One February night, the temperature reaches −34∘F. The next morning, the rancher says, "So much for global warming! I'm sure glad we worry about that two-degree temperature change, it sure would have been terrible if it was −36∘F yesterday!" Explain two fallacies of his argument.

In 2015, the chairmain of the Senate Committee on the Environment demonstrated his misunderstanding of this basic idea as well. U.S. Senator James Inhofe (R-OK) brought a snowball to the senate floor during one of his speeches.

In case we have forgotten, because we keep hearing that 2014 has been the warmest year on record, I asked the chair, ‘do you know what this is?’ It’s a snowball, and it’s just from outside here. So it’s very, very cold out and very unseasonal. So there, Mr. President, catch this.

[1] The National Aeronautics and Space Administration (NASA) of the United States. Global Climate Change: Vital Signs of the Planet. Images from http://climate.nasa.gov/causes/ under Creative Commons licensing for reuse and modification.

[2] The National Aeronautics and Space Administration (NASA) of the United States. Earth Observatory. Image from http://earthobservatory.nasa.gov/Features/CarbonCycle/ under Creative Commons licensing for reuse and modification.