There are tons of types of organic reactions that occur in nature or laboratory. In this chapter only the very basic types of reactions will be introduced.

However, ethane cannot participate in an addition reaction with hydrogen, because ethane is fully saturated.

The substitution reaction, can be simply thought of replacing an atom with a different one. For example, the reaction below illustrates the substitution of a bromine atom for a hydrogen atom in benzene:

Oxidation is the process of losing electrons, whereas reduction is gaining electrons. When it comes to organic chemistry, most redox reactions involve the gaining/losing hydrogen or oxygen atoms. Gaining an oxygen atom usually means oxidation, and losing one means reduction. On the other hand gaining a hydrogen atom means reduction, while losing one means oxidation. A well known example is the oxidation and reduction of alcohols, aldehydes, ketones, and carboxylic acids. 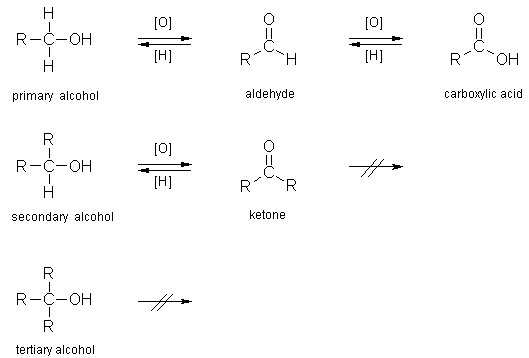 In the figure above, [O] means gaining an oxidation, i.e. oxidation. Likewise [H] means gaining two hydrogen atoms, which is equivalent to reduction. Primary alcohols oxidize to form aldehydes, which then can oxidize again to produce carboxylic acids. Reversely, carboxylic acids can be reduced to form aldehydes, which again can be reduced to primary alcohols. Secondary alcohols can oxidize once to form ketones.

120 grams of acetic acid (CH3​COOH) reacts with 68 grams of 18O-methanol (CH318​OH) to form methyl acetate. Calculate the amount of water (in grams) during this reaction. Use the atomic weights

First note that 120 grams of acetic acid is 2 moles and 68 grams of 18O-methanol is also 2 moles. Thus the esterification reaction will produce 2 moles of methyl acetate and 2 moles of water. Observe from the figure above that the 18-oxygen all stays in methyl acetate, instead of water. In other words, all oxygen atoms in the water molecules are 16-oxygen atoms, and therefore the amount of water formed is 2×18=36 grams. □​