Configurational entropy is the portion of the entropy of a system that is due to the location of the constituent particles. This is sometimes said to represent the disorder of the system.

As a metaphor, imagine two students. One student is considered disciplined and well behaved. During class, she can always be found in her seat quietly doing her work. She is considered orderly, and has a low entropy compared to her peers.

The second student, however, is not as well behaved. He is rarely in his assigned seat, can't be counted on to do his work, and at any moment he might be found in a multitude of locations around the school. This student represents disorder, and if he were a particle, he would have a high entropy compared to his peers. 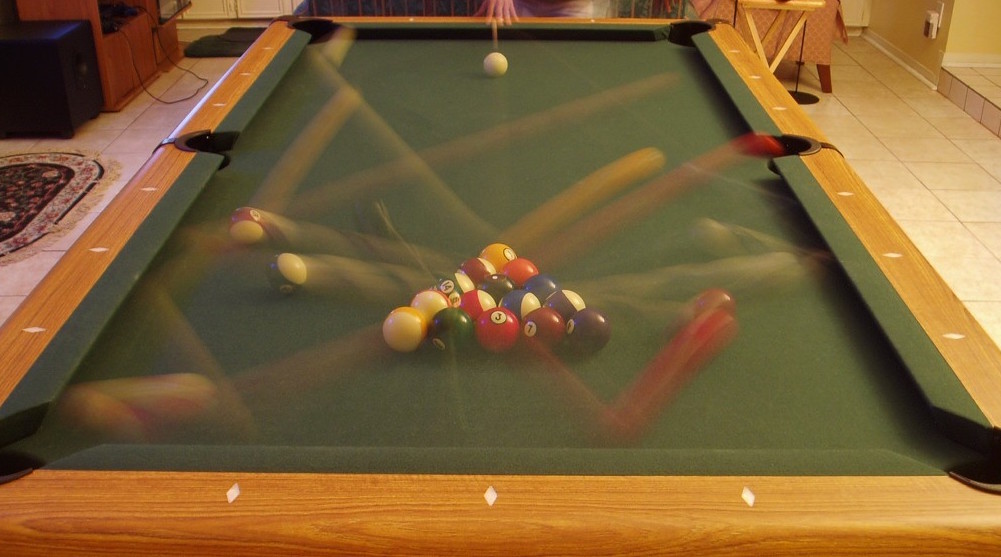 Before a game of 8-ball is started on a billiards table, the balls can only occupy one of 15 spaces within the rack. However, after the break, the balls are scattered to positions all around the table, so the entropy increases greatly. [1]

Entropy is usually increased by adding heat or energy to a system. If the number of possible locations of each particle increases, the entropy of the system increases.

A closed box of 100 particles initially has no energy. If 1 eV of energy is slowly added to the box, what happens to the entropy of the particles?

In order for the entropy of a system to decrease, the number of possible arrangements for the particles in the system must decrease, usually due to a decrease in the cumulative energy of the system.

Additionally, in order to not violate the second law of thermodynamics, the system MUST be allowed to exchange energy with some other system. On the whole, the entropy of the two together must remain constant or increase. Therefore, in order for the entropy of a system to decrease, the entropy of a connected system must increase by an equal or greater amount.

A glass of room temperature water is placed in a freezer and allowed to freeze. Does the entropy of the system increase or decrease?

Solution: Intuition says that a decrease in temperature corresponds to a decrease in entropy, but make sure the rules are satisfied.