In angular kinematics, the conservation of angular momentum refers to the tendency of a system to preserve its rotational momentum in the absence of an external torque.

For a circular orbit, the formula for angular momentum is (mass)×(velocity)×(radius of the circle): 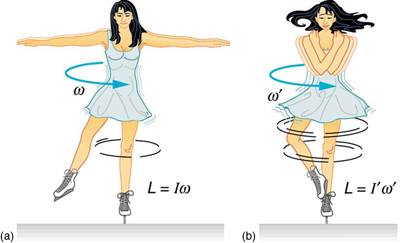 What makes the figure skater skate so fast and smooth? The reason is because she is an expert in conserving angular momentum. Let's see what happens when angular momentum is conserved:

When angular momentum L is expressed in vector form, the components of L—Lx​,Ly​,Lz​ along the x-, y-, z-axes, respectively—remain as some constants.

Plan A Plan B Both helicopters work with the same efficiency.

A helicopter-manufacturing industry, at their annual meeting, proposed to build the helicopters at a cheaper rate keeping its purpose and efficiency the same as it was before. The company has prepared two models of helicopters. Plan A has a helicopter with two propellers, and Plan B has a helicopter with one propeller. You are given the task of selecting the best one of them. Which one will you select?

The net external force acting on an object is equal to the rate of change of its linear momentum.

However, the rotational analogue of the above law can be stated as follows: