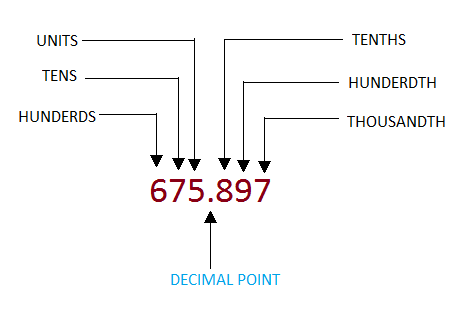 The diagram above shows how a decimal number is written and that each digit has its own unique identification. This identification is known as place value. As we move from the decimal point towards left and right, the place value gets 10 times bigger or smaller, respectively. In the above decimal, the number 8 is said to be found in the tenths or (101​)th place, and as we move one step towards right, the number 9 is found in the hundredths or (1001​)th position.

Decimal numbers are used when a whole number doesn't give enough information. Think of a decimal number as the sum of a whole number and a certain fraction. For example, suppose I say I have three and three-tenths of an apple. It can be written as 3+103​, but that can be a lot of writing; a swifter and simpler way of writing it is 3+103​=3.3 since three-tenths is found in the tenths position. We can see that the numbers found to the right of the decimal point are just a fraction of a unit. If we say twenty four and one-fifth, the decimal representation will be 20+4+51​. We know that a fraction of a number is written after the decimal point and one-fifth of a number is equivalent to two-tenths of a number, so we have 24+102​=24.2.