You should see that both ways are identical to each other. As an example, see the diagram below: 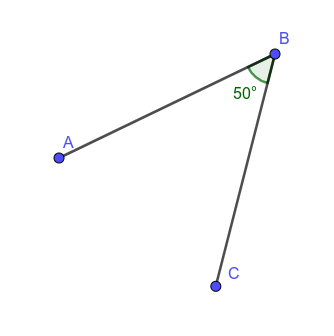 Directed angles might seem really annoying and useless at first, but soon you should find it natural and sometimes better than the normal angles.

Directed angles are useful in combining multiple cases in a statement into one. An example is shown below.

The theorem below has configuration issues; the two cases seem so different and hence we have to differentiate them. By using directed angles, we can significantly reduce the number of words used.

Let A,B,C,D be any four points, no three collinear.

Let A,B,C,D be four points, no three collinear. Then they are concyclic if and only if

Task: Make sure it works.

Let X be any point. Points A,B,C are collinear if and only if

Task: Prove this yourself. (Hint: Show that the assertion is equivalent to ∡ABC=0.)

Always remember that this doesn't work for every single case. You should always check your answer after writing it out. An example where directed angles will destroy the solution is shown below:

In the cyclic quadrilateral ABCD, let I1​ and I2​ denote the incenters of △ABC and DBC, respectively. Prove that I1​I2​BC is cyclic.

Do not use directed angles; the problem is false if A,C,B,D lie in that order.