Have you ever seen an object which seems to repeat itself when you zoom in? No? Well, today's is a great day for you. Today, you will learn about fractals.

So, you might be asking what exactly is a fractal? Well, a fractal, by definition, is a curve or geometric figure, each part of which has the same statistical character as the whole.

Fractals are useful in modeling structures (such as eroded coastlines or snowflakes) in which similar patterns recur at progressively smaller scales, and in describing partly random or chaotic phenomena such as crystal growth, fluid turbulence, and galaxy formation.

One example of a fractal is a Romanesco cauliflower: by zooming in, the smaller pieces look like the whole cauliflower on a smaller scale.

There are examples of this repeating pattern on every scale in nature, from seashells, crystals, leaves, and feathers to clouds, coastlines, mountains, and spiral galaxies. We will explore these fractal patterns and ways to describe, generate, and measure these shapes.

First, let's start with the property of fractals we observed in the Romanesco cauliflower.

Property: Self-Similarity is the property that zooming into an object produces a never-ending repeating pattern.

Another example of self-similarity in nature are the repeating patterns of crystallizing water and snowflakes. 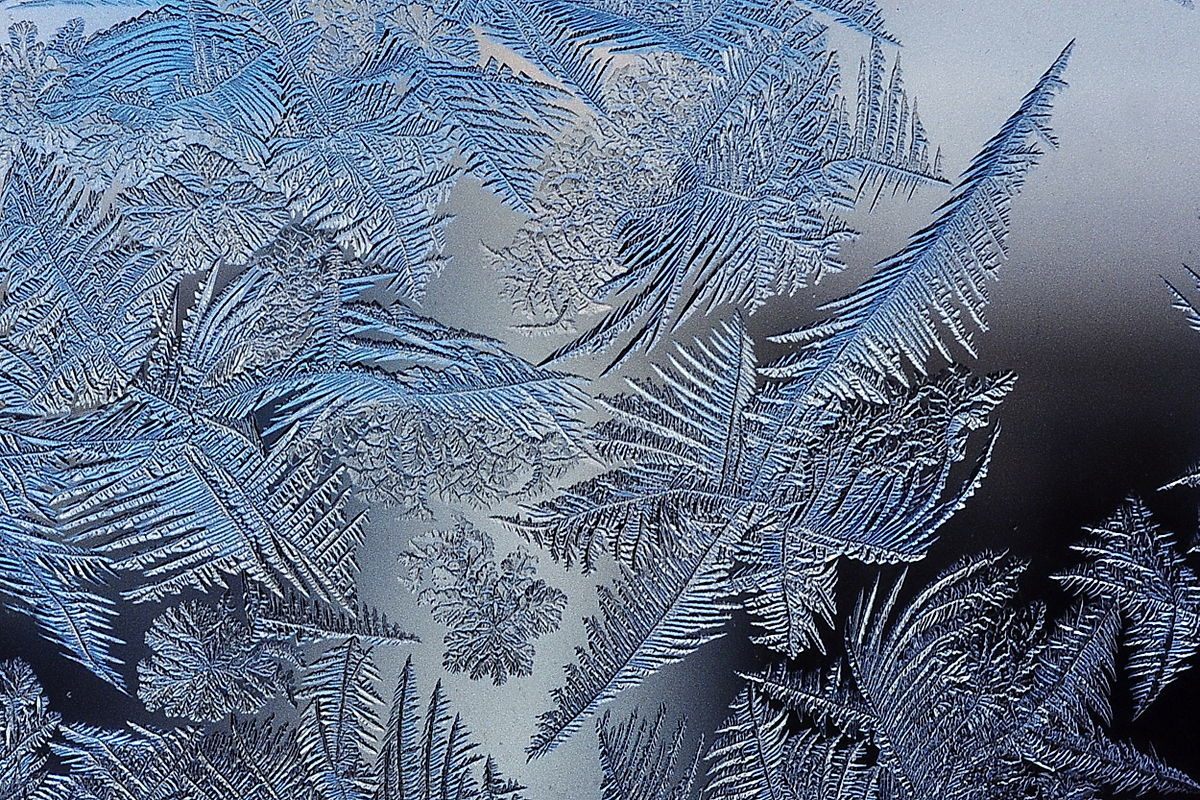 Continuing this process gives the Koch snowflake in the limit. Here is a close-up of the border after multiple iterations:

If the equilateral triangle we start with has side length 1, then notice that by replacing each line segment by 4 segments of one third the length, we multiply the length by 34​ at each step. This shows that after n steps, the length of the perimeter is 3⋅(34​)n, so the Koch star has infinite perimeter if measured as a 1-dimensional curve.

What is the area enclosed by a Koch snowflake starting from an equilateral triangle with side length 1?

The Koch snowflake shows that even though fractals are complex, they can be generated by repeatedly applying simple rules. We can think of the starting triangle of the Koch snowflake as the initiator and the step of replacing each line by a peak as the generator. If we instead start with a line segment as initiator and use the following generator, we obtain a different pattern.

These examples demonstrate the following properties of fractals.

Fractals have detail at arbitrarily small scales and display irregularity that cannot be described by traditional geometrical language.

In other words, fractals are objects which, at any magnification, will never “smooth out” to look like Euclidean space.

This approaches 0 as n goes to infinity. As with the Koch snowflake, the Sierpinski gasket should be thought of as having a dimension less than 2, and measuring it in the wrong dimension gives a meaningless answer.

Fractals also arise by repeating a simple calculation many times, and feeding the output into the input. The first such fractal we consider is named after Benoit Mandelbrot, who coined the word fractal in the 1960s to capture the idea of fragmentation at all scales.

Every complex number can be thought of as a point in a 2-dimensional complex plane. Starting with z0​=0, generate the sequence z1​,z2​,z3​,… using the equation

Consider coloring the points c in the complex plane C depending on whether or not the resulting sequence z1​,z2​,z3​,… tends to infinity. All starting values of C outside the Mandelbrot set give rise to a sequence that goes to infinity. The color of the pixels are determined by how quickly the sequence gets farther from the origin (and runs away to infinity). All points within the Mandelbrot set gives rise to a sequence whose values get smaller or alternate between a domain of fixed values. 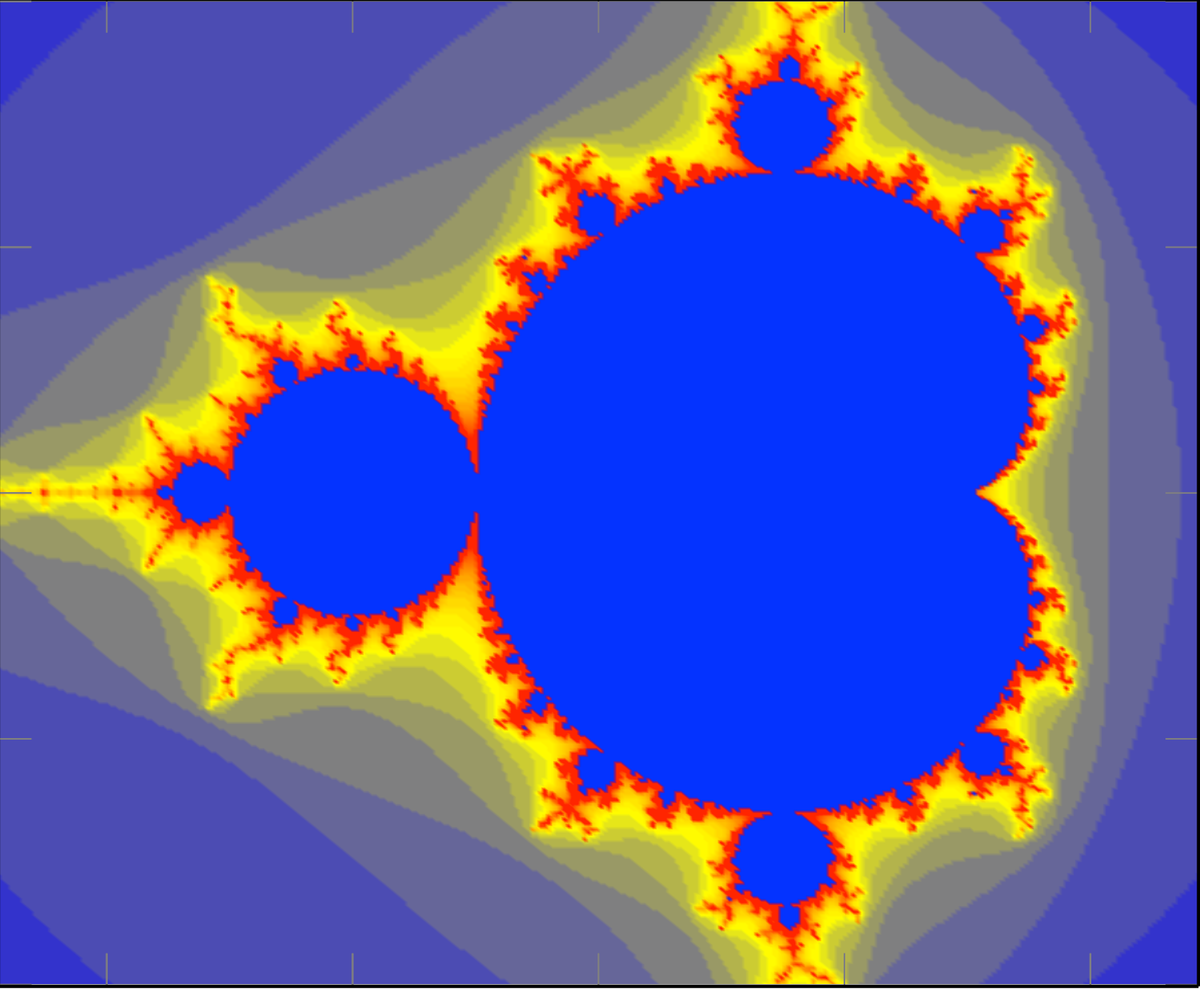 Now, rather than varying c, suppose we fix a value of c and for every point z0​ in the complex plane, again consider the sequence z1​,z2​,z3​,… generated by

Now, color in the starting points z0​ in the complex plane whose sequences do not run away to infinity. This gives rise to one Julia set for each complex number c. Here are a few examples of Julia set boundaries: 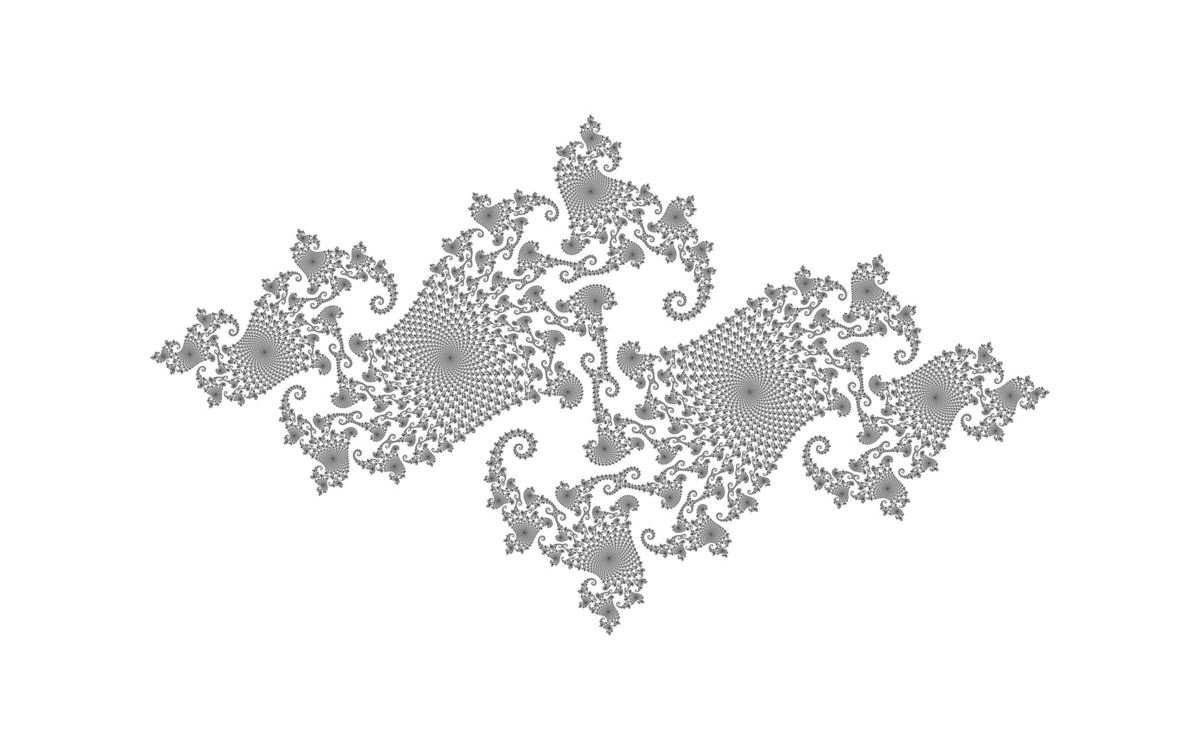 The study of fractals includes measuring scaling properties in a number called the fractal dimension. There are several different notions of fractal dimension and here we focus on a notion of fractal dimension for self-similar fractals. To gain some intuition about measuring self-similar objects, let's start by considering what happens when we scale simple geometric objects. Start with a line segment of length 1. If we take this line segment and shrink it to have length 31​, then the original line segment can be replaced by 3=31 smaller line segments. Similarly, suppose we have a square with side length 1. If we shrink the square to a smaller square with side length 31​, then the original square can be replaced by 9=32 smaller squares. Continuing in this way, if we consider a cube with side length 1 and shrink the cube to a smaller cube with side length 31​, then the original cube can be replaced by 27=33 smaller cubes. In each case, the exponent matches our intuition for the dimension of the object: the line has dimension 1, the square has dimension 2, and the cube has dimension 3.

In general, a set made of m copies of itself scaled down by a factor of r has similarity dimension logrlogm​.

Explanation: If a set is generated by m copies of itself scaled down by a factor of r, then the dimension is the number d satisfying rd=m and we have

Fractal dimensions can be attached to clouds, trees, neuron and river branchings, and gives a way to measure or describe the irregularities that are not captured by standard geometric methods.

How would you go about measuring the coastline of Britain? One possible method is the following.

Method: Your friend has a measuring tape that can measure any length α, and the two of you walk along the coast, approximating the border by line segments of length α and marking the points as you go. In the end, sum the number of line segments marked and this will give an approximate length L(α) of the coast.

As α gets smaller and smaller, we have been taught to expect the approximate length L(α) to approach the true length of the coast L. But in fact, this does not happen -- instead, we observe that for the coastline of Britain, L(α) increases without limit! When a bay or peninsula is zoomed in, there are sub-bays and subpeninsulas. Zooming in further gives sub-subbays and sub-subpeninsulas. In a rough approximation, the small and large details of coastlines are similar except for scale. 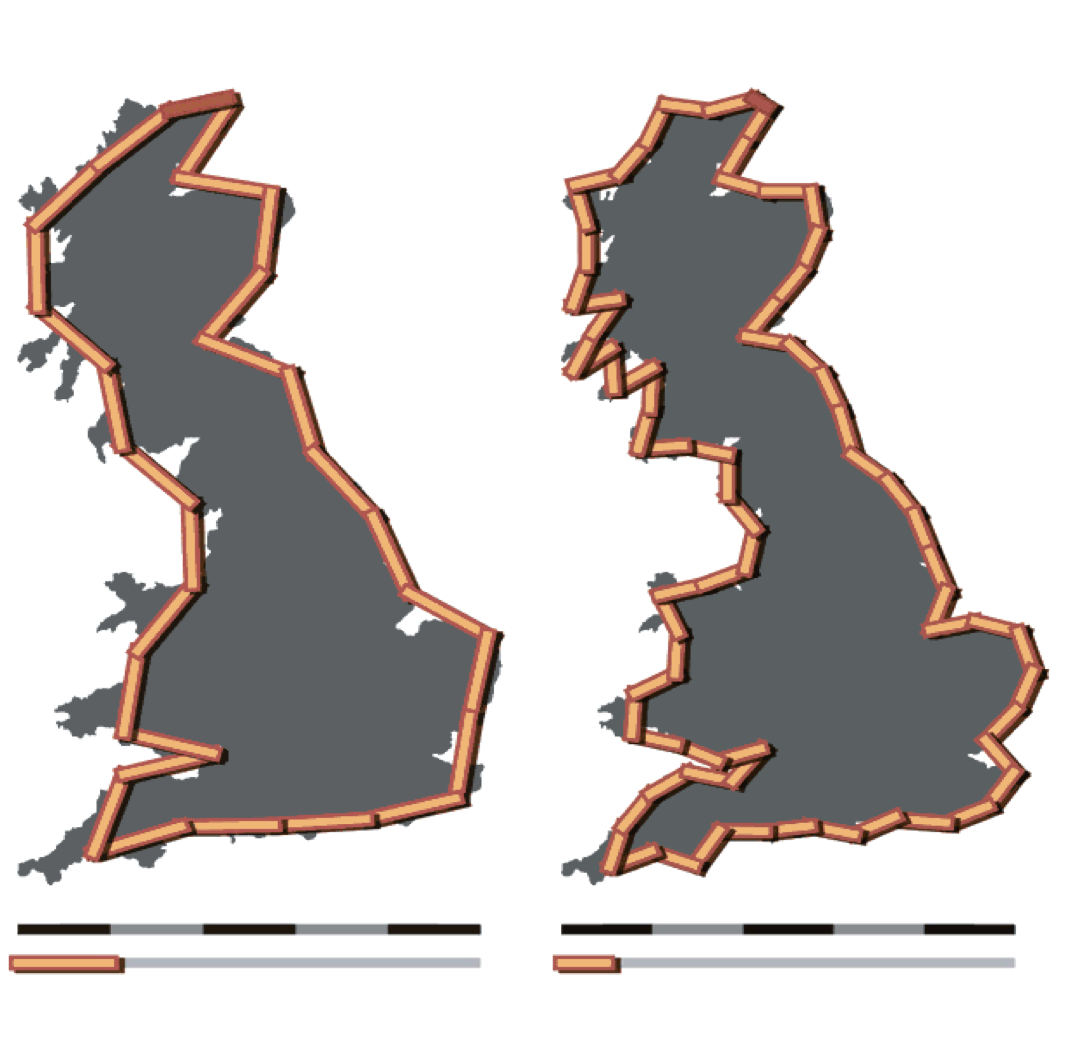 Plotting logL against logx then gives a straight line, and the slope d of this line is the fractal dimension of interest. By creating these plots for different coastlines, we can calculate the following dimensions of different countries:

If you have ever taken a long plane ride or road trip, you may have found yourself in the following self-repeating pattern! 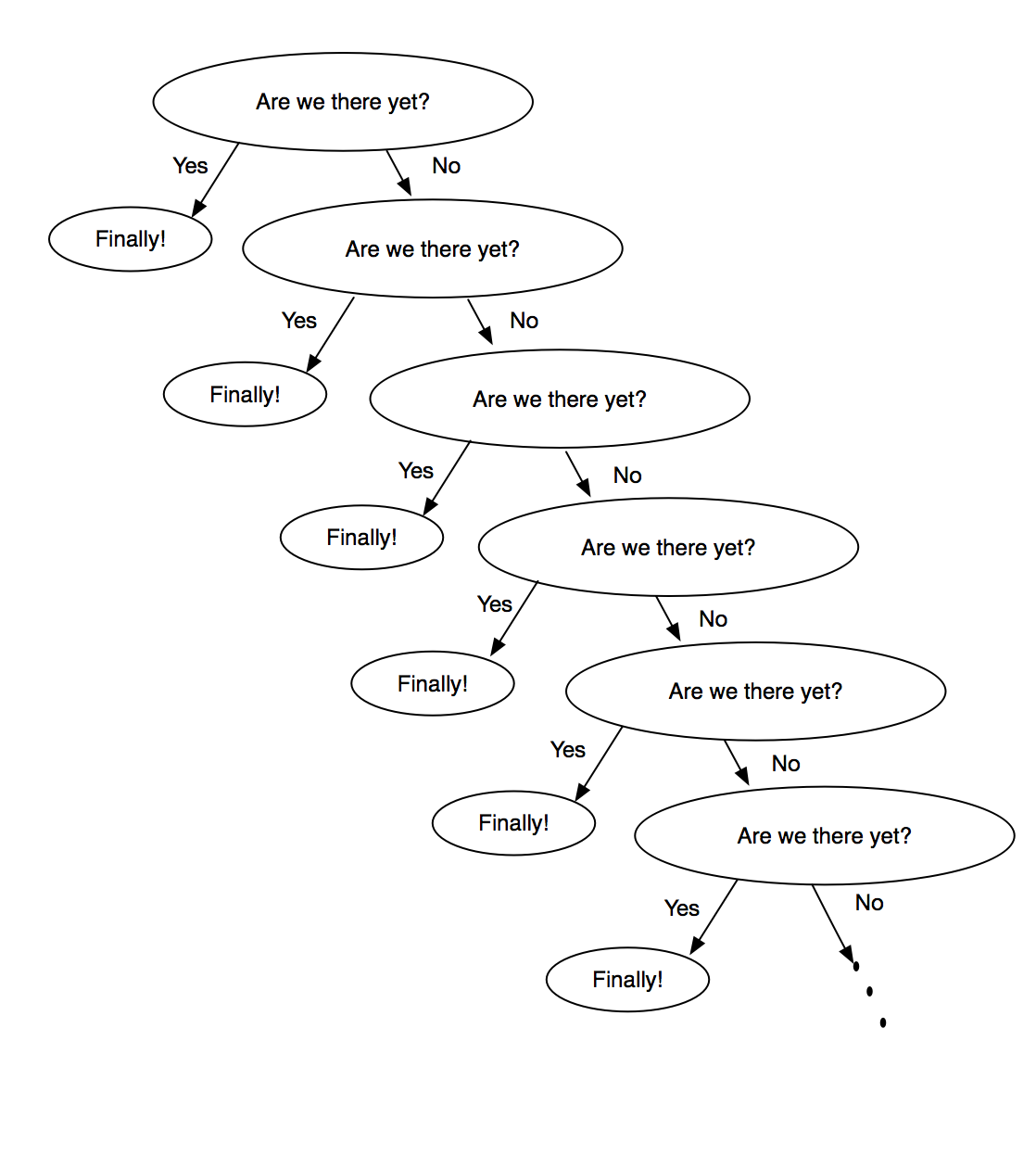 Fractals are fundamental to understanding many chaotic systems, and have many applications in sciences. They are also beautiful and mesmerizing objects, as we have seen with the Mandelbrot and Julia sets. In this section, we collect examples of fractals in all scales in nature. 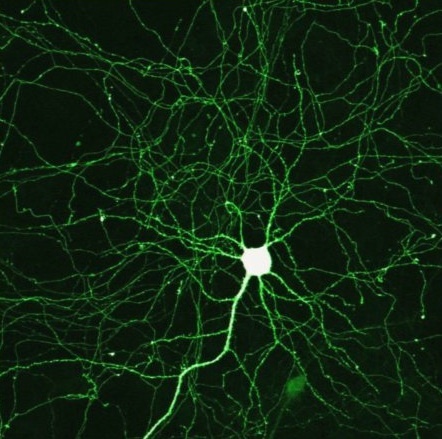 Neurons in the human cortex display fractal patterns in the branching of brain cells. 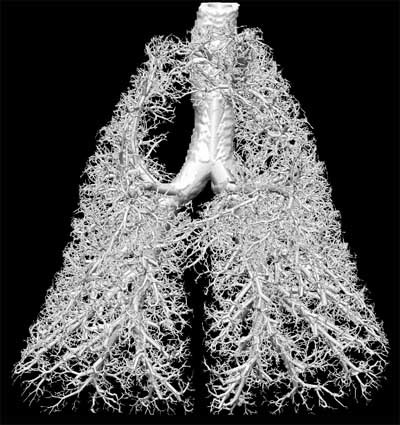 Lungs use the large surface area resulting from the branching patterns to exchange oxygen. 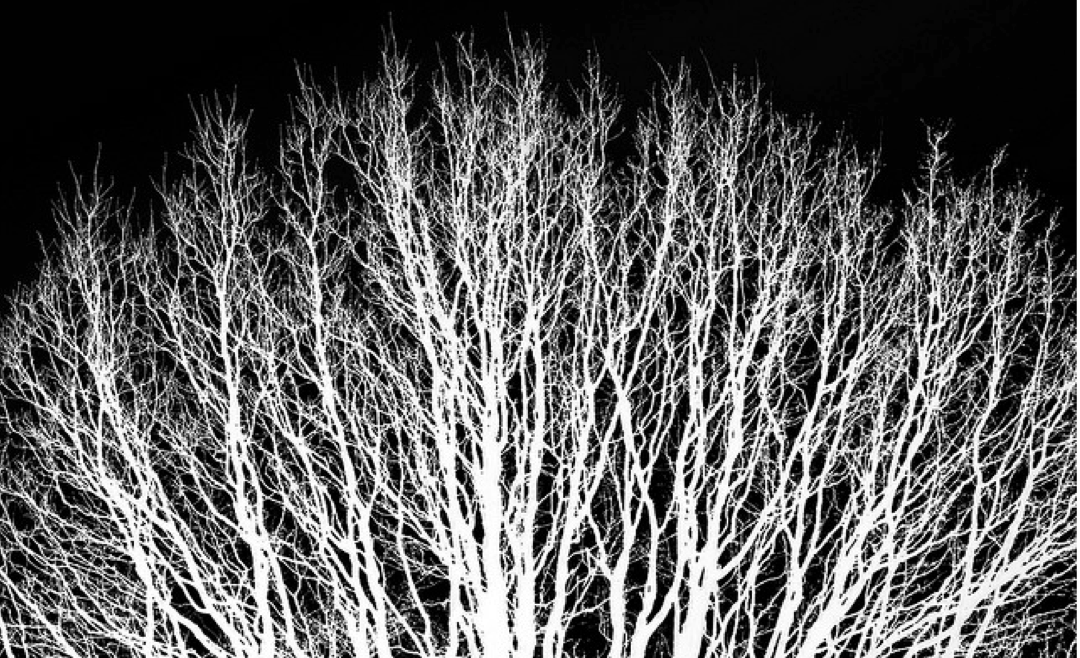 Coastlines are among the first fractals studied. 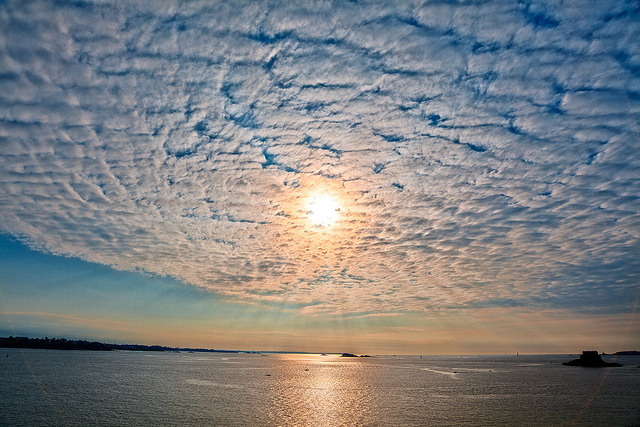 What are examples of fractal patterns you have observed?