A diagram which shows a part of a system separately, indicating all the external forces acting on it, is called as a free body diagram, or F.B.D.

Free body diagrams are convenient thought-guiding tools in analyzing the balance of forces in a mechanics problem. When objects interact, an F.B.D. can show the effect this interaction has on the motion of individual objects.

Newton's third law is an important rule to guide construction of free body diagrams. Every force drawn in a diagram has to be balanced in pairs.

The easiest case to analyze is an object that is acted on by a single force. With nothing to oppose its acceleration, it starts to move under the direction of the force. Such is the case for objects in free fall. 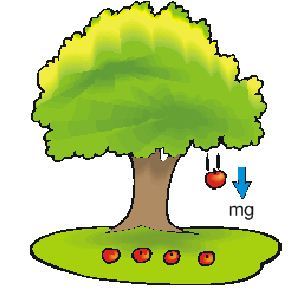 With the help of free body diagram now we can easily find the net force and hence the acceleration of apple.
Using Newton's second law, we have
Fnet​mapple​×g​=mapple​×aapple​=mapple​×aapple​.​
Therefore, the apple accelerates toward the Earth with aapple​=g.

Normal force, also called normal reaction, and indicated as Fn​, is a contact force acting on an object by a surface. The normal force always acts perpendicular to the surfaces in contact. For instance for a box sitting on an incline, the incline exerts a normal force on the box perpendicular to the angle of it's incline, with both the box and the incline experiencing a pushing force from the other. Objects and surfaces in contact always have pushing forces on the other which prevents them from merging into one another.

Draw a free body diagram of a block placed on a table. 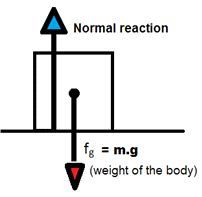 Draw a free body diagram of a ladder placed against a smooth wall and rough ground. 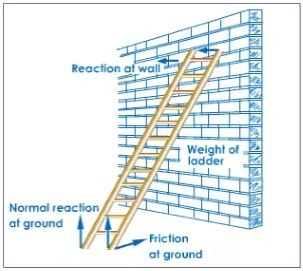 In this case, a ladder is placed resting against a wall. Now there are two contacts
(i) Ladder and the wall
(ii) Ladder and the ground
When a point is in contact with a surface, the normal reaction is perpendicular to the surface. The upper ends of the ladder are in contact with the wall. The ladder pushes the wall and in turn the wall pushes the ladder, as shown in the diagram. Similarly, the ground also pushes the lower ends of the ladder in the upward direction. To keep the rod in equilibrium there has to be a friction by the ground in backward direction, as shown in the diagram.

A block of mass m is held stationary by applying a force at an angle of θ with the horizontal, as shown in the diagram. If the wall is smooth, then what is the normal reaction by the wall? 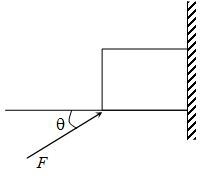 Draw an FBD of the block, showing all the forces acting on it: 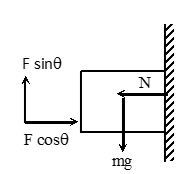 1) Gravity pulls it in downward direction.
2) The force applied can be broken down into horizontal and vertical directions.
3) The wall applies a normal reaction pushing the block away from it.

The block is in equilibrium, so the net force in all the directions is zero.

For the horizontal direction
N=Fcosθ.
For equilibrium in the vertical direction
mg=Fsinθ.
On dividing the two equations, we get mgN​N​=cotθ=mgcotθ.​

A metal sphere is hung by a string fixed to a wall. The forces acting on the sphere is shown in the free body diagram below. Which of the following statement is incorrect?

Here T is the tension in the string, R is the normal reaction by the wall, and W is the weight of the ball.