This is a wiki on Grignard Reagents, their preparatory steps, and their uses. This wiki is for all-information-Grignard. 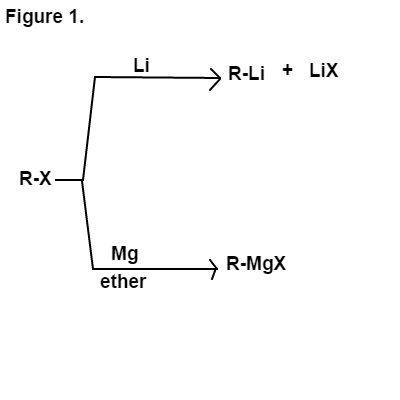 In Figure 1, a Grignard is prepared by reacting a halogenated compound with either lithium or magnesium in ether. R can be aliphatic or aromatic and X is a halogen like chlorine, bromine, of iodine.

Grignards are difficult to prepare because they easily react with the common molecules of life, as shown in Figure 2: 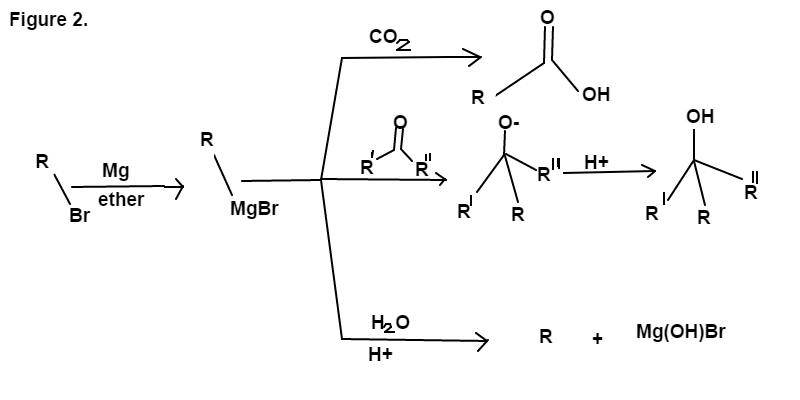 As shown in Figure 2, Grignards will become carboxylic acids when reacted with carbon dioxide, or will become the original compound (R) used to prepared the Grignard if in the pressence of dilute acid. Take special care to note the middle path for it details the typical use of a Grignard; the addition of R groups (aromatic or aliphatic) to form complex alcohols. Grignards can be reacted with aldehydes or ketones to form 2∘ or 3∘ alcohols; respectively. The key is that Grignards love attacking carbonyl groups (C=O).

Mechanism of a Grignard Attack on a Carbonyl group

Grignards attack carbonyls to form alkoxides. Note that the alkoxide must be protonated to obtain the desired alcohol. 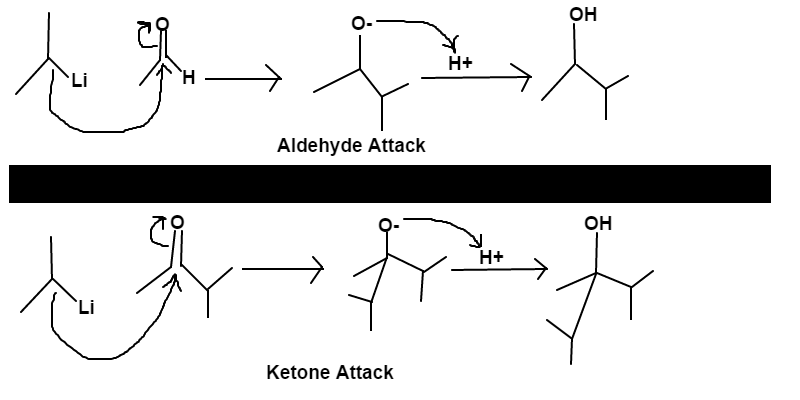 Grignards reagents have a wide and diverse range of adding aliphatic and aromatic groups onto aldehydes and ketones, but there are more compounds Grignards can also react with.

Grignards possess the ability to attack epoxide compounds; however, these reagents are selective of which carbon in an epoxide ring they will attack. 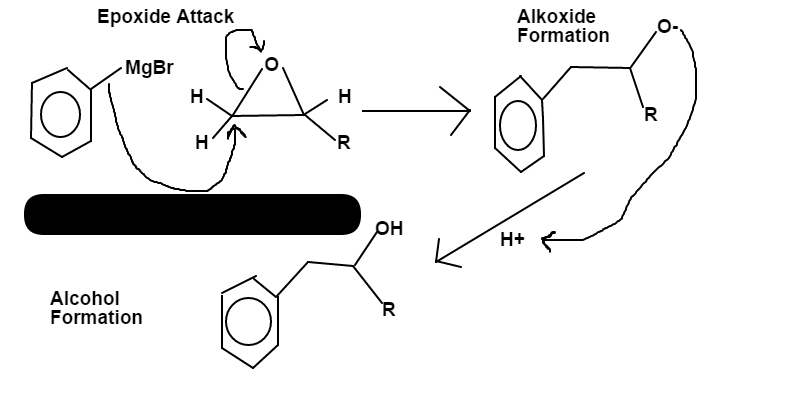 Take note the the Grignard in the image above attacked the least substituted carbon in the epoxide ring, which opened up the epoxide ring to form a 2∘ alkoxide. After protonation, the desired alcohol was produced.

Grignards further possess the property to form ketones when mixed with nitriles, as shown below 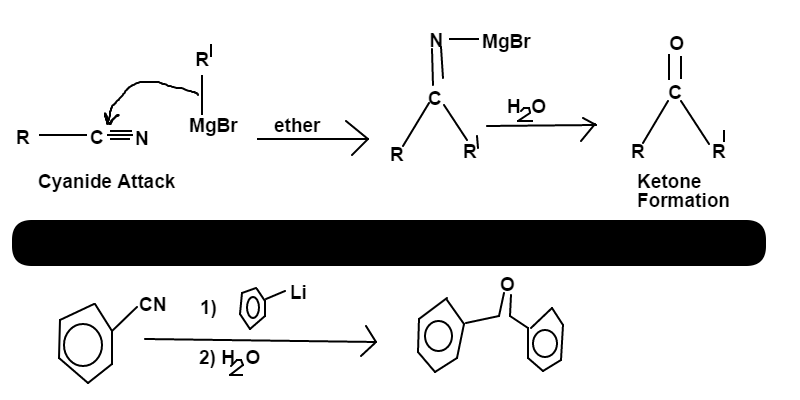 In some cases, two Grignard reagents will attack a compound, allowing for twice the addition of aliphatic or aromatic groups.

The carbonyl is in esters is still a desirable target for Grignard attack, but the first attack results in the release of the other half of the ester while maintaing the carbonyl. This allows a second Grignard attack to occur. The image below diagrams this double attack found with esters. 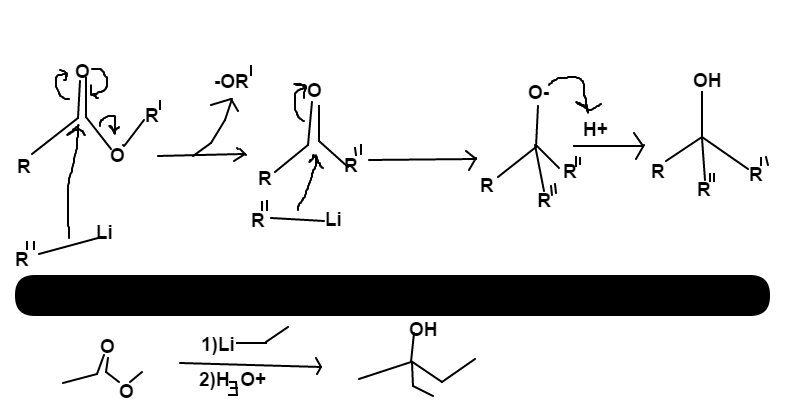 Acid Halides are attacked in a similar fashion to esters. The halide group is an excellent leaving group; therefore a single Grignard attack will leave the carbonyl intact, allowing a second Grignard attack to occur. 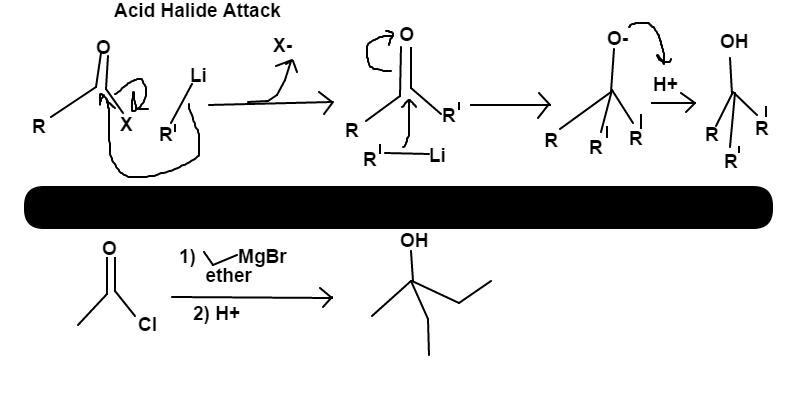 Anhydrides are attacked by Grignards in a similar fashion to esters and acid halides; therefore a quick diagram will be used to model ethyl-lithium attacking ethanoic anhydride. 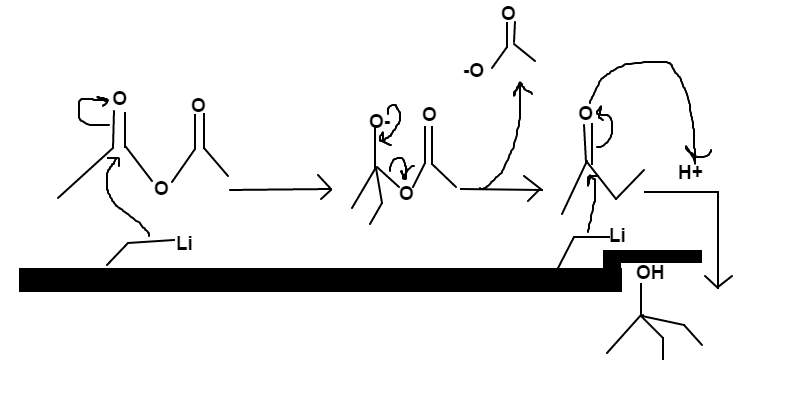 Once again the carbonyl is protected from the first Grignard attack due to the presence of an excellent leaving group. This leaves the product from the first attack primed for a second attack.

There are further uses of Grignards that are rather nonsensical. For example, attacking a carboxylic acid with a Grignard will effectively give back the compound that was used to prepare the Grignard reagent.

Notice how mixing a Grignard with a carboxylic acid simply returns the R group of the Grignard. 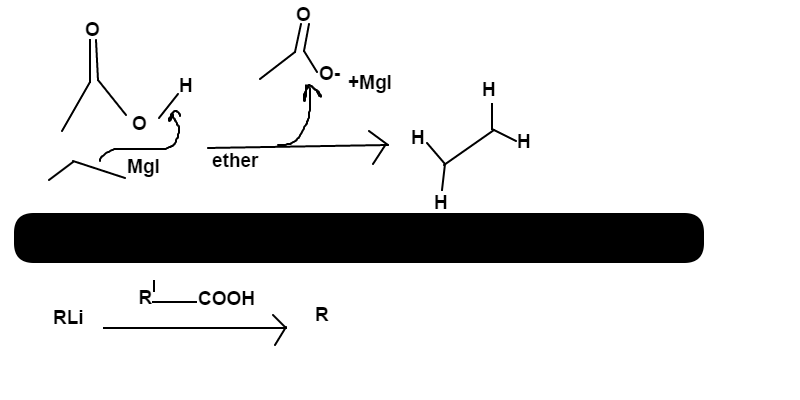 Lactones are the name of esters that are embedded into the meshwork of a ring. Grignard reagents will attack lactones in a similar way to non-ring esters, but there is a little more chemistry to worry about since the components of the ester remain attached to the rest of the ring. 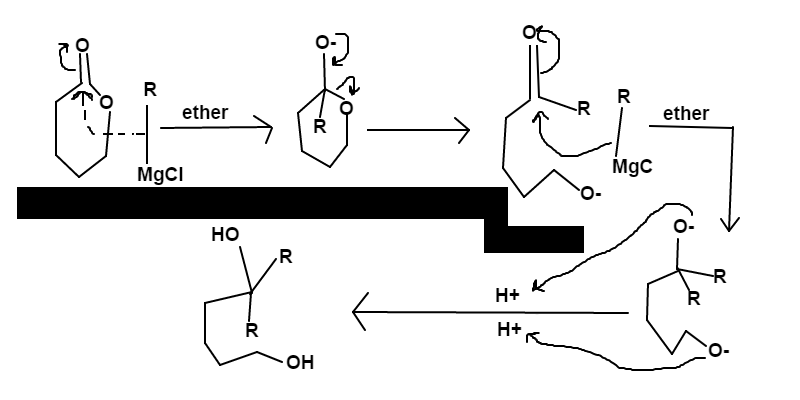