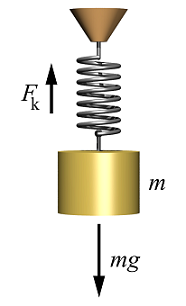 Restorative force of a spring opposes the force of gravity pulling a mass downward [2].

Hooke's law is an empirical physical law describing the linear relationship between the restorative force exerted by a spring and the distance by which the spring is displaced from its equilibrium length. A spring which obeys Hooke's law is said to be Hookean. In addition to springs, Hooke's law is often a good model for arbitrary physical systems that exhibit a tendency to return to a state of equilibrium quickly after perturbation.

If a Hookean spring is compressed or extended by some displacement x from equilibrium, the spring will exert a force proportional to this displacement in the opposite direction:

The proportionality constant k, called the spring constant, is dependent on the stiffness of the spring, which in turn depends on its shape and the material from which the spring is made.

How can Hooke's law be used to determine the mass of an object?

Given a Hookean spring of spring constant k, fix one end of the spring to the ceiling and the other end to the object. In equilibrium, the spring force will balance the downward force of gravity on the object, which allows computation of the mass m from the displacement x of the spring.

Gravity exerts a force Fg​=mg downward proportional to the mass m of the object, which is perfectly matched by the spring force Fs​=−kx in equilibrium, where the negative sign indicates that the spring force acts in the opposite direction. The mass is obtained by setting these forces equal:

The linear relationship of Hooke's law empirically holds only for small displacements x. For large deformations, a spring or other Hookean material can be permanently distorted and exhibit a nonlinear restorative force.

In one dimension, the potential energy of a spring can be obtained from Hooke's law by integration:

A mass m attached to a Hookean spring of spring constant k is pulled so that the spring is displaced a distance x from equilibrium. The mass is then released and allowed to oscillate at the end of the spring. What is the maximum velocity of the mass?

If a spring is compressed or extended and then released, it will oscillate (indefinitely if friction is neglected; otherwise, the spring will eventually return to equilibrium). The oscillation of a mass m on a spring can be derived directly from Newton's second law of motion, F=ma. Since acceleration is the second derivative of velocity, setting the force equal to the spring force F=−kx yields

where dots indicate time derivatives. The coefficient mk​ is often denoted as ω02​, the square of the natural frequency of oscillation of the spring. This is because the general solution to this equation of motion is

for some constants A and B depending on initial conditions. 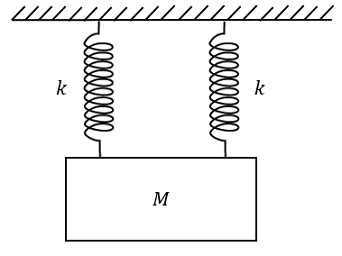 A mass M, suspended by two springs each of spring constant k as in the diagram, is compressed upwards a displacement L from the equilibrium length of the springs and allowed to fall under the influence of gravity. Find the subsequent displacement as a function of time.

The mass obeys the equation of motion of the simple harmonic oscillator where the coefficient k is replaced by 2k since there are two spring forces acting directly on the mass. The displacement x therefore obeys the equation

Plugging into the general solution above, these initial conditions yield

The solution is thus uniquely fixed to be

Show that a circuit with an inductor and capacitor, called an LC circuit, obeys the simple harmonic oscillator equation.

The solution to the equations of motion above, in terms of cosines and sines, will continue to oscillate forever. However, real oscillators eventually return to a stable equilibrium. This is because real oscillators feel damping forces which remove energy from the system.

Almost any physical system with a stable equilibrium state is described well by Hooke's law when it is displaced slightly from equilibrium. To see why, it is useful to consider potential energy diagrams, which graphically display the potential energy of a system in different states. 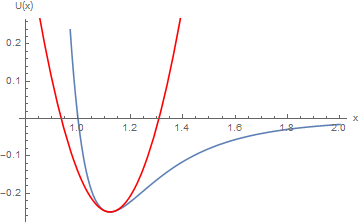 In blue, a potential energy diagram for some physical system. In red, the harmonic oscillator potential approximation about the stable equilibrium point.

The above diagram plots in blue the potential energy U(x) of some system as a function of location x. A state of sufficiently low total energy in this system will not have enough kinetic energy to escape the potential well around the minimum of U(x). The minimum x0​ of U(x) is thus an equilibrium state. Futhermore, it is stable: if the system starts at x0​ and is perturbed slightly, it will tend to exert a restorative force towards x0​.

As a result, Taylor expanding the potential energy about the minimum yields

The first term, U(x0​), is just a constant energy shift. The quadratic term is the lowest-order term that describes how U changes with x. This quadratic potential exactly matches the form of the spring potential Us​=21​kx2. Therefore, near the equilibrium point x0​, the behavior of physical systems can be well approximated by simple harmonic motion, i.e. a force obeying Hooke's law. Above, the quadratic approximation to a potential at its minimum is plotted in red.

For a system with multiple interacting masses, it is useful to define the reduced mass μ by

The frequency of oscillation ω0​ about the minimum of a potential is then, in analogy to the Hookean spring,

The Lennard-Jones 6,12 potential is used to model the interactions between two neutral atoms. The potential contains an attractive r61​ term for the van der Waals interaction and a repulsive r121​ term that models the exchange force due to the Pauli exclusion principle:

The reduced mass of the system is μ=2m​. The frequency of oscillation about equilibrium is therefore

A particle of mass m moves in a potential given by U(x)=x21​−x1​. Find the (angular) frequency of small oscillations about equilibrium.

[2] Image from https://upload.wikimedia.org/wikipedia/commons/5/5a/Mass-spring-system.png under Creative Commons licensing for reuse and modification.