In this problem, the balls are modeled as identical objects, and the children are modeled as distinct bins. The distributions can be listed exhaustively, as below: 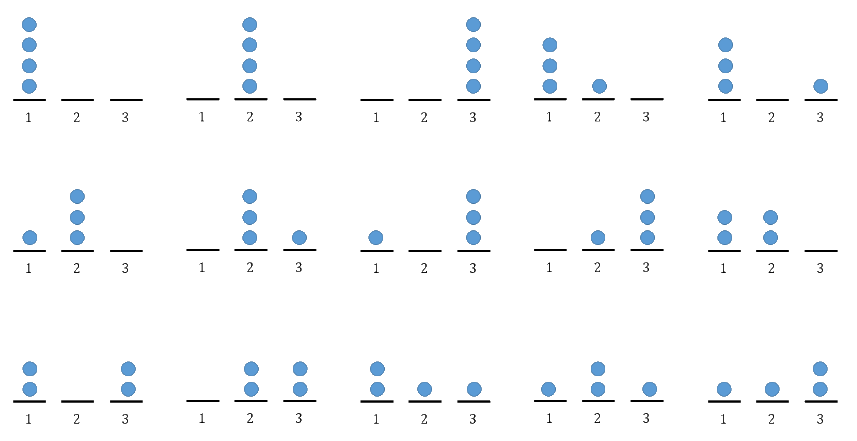 In all, there are 15​ distributions.

Imagine the 4 objects in a line, shown here as stars:

The objects can be divided into bins by placing a bar either between the stars or at the ends:

Placing 1 bar creates 2 distinct groups. Placing the bar at one of the ends will create a group with 0 stars.

Placing bars next to each other creates a group with 0 stars.

As a general rule, if we would like to divide the stars into r distinct groups, this will require r−1 bars.

Back to the problem of distributing 4 identical objects among 3 distinct groups. Modeled as stars and bars, there will be 4 stars and 2 bars. There are 4+2=6 things that need to be placed, and 2 of those placements are chosen for the bars. Thus, there are (26​)=15 possible distributions of 4 identical objects among 3 distinct groups. This is consistent with the answer from before.

There are 5 stars and 4 bars to be arranged in the 9 spaces pictured below. One possible arrangement is shown.

How many possible arrangements are there?

Suppose there are n identical objects to be distributed among r distinct bins. This can be done in precisely (r−1n+r−1​) ways.

There are 10 identical bananas that are to be distributed among 5 distinct monkeys. How many ways are there to distribute the bananas?

In this example, there are n=10 identical objects and r=5 distinct bins. Using the formula above, there are (414​)=1001​ ways to distribute the bananas.

In a fish tank, there are 4 distinct fish. You spread 10 identical food pellets into the tank.

How many distributions of food pellets among the fish are there?

The previous problems and examples covered situations in which bins could be left empty. Now consider how the problem changes when bins are required to be non-empty. Fortunately, a similar approach can be used.

Consider a problem in which we are attempting to find the number of distributions of 8 identical objects among 5 distinct bins, and bins cannot be left empty. Modeling the problem as stars and bars, it would start off by looking like this:

Just as with previous examples, the number of bars will be 1 less than the number of bins. So we have 4 bars to place. Where can they be placed? If you recall from the previous example, if bars were put at the ends or next to other bars, it created empty groups. So in order for there to be no empty groups, bars can only be placed between the stars, and only one bar can be placed between a pair of stars.

There are exactly 7 potential locations that meet these criteria. In other words, 1 less than the number of objects. Out of these 7 potential locations, 4 bars are placed. Thus, there are (47​)=35 possible distributions of 8 identical objects into 5 distinct non-empty bins.

Suppose there are n identical objects to be distributed among r distinct non-empty bins, with n≥r. This can be done in precisely (r−1n−1​) ways.

For this type of problem, n≥r must be true. If n<r, then there are not enough objects to fill each of the bins with at least one object.

Modeled as stars and bars, there are n stars and r−1 bars to place. In order for the groups to be non-empty, the bars can only be placed between the stars, and only one bar can be placed between a pair of stars. Thus, there are n−1 possible placements for the bars. Out of those n−1 possible placements, r−1 are chosen for the bars. Hence, the number of possible arrangements of stars and bars is (r−1n−1​). Equivalently, there are (r−1n−1​) distributions of n identical objects into r distinct non-empty bins.

A teacher has 12 identical pencils to distribute among a classroom of 9 distinct students. How many ways are there to distribute the 12 pencils such that each student gets at least one pencil?

In this example, there are n=12 identical objects to be distributed among r=9 distinct bins. Using the above formula, the number of possible distributions is (811​)=165​.

You are at a party with 4 of your friends (5 distinct people in total). You order a 12-cut pizza (12 identical slices).

How many distributions of pizza slices are there if each person gets at least one slice of pizza?