Free body diagram is the diagrammatic representation of all the forces acting on a body. They are applied in mechanical engineering very commonly. This wiki deals with the following topics: 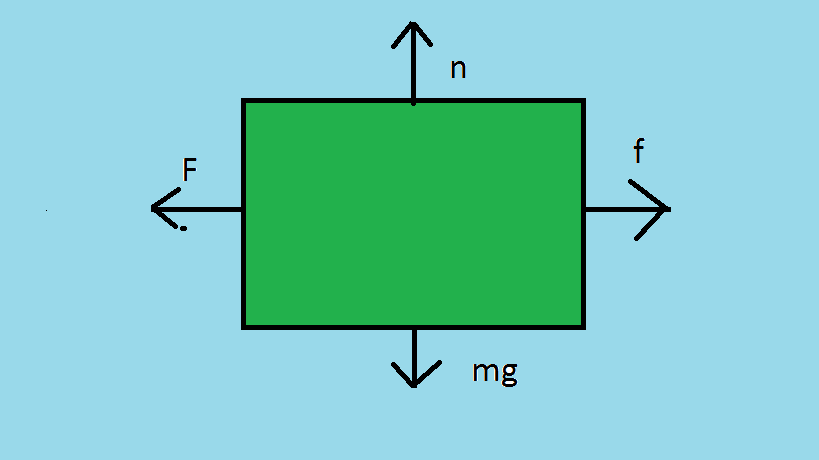 Forces do not have to act necessarily like this. They could act on angles for that matter, but just to explain it to you, we will put it this way: the sum of horizontal forces for an object in equilibrium, whether at a constant velocity or at rest, will be zero. That means that if an object is going at the same speed, it will have a net force of zero because it is not accelerating, by the formula F=ma, in which a=0 means F=0. If an object does undergo acceleration, it will have a force acting on it. For an object that is going horizontal not in the air but on the ground, its vertical forces will be equal to each other.

These equations will illustrate everything to you:

An inclined surface is something that looks like this (what, you wanted a complex definition?):

A driver forgot to put the handbrake on his sports car. Now it is accelerating down an icy slope with negligible friction. If the weight of the car is 980 N, and the hill has an inclined angle of 30∘, find the force at which it is going down. 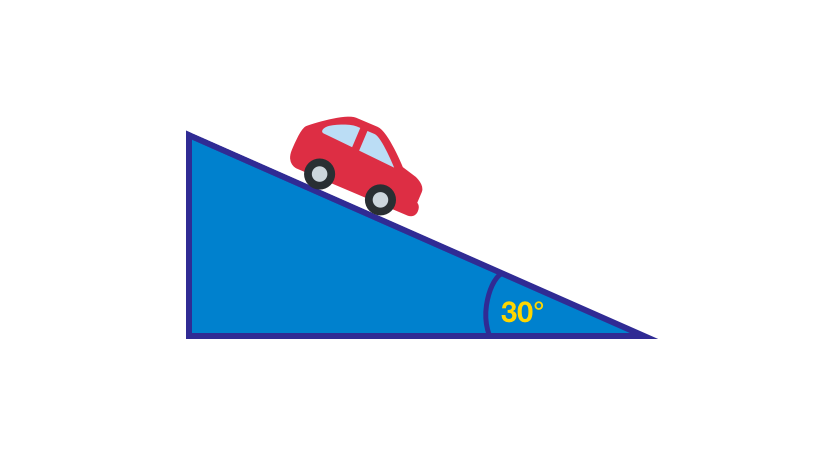 Strategy: Since we know weight is a vector and the inclined surface is at 30∘, we can use what we were taught in defining the inclined surface, to solve this problem. That means taking vector components of the vector and finding the component acting along the slope (since it is parallel to the force acting on it); let's call it x. Then

Well, I hope that gives you an idea, but most objects you will be dealing with will never be this easy (but if you understand this part, that is a major big step, so pat yourself in the back). The hard part is that you will have to consider other forces acting on, which are usually air resistance and friction, which take us go to our next topic.

Friction is simply the resistance to movement. It is a contact force.

Kinetic Friction: Usually, when you are first introduced to friction, it is the force that tries to stop the object from moving (don't forget the good things about friction). Well, that is called kinetic friction, the opposing force of an object while it is in motion.

There are rules relating to the movement of friction:

This proves the fact that static friction is always greater than kinetic friction. Don't worry about this table because no one is asking you to memorize it. They usually give it to you in the question; sometimes you have to calculate the coefficient of friction.

Firstly, we have to know these formulae:

This means that the body doesn't move till a minimum force of 4 N is applied. So, in this case, since a force greater than 4 N is applied, the body is in motion and the friction which now comes into play is the kinetic friction.

Therefore, the frictional force acting on the body is 2 N. □​

A car moves with a uniform velocity of 54 km/h on a rough, horizontal road with coefficient of kinetic friction 0.75. When it sees a child standing on the road 20 m ahead, he applies brakes to bring the car to rest in some distance. How far is the child from the car when the car is at rest? (Assume that g=10 m/s2.) 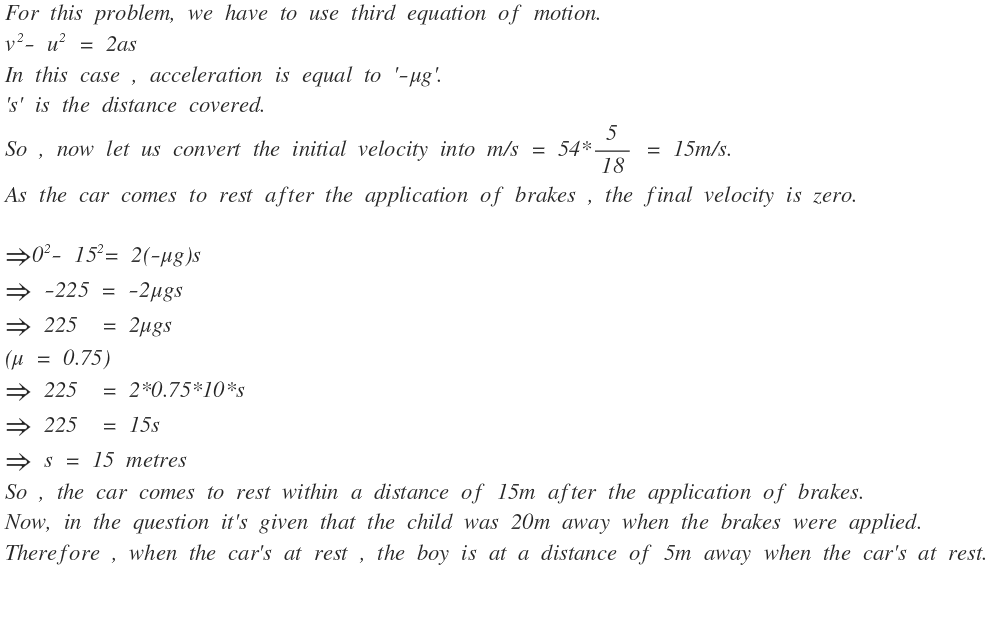