Note: this wiki is currently under construction.

Ionization energy, once called the ionization potential, is the amount of energy a neutral, gas phase atom in its ground electronic state must absorb in order to remove the outermost valence electron; resulting in a cation. It is a measure of how tightly an element holds onto its electrons. Ionization energy is found using an electric discharge tube containing gas phase atoms. An electric current is applied and increased until the voltage reaches a level sufficient for gaseous atoms to eject electrons. The voltage at which electrons are ejected is the ionization energy. 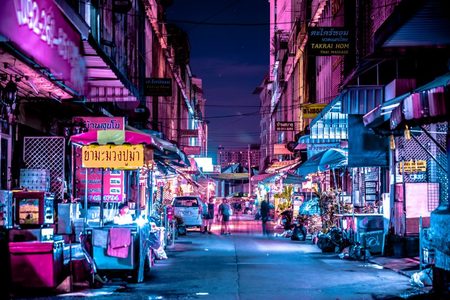 Comparing the ionization energies of different atoms tells us why certain bonds occur and how much energy is associated with them. Using ionization energies, we can understand which compounds will have weaker covalent bonds or stronger ionic bonds.

Let’s consider hydrogen. Hydrogen’s first ionization energy, the energy required to remove the first electron, can be represented as such:

In 1913 Niels Bohr proposed a model to explain this phenomenon that had been experimentally observed by Rydberg. In Bohr’s model, the electron follows a quantized, circular path around the nucleus where angular momentum is limited to integral multiples of h/2π=ℏ. This leads to the correct prediction that the energy of the electron’s orbit is given by:

This general expression is found to be equivalent to the experimentally determined Rydberg equation R∞​=k/hc, where h is Planck’s constant, c is the speed of light, λ is the wavelength of the radiation.

When an ion is formed by an orbiting electron getting ejected from the atom, this ejection can take a varying amount of energy. You can think of this so-called ionization energy as "how difficult" it is to remove an electron from an atom or how tightly an atom holds on to an electron. If the ionization energy is high, it means that

Bohr’s model provided much of our current insight into the behavior of electrons despite being found to be correct only for the hydrogen atom and others involving only a single electron such as ions HeX+, LiX2​X+, BeX3​X+, etc. Later developments utilizing quantum mechanics have since provided a more complete picture of the atom.

The classic example of using first ionization energies to predict bond type is that of NaCl:

Apart from the energy differences, there are quick tricks we can use to predict bond type and strength by looking at properties exhibited in the periodic table. As you follow a period from left to right across the periodic table, each element has an additional proton in its nucleus and positive charge increases. While following the same period, each element has additional electrons that are in the same electron shell – and electronic attraction to the nucleus increases. As the increasingly positive nucleus pulls the electron shell closer to itself, atomic radius decreases. 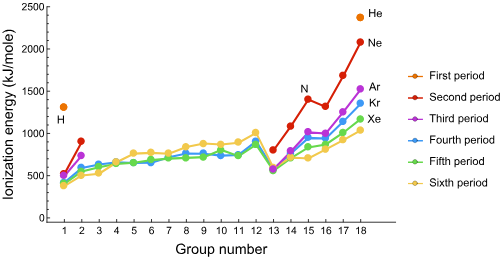 Plot: ionization energies (in kJ/mol) for the first six periods of the periodic table as a function of group number. The qualitative trends are generally followed (IE increases with group number and decreases with period), but there are notable departures, such as the behavior of the sixth period (yellow points) from Group 5 through Group 12.

When you go down a group, atomic radius increases. As electron shells are filled, the outer valence electrons are increasingly shielded from the nucleus by repulsion forces from electrons in lower shells. As such, they are more loosely held to the atom and the radius increases. An electron that is further from the nucleus is easier to expel. In other words, less energy is required to remove an electron from the outer most electron shell, or orbital. Atomic radius and ionization energy are thus inversely related, so first ionization energies increase as group number increases (left to right in the periodic table).

It would be easier to expel electrons from a large Ca (calcium) atom with loosely held electrons than it would be from a small Cl (chlorine) atom whose electrons would be tightly constrained.

Notice, that when the first electron is expelled, the overall charge on the atom becomes positive. As a result, shielding from the core electrons decreases so that the remaining electrons sense a stronger effective field and are more attracted to the new positive ion than they would be in the neutral atom. Successive ionization energies are higher than the preceding energy; each successive electron requires more energy to be released. As each electron is expelled, the positive charge of the ion increases making it more and more difficult to expel electrons.

A counterpoint to ionization energy is electron affinity; the energy given off when a neutral, gas phase atom gains an electron thus forming a negatively charged ion. Take fluorine, for instance. Fluorine’s first electron affinity, the energy released when the first additional electron is acquired, can be represented as such:

Electron affinities are found from heats of formation measurements and ionic compound lattice energies making them difficult to obtain. Hence, only a few are directly known, mostly for halogens. The use of electron affinities is most often confined to those elements in groups 16 and 17, the chalcogens (oxygen family) and the halogens.