An object undergoing uniform circular motion does not accelerate.

To cut through the confusion, let's look at the definition of acceleration: the time rate of change of velocity. Whenever velocity changes, there must be a corresponding acceleration.

Car in uniform circular motion about a cul-de-sac.

The confusion comes from the difference between velocity in 1-dimension and velocity in multiple dimensions. In one dimension, velocity has a magnitude (e.g. 5 m/s) and a direction (e.g. toward the northeast). However, as the direction can only be toward the left or the right, it isn't possible to smoothly vary the direction of velocity—as is the case in circular motion—we can only have discrete shifts. Such motion isn't usually encountered except during collisions, where few would doubt the existence of significant acceleration.

In d>1 dimensions, velocity is a full-fledged vector quantity and its direction can be varied naturally. One such case is uniform circular motion where the direction of velocity varies smoothly as we move about the circle. Despite the constancy of speed, the direction of motion is changing and therefore the time rate of change of velocity is nonzero—which constitutes an acceleration.

In what direction does the object accelerate? As its speed is unchanging, the acceleration must be perpendicular to the direction of motion, and thus toward the center of the circle. Its magnitude can be found in a number of ways, and is given by acent​=v2/R, where R is the radius of the circle. 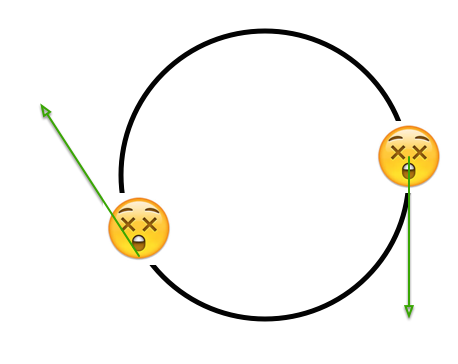 A particle is moving on a circular track with constant non-zero speed. Which of the following options are correct?

(a) The acceleration of the particle is zero.

(d) The angle between velocity and acceleration has to be 90∘.