Uniform circular motion occurs when an object travels along a circular path at a constant speed or angular velocity.

Velocity is defined by speed and direction, so although an object's speed is constant, its direction changes constantly as it moves around a circle. Any change in velocity necessitates a force according to Newton's second law. Thus an object undergoing uniform circular motion experiences a centripetal acceleration, ac​, whose instantaneous direction is toward the center of curvature of the object's path, and whose magnitude can be expressed in terms of the radius, r, and either tangential velocity, v, or angular velocity, ω:

Any object whose motion is periodic may be described in terms of the time it takes to complete one cycle or the period. In uniform circular motion, the constant speed produces a constant period.

To start, consider the definition of translation velocity:

The time Δt will be equal to the period T only when the distance traveled Δx is equal to one circumference of the circular path 2πr:

Solving for the period gives

Substitute v=rω to solve for the second definition.

Since the car travels 90∘, the turn will take 41​ of the period.

What is the approximate angular velocity of the earth about its axis in rad/s?

Swinging a ball on a string

A basic example of uniform circular motion is a mass attached to a string is moving with a constant speed while the other end of the string remains fixed. 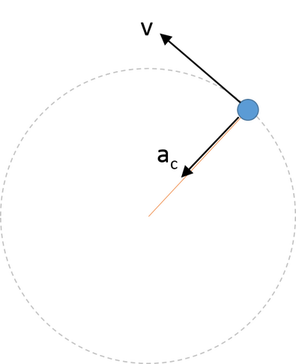 A 0.2kg ball on the end of a 2 m string is swung in a horizontal circle at 3sm​. Ignoring gravity, what is the tension in the string?

we conclude that the only force acting on the ball is the tension T in the string, since we are told to ignore gravity. Therefore,

The tension in the string is 0.9 N. Many problems in Newtonian mechanics provide information about the physical forces on an object and ask you to calculate acceleration. It is worth noting that in this example, we took an opposite approach. When an object is in uniform circular motion, its acceleration often is known or can be easily calculated, as in this example. We then used the acceleration to compute the net force, which we used to deduce information about a physical force, tension. This observation helps to explain why problems involving uniform circular motion can seem "backwards" compared to other problems involving forces and motion in Newtonian mechanics.

A ball of mass 14 g attached to a string of 70 cm length is whirled around in a horizontal circle. If the period of revolution is 2 seconds, calculate the tension in the string in Newtons. Submit your answer to 3 decimal places.

A 5 kg object is tied to the end of a 0.2 m string and swung in a horizontal circle while making an angle of 6π​ below the horizontal. If g=10s2m​, how fast is the object traveling in sm​?

The work done by a centripetal force is always 0 J.

In order to find the work done by a force, consider a differential piece of work, which is the dot product of a constant force with a differential displacement.

The differential displacement is infinitesimally small, and will thus always point in the direction of the tangential velocity. Since the centripetal force is always directed radially inward, θ=90∘ always for an object moving along a perfectly circular path.

The Earth takes 1 year to complete its orbit around the Sun. Treating the orbit as perfectly circular, find the net work done on the Earth by the Sun in 41​ of a year. Give your answer to three significant figures.