The complement of an event is the subset of outcomes in the sample space that are not in the event. A complement is itself an event. 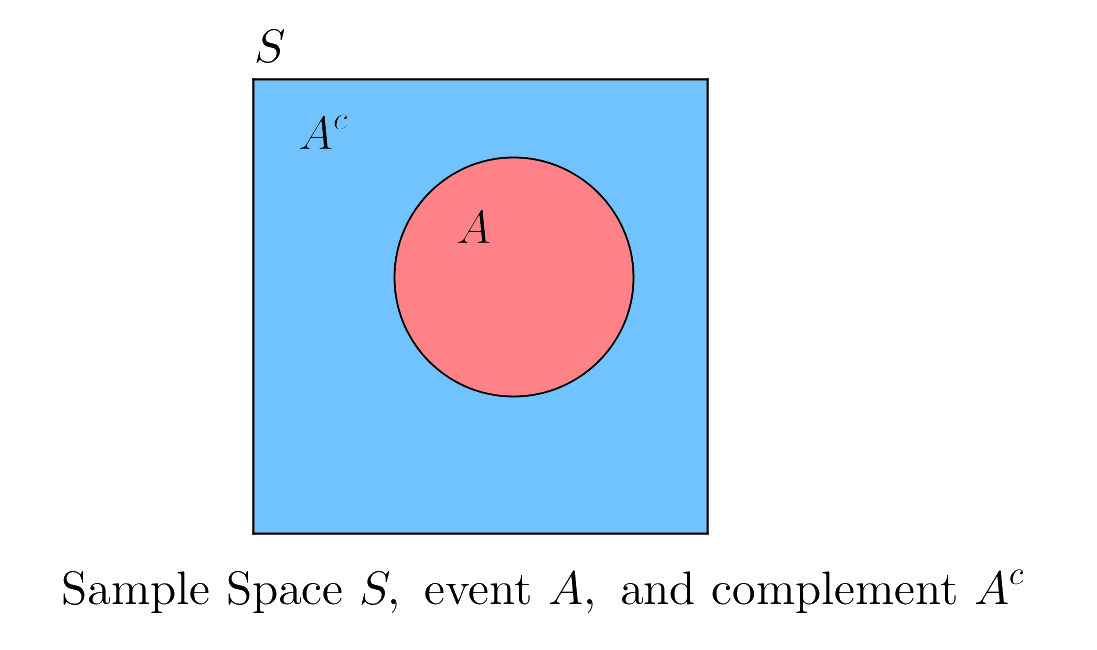 The study of complements is important because their properties allow for the efficient calculation of probabilities.

When exploring probability problems, it is important to be able to describe complements and to recognize when an event can be interpreted as a complement.

Let A and B be events in sample space S.

A and B are exhaustive if A∪B=S.

There is a box with red, blue, and green balls. A ball is drawn at random from the box. Let R be the event that a red ball is drawn. Describe Rc.

Since any ball you select will either be red, blue, or green, if the ball is not red, it will be either blue or green. Rc must be the event that you draw a green or blue ball.

It is perhaps more difficult to recognize when an event can be described as the complement of another event. Reinterpreting events as complements of other events is a useful skill which can aid in calculating probabilities efficiently.

A fair 6-sided die is rolled three times. Let A be the event that at least one of the rolls is a 6. Describe A as the complement of another event.

This problem is asking us to reinterpret A as the complement of another event. We need to think of what would happen if there wasn't at least one 6 among the three rolls.

If there wasn't at least one 6 among the three rolls, then that means that none of the rolls are 6.

Let B be the event that none of the three rolls have a result of 6. Then Bc=A.

This complement relationship between "none" events and "at least one" events is very important, and it shows up frequently in the study of probability.

Consider an experiment with multiple trials. Let x be an outcome of one of those trials.

In a probability experiment, the probability of all possible events (the sample space) must total to 1— that is, some outcome must occur on every trial. For two events to be complements, they must be mutually exclusive and exhaustive, meaning that one or the other must occur. Therefore, the probabilities of an event and its complement must always total to 1.

For any given event A:

Note: this does not, however, mean that any two events whose probabilities total to 1 are each other's complements; complementary events must also fulfil the condition of mutual exclusivity.

Suppose a fair six-sided die is rolled 10 times. What is the probability that a 1 is rolled at least once?

Recall that "at least one" events can often be expressed as the complement of "none" events.

As the 10 die rolls are mutually independent, we can calculate P(A) using the rule of product. Each die roll has a 65​ probability of being a number other than 1. There are 10 rolls, and so

Ac will be the event that a 1 is rolled at least once in 10 rolls.

There is approximately a 0.838494​ probability that there will be at least one roll of 1 among the 10 rolls.