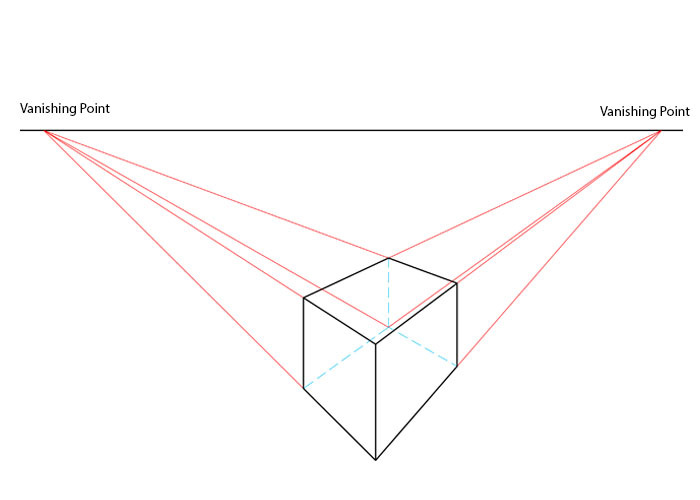 A cube drawn in perspective drawing, which motivated projective geometry

A projective plane is defined by a set of points, a set of lines, and a property of incidence satisfying three properties:

The final condition is not strictly necessary; it exists only to exclude degenerate cases from consideration. This is useful, however, in order to avoid having to manually check several degenerate cases over and over again; therefore, it is generally assumed as a matter of convenience.

The second condition has an important consequence:

There are no parallel lines in the projective plane.

Additionally, the first and second conditions are very similar, differing only in the swapping of "points" and "lines". This forms the motivation behind defining the property of incidence: it shows the duality between points and lines.

The simplest (and most commonly used) example of a projective plane is the extended Euclidean plane, which is the ordinary Euclidean plane equipped with two additional properties:

What is the maximum number of n-element sets such that any two sets share exactly one element, and there is no element that appears in every set?

Each n-element set can be interpreted as the set of lines with which a point is incident.

Since the projective plane is defined in terms of a set of points and a set of lines, equivalent definitions come from interchanging the two. Formally speaking, a duality ρ is a mapping of points to lines and lines to points, with the property that if P is incident to ℓ, then ℓρ is incident to Pρ. The simplest example of this was the first two properties in the definition:

Though there are projective planes that are not self-dual, they are somewhat difficult to construct, and the most natural extensions of the extended Euclidean plane to an arbitrary field are also self-dual.

A polarity of a projective plane is a duality that is an involution, meaning that the duality is its own inverse (or, equivalently, applying the duality twice results in the original plane). An important example stems from the concept of inversion, defined as follows: in the Euclidean plane, fix a circle O with radius r. For every point P, define the image of P to be the point on OP such that OP⋅OQ=r2. The mapping P→Q is an inversion of the plane.

Now define a duality as follows: for every line ℓ in the plane not passing through O, let P be the perpendicular from O to P, and let Q be the image of P under inversion of the plane. Then map ℓ to Q. Duality also requires a mapping of points to lines, so the analogous definition is made: for any point P​=O in the plane, P is mapped to the line through Q (the image of P) that is perpendicular to OP. Since this needs to be extended to the projective plane (the extended Euclidean plane), two more conditions are necessary:

This mapping, from P to the polar of P and from ℓ to the pole* of ℓ, define a polarity (this is relatively easy to verify). There are many properties of this particular polarity, but the most important and most general fact is:

More generally, additional polarities can be defined by extending the definition of inversion to arbitrary conics.

While projective geometry is useful in its own right, it has significant application to Euclidean geometry as well. An earlier section gave a taste of this, in which Ceva's theorem and Menelaus' theorem were shown to be equivalent. Additional results include the following:

This theorem is intuitively understood as a theorem on art; more specifically, on perspective drawing: 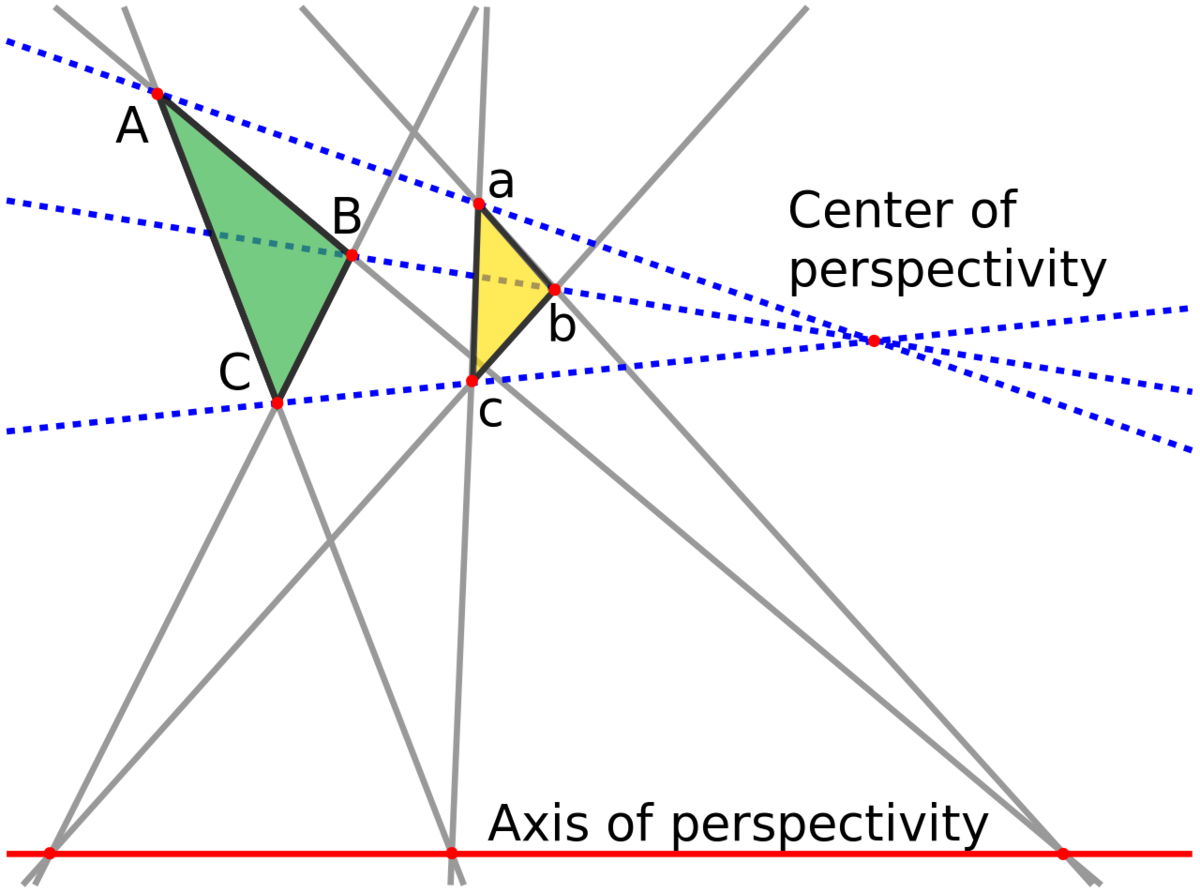 Interestingly, this result is not true in all projective planes, for instance in some finite projective planes of order 9. Nonetheless, it is true in most of them and certainly in the extended Euclidean plane. It is worth noting that the "iff" portion of this theorem is easily concluded from the principle of duality discussed above, so demonstrating either direction is sufficient to prove the theorem.

Another important theorem is as follows:

Let A,B,C,D,E,F be six points on any conic (usually a circle). Then AB∩DE,BC∩EF,CD∩FA are collinear.

Pascal's theorem is often useful even when there are fewer than 6 points on the conic, by considering a degenerate case where some of the points are equal. In this case, a line like BB is understood to be the tangent to the circle at B. It is also worth noting that Pascal's theorem has a converse: if AB∩DE,BC∩EF,CD∩FA are collinear, then A,B,C,D,E,F lie on some conic. This is not necessarily very useful information, but if five points are already known to lie on a conic, then the sixth must as well (as five points determine a conic). Thus the converse of Pascal's theorem can be useful in showing points lie on a certain circle, especially when combined with the degenerate strategy.

The projective dual of this theorem is important as well:

Let ABCDEF be a hexagon circumscribed about a conic section (again, usually a circle). Then AD,BE,CF concur at a point. 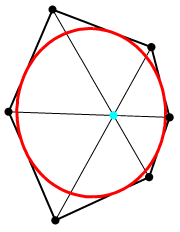 Quadrilateral ABCD is circumscribed about a circle I, that is tangent to AB,BC,CD,DA at E,F,G,H, respectively. Suppose that AC and BD intersect at point P and EG and FH intersect at point Q. If AB=5,BC=6,CD=8,DA=7, what is the distance between P and Q?