Quantum cryptography is the science of exploiting quantum mechanical properties to perform cryptographic tasks. The best known example of quantum cryptography is quantum key distribution which offers an information-theoretically secure solution to the key exchange problem. Currently used popular public-key encryption and signature schemes (e.g., RSA and ElGamal) can be broken by quantum adversaries. The advantage of quantum cryptography lies in the fact that it allows the completion of various cryptographic tasks that are proven or conjectured to be impossible using only classical (i.e. non-quantum) communication. For example, tt is impossible to copy data encoded in a quantum state and the very act of reading data encoded in a quantum state changes the state. This is used to detect eavesdropping in quantum key distribution.

Charles Bennett and Gilles Brassard devised the BB84 protocol to send random private keys between 2 parties as common keys for them to securely encrypt messages that they send to one another. The most important advantage of the BB84 protocol is that any data sent from one party to another would be altered if there were an eavesdropper. This would allow the parties to detect an eavesdropper, and if sufficient data has been eavesdropped, they would avoid using the key obtain and could restart the process. The detection of an eavesdropper involves the utilization of the properties of the way particles behave at the quantum level, mainly the uncertainty principle. 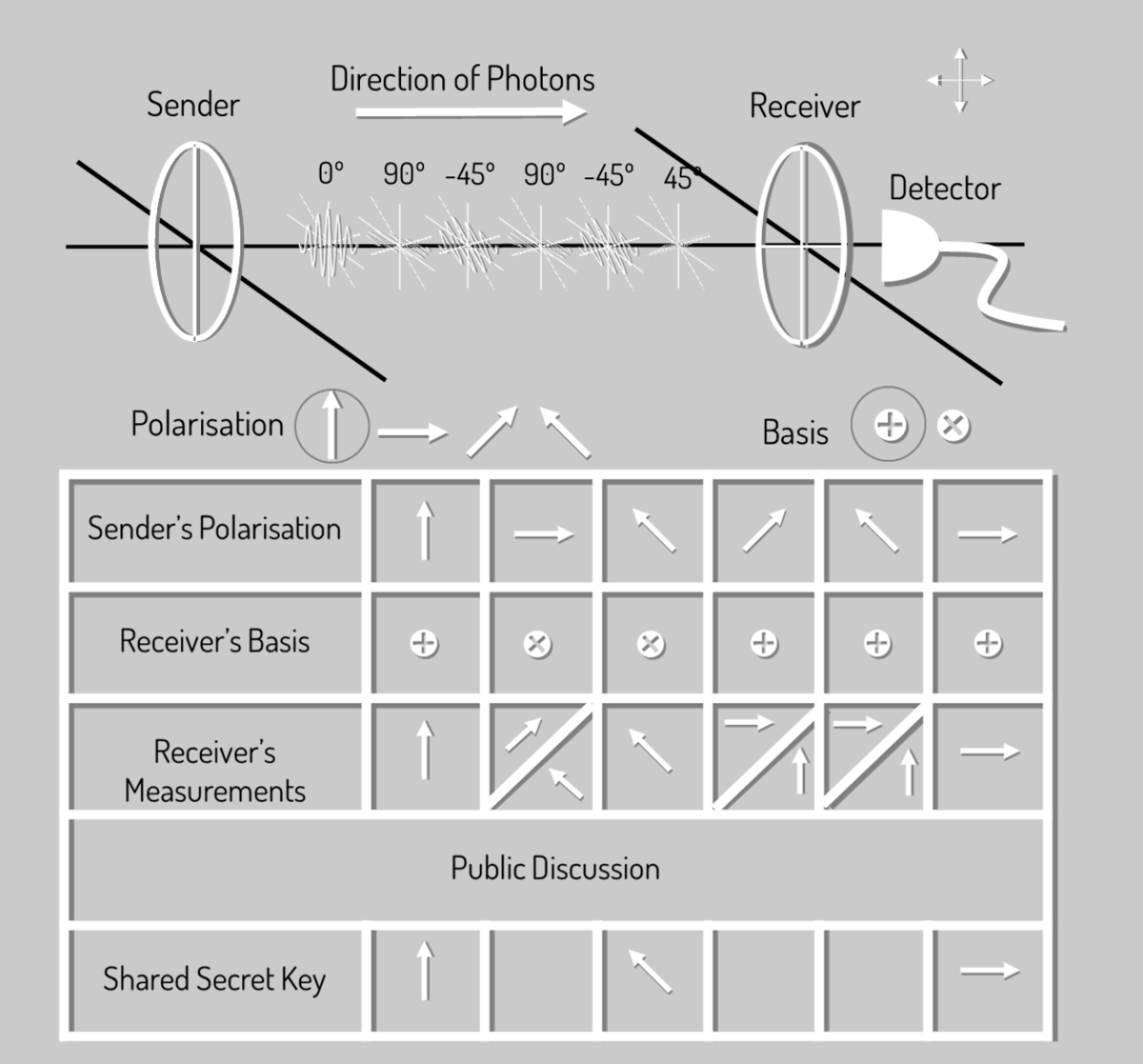 Hence, if there was an interceptor there would be no way of duplicating the photon upon measuring it and the signal that reaches the receiver would be disrupted. This would then be found out when the sender and receiver compare their basis, upon which if the results does not match the polarization of the photon and the basis of the polarizer, it would mean that someone has observed the signal before it was detected. 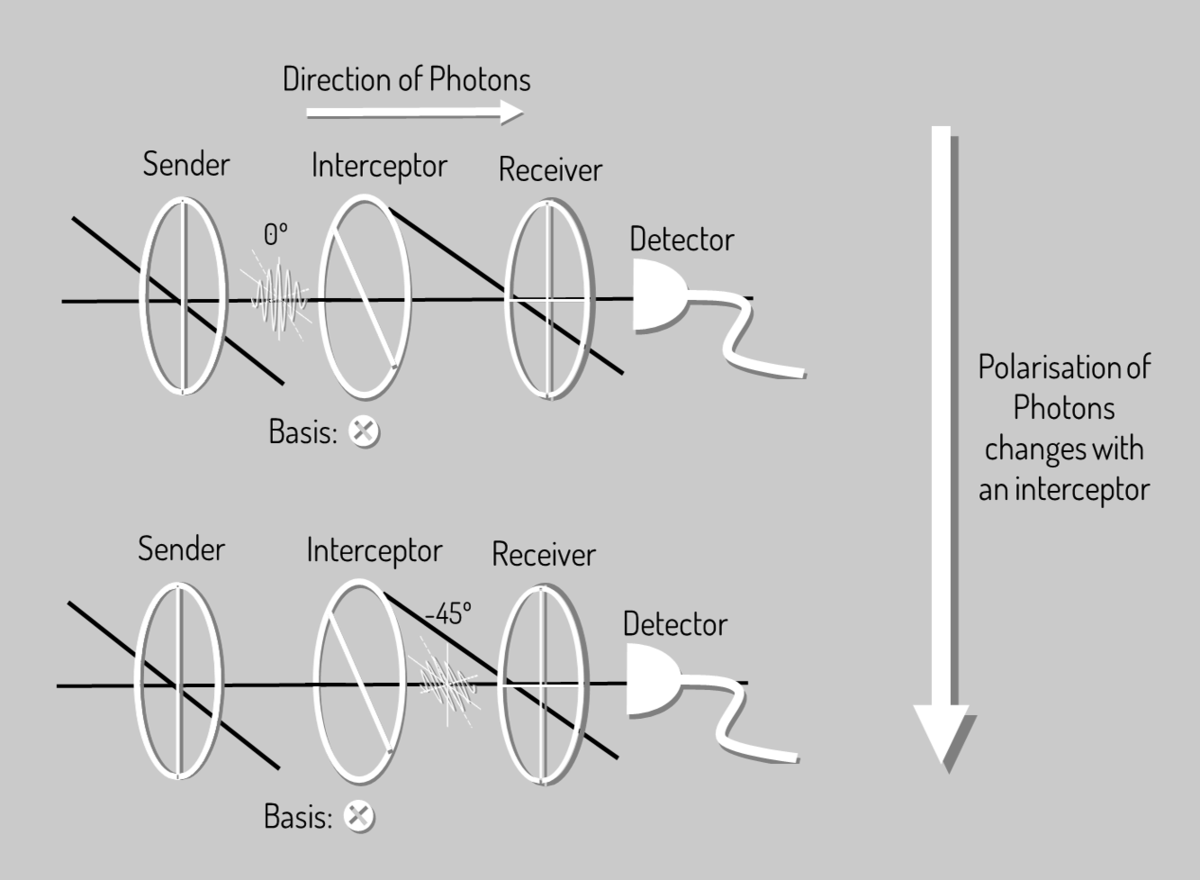 Artur Ekert proposed another method for quantum key distribution, similar to the BB84 protocol, but utilizing quantum entanglement. Unlike the BB84 protocol in which the  information for the key is generated and sent from one party to another with polarized photons, the Ekert protocol uses a central source between the 2 parties to send the polarized photons to them at the same time. 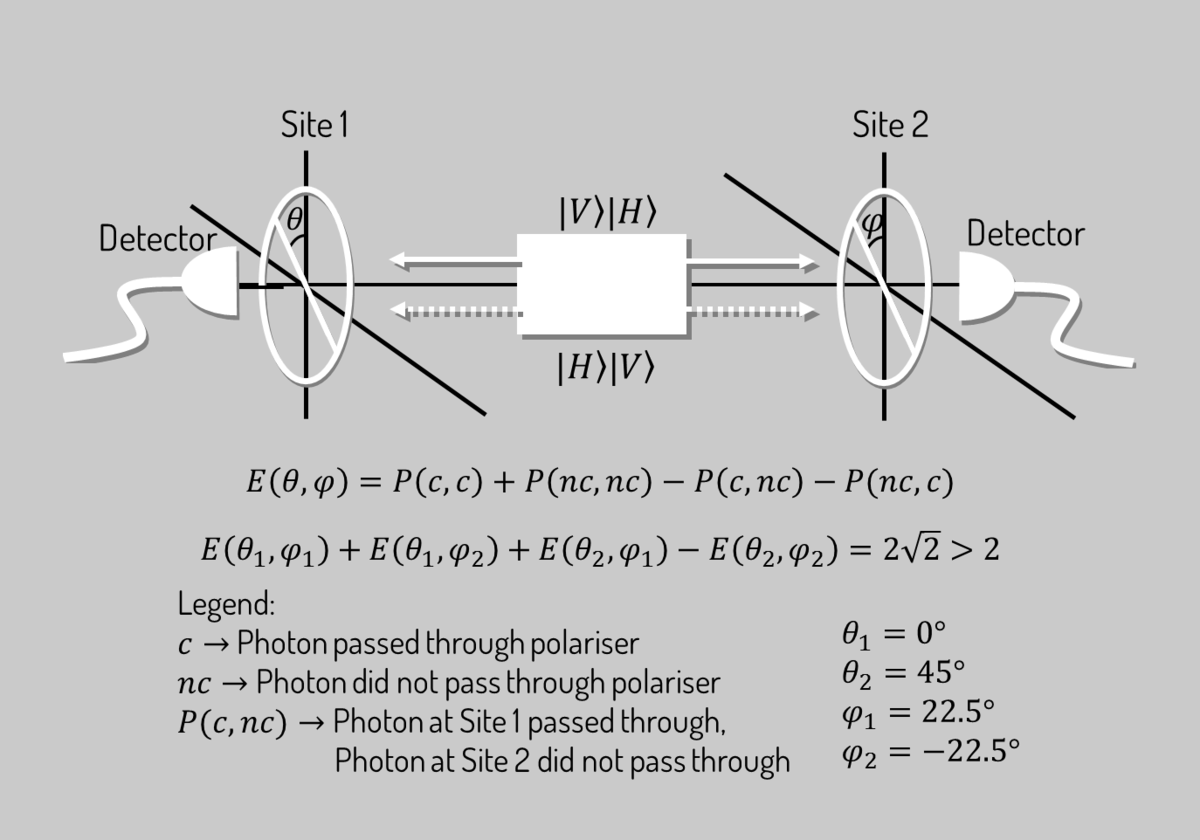 The photons emitted are polarized randomly but are entangled, meaning that if a photon is measured to have a certain polarization, the other photon emitted with it would have a polarization perpendicular to it if both photons are measured in the same basis. The photons are then received by each party after they pass it through a polarizer at their end which has a randomly selected polarization from the set {0, 𝜋/8,𝜋/4} for one party and {0, 𝜋/8,−𝜋/8} for another. This basis is chosen to maximise the entanglement to test for an interceptor later. The basis of each party is kept secret until the end of the transmission. At the end of the process, the 2 parties compare their basis. If both of them chose differing basis for a transmission, the data from it is discarded. To detect an eavesdropper, the 2 parties compute the results of their data, taking into account the polarization of each transmission, to check if it satisfies the Bell’s Inequality. If the results does not violate the Bell’s inequality, it means that an eavesdropper has influenced the data by observing the transmission, causing the photons being observed to be no longer entangled. If no eavesdropper has been detected, the 2 parties now have a set of common key that they share as each party knows the data that the other party have as both of their data are complementary to one another. They can then use this set of common private key to encrypt and decrypt their messages with to communicate secretly. However, this each key can only be used once and not repeated in order to keep the keys completely random