The total energy of the universe is always conserved. The same statement can be stated in other words: the energy can never be created nor be destroyed, but it can only be transferred from one form to another.

There are different types of energies: for example, kinetic energy, heat energy, light energy, sound energy, etc. The sum of all these energies of the universe is always constant. The universe can be broken down into two segments:

1) system: that part of the universe which is under observation
2) surrounding: everything else other than system.

Surroundings may exchange energies with the system, and thus the total energy of a system alone may not always be conserved.

Energies can also be categorized as

For an isolated system, in the absence of non-conservative forces, the mechanical energy of the system remains conserved.

The mechanical energy of a system can be changed by mechanical work. Work is done by force or torque of a force. Force can be categorized into two:

Kinetic energy can be changed by the work of both types of forces, and thus conservative forces must change the potential energy of the system as well, to ensure the mechanical energy remains conserved.

It can be concluded that in the absence of external forces and internal non-conservative forces, the total mechanical energy of the system remains conserved.

A block of mass m is connected by a string, which is wound on a solid cylinder of mass M and radius R. The block is released to fall under gravity. The axle of the cylinder is fixed and smooth. Find the speed of the block as a function of the height descended h by the block. 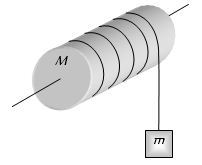 As the points on the circumference of the cylinder are rotating in circular motion, for them it can be written that

Moment of inertia of the cylinder about its axis is 2MR2​, and thus