Synthetic division is a shorthand method to find the quotient and remainder when dividing a polynomial by a monic linear binomial (a polynomial of the form x−k).

This process is equivalent to polynomial division, but it requires much less writing. In addition to this application, synthetic division can be used to evaluate a polynomial function at a certain value.

The top three numbers are the coefficients of the polynomial, that is, 1, -3, and 2 in order. Our "side term" written to the left is based dividing by x−k, so we write negative rather than positive 1. 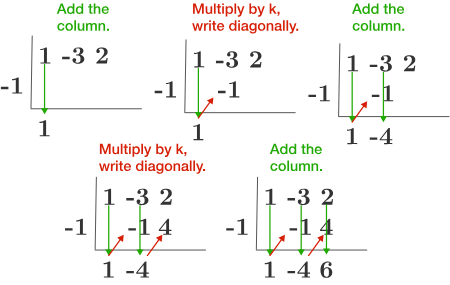 Most of the last line is the coefficients of the quotient (note the quotient has a degree 1 less than the original polynomial), except the last number which is the remainder.

Here's the general procedure; we'll follow this with another example.

If you are curious why the algorithm works, compare the regular long division algorithm with the synthetic. Below the numbers that serve the same function are marked. The synthetic division diagram simply collapses the operations that would normally happen when dividing by (x−k) into a format simpler to write. 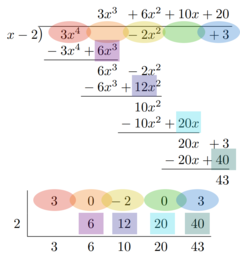 Note that we'd often do long division by multiplying and then subtracting, but because we've already reversed the sign of our divisor (by using (x−k) instead of (x+k)), we've accounted for this; in other words, multiplying the second term by -1 and adding is the same as subtracting. (In fact, it'd be possible to change the synthetic division algorithm to use subtraction and have the side term be (x+k), but the examples above follow the traditional form of the algorithm.)

By applying the remainder factor theorem, we can evaluate polynomial functions with synthetic division.