Equilibrium can further be classified as follows:

An object may be rotating, even rotating at a changing rate, but may be in translational equilibrium if the acceleration of the center of mass of the object is still zero.

In the diagram shown above, the net force acting on the rod is zero and the acceleration of the center of mass also equals zero. About center of mass both forces produce the torque in the same sense that is anticlockwise. Thus, the net torque is non-zero and the body is only in translation equilibrium.

Similarly, an object may be translating with variable speed and still be in rotatory equilibrium. 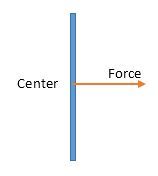 A rod of mass M and length L is hinged at one end and the other end is held by applying a force F. Find the force needed to keep the rod in equilibrium.

Three forces act on the rod:

1) the gravitational force at the center of gravity
2) the hinge force
3) the force F at the end of the rod.

To keep the rod in equilibrium, the net torque should be zero. As a result, writing torque about the hinge, torque of gravitational force and force F are in opposite directions. The torque of hinge force about hinge is zero as it passes through the hinge itself. Therefore, Mg2L​−FLF​=0=2Mg​.​

The above shows a 3 m rod fixed by the rotation axis at the point where the internal division ratio is 1:2. If three forces indicated by the three red arrows--20 N, 40 N, F--are acting and the rod does not rotate, what is the magnitude of F?