A tree is model used to represent hierarchical data. In correspondence to natural trees, it has nodes, leaves and branches. A commonly mentioned tree is a binary tree, in which each node contains leads to two other nodes.

In the above example, each bubble represents a 'node'. The arrows pointing from one bubble to another bubble are called 'edges'. The topmost node ("computer hardware") with no edges leading to it is called the'root'. One or more nodes that immediately follow from a node is called a 'child'. Another important term is depth of a node defined as the length of the path from the root node to that node.

Binary trees are represented in programming languages using linked lists. For example, in C a tree grows from a node:

A tree search starts at the root and explores nodes from there, looking for one particular node that satisfies the conditions mentioned in the problem. Unlike linear data structures, the elements can be traversed in many ways. There are many algorithms that use different order to traverse/pass through a node.

One such method is depth first search.

Depth first search: We start from the root and go as far as possible (deeper) along each branch before backtracking. 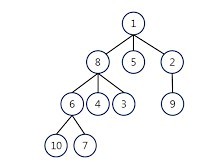