In this article we show a method to solve some problems in geometry.

Let's look at the simple problem: 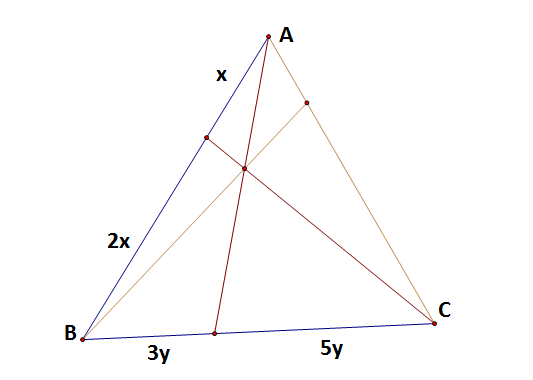 We have a triangle and know some information about it. In the example on the picture we have two edges divided in the ratio 1:2 for the first and ratio 3:5 for the second. We need to figure out ratio for other elements such as cevians (divided by their intersection point) and the other edge.

Lets start with some definitions.

First we define the particle system as a finite set of pairs (A,m) where A is the point (or vector) and m is a scalar.

Generally speaking we can handle any n-dimension space points with any complex m (non-zero), but for our goal we will restrict to real positive m and point under euclidean plane (in some special cases euclidean 3-D space).

An element of a particle system we simply call particle, the first part of the particle we call point, the second we call mass.

The next is the fundamental theorem we are going to use:

There are three conditions the center of mass satisfy:

It's easy to prove all three conditions (good task for those who interested) and let's see what benefits we gain from them.

First let's prove one of the fundamental theorems of triangle geometry: medians in triangle intersect at one point which divides them in the ratio 2:1 from vertex.

In order to prove that we put masses of 1 into all vertices and review the particle system of three elements. If we take any two particles and move them to their center of mass (as per condition 3), then we have the system of two particles: one is middle of the segment (as per condition 2) with the mass 2 and the other is the third vertex with mass 1. Therefore the center of mass for the whole system will be on median dividing it in 2:1 ratio (condition 2). Since the center mass is unique (condition 1) we have the theorem proved. □​

Definition: the segment between the vertex of tetrahedron and centroid of the opposite triangle face called median of tetrahedron. Try to prove that all medians of tetrahedron have common point and figure out ratio of their division by that point.

Generally speaking we can use the method above for any n-dimension simplex.

All we need to do is to set a particle system with points at the triangle vertices and masses defined the way for the intersection of cevians to be the center of mass for the system.

In our example we need to put mass 10 at point A, mass 5 at point B and mass 3 at point C. Let's use third condition of the fundamental theorem and move particles of points A and B to their center of mass.

Now we have two particles with masses 15 and 3. Therefore the cevian CD divided in ratio 5:1.

Using similar method we figure out ratio for other segments:

Notice we figured out ratio for the the third cevian as well as the third edge.

With this method we can easily handle any ratio values for any two segments from those six above. Then we figure out other four ratio values.

We can use the method above for a number of more advanced problems regarding proportions, lengths and areas in triangles including some problems published on brilliant.