Increasingly, science is carried out by large groups of people with highly technical instruments in big, expensive laboratories. There's nothing wrong with that type of science; lots of great discoveries come out of those laboratories. However, there are still plenty of questions that can be asked and answered on a smaller scale. Chemistry and physics are great subjects to explore using tabletop science.

Non-newtonian fluids change viscosity under stress. A Newtonian fluid flows at a constant rate at a given temperature and pressure and always takes the shape of its container. A non-Newtonian fluid that has been hit, shaken, or otherwise undergone sudden stress will change its physical character. Some non-Newtonian fluids become thicker as stress is applied. This is the principle behind whipped cream, and also explains why stirring gravy makes it thicker. Other fluids become less viscous under stress, explaining why shaking or hitting a glass ketchup bottle gets the sauce moving.

A simple non-Newtonian fluid can be made by mixing roughly two parts dry cornstarch with one part water. Add the water slowly, mixing until the cornstarch seems liquid. Then, apply different types of stress to the fluid and see how it reacts.

A non-Newtonian fluid "dancing" on a subwoofer

When the hard outer shell is removed from a raw bird's egg, the egg is similar to a giant human cell, containing a nucleus, cytoplasm, and a semi-permeable membrane capable of osmosis. The egg can then be used as a model to study the gradient of the osmotic pressure, which is also called the tonicity.

Red blood cells can shrivel or burst if their environment changes tonicity. Image from Wikimedia user Zephyris Putting the egg in a hypotonic solution (the concentration of ions is lower in the solution than inside the egg) will cause the egg to absorb water. Similarly, in a hypertonic solution the egg will expel water. The osmotic pressure works to equalize the ion concentration across the egg's membrane. Human cells can undergo the same process. In a hospital, drugs delivered intravenously (directly into the veins) should be close to isotonic with the blood. Otherwise, the blood cells respond to the change in tonicity, which can cause a great deal of pain.

Place a raw egg in a cup or bowl, and cover it with vinegar (~5% acetic acid solution). Within 24 hours, the calcium carbonate shell of the egg will dissolve, leaving a "naked egg" that can be placed in various solutions to test their tonicity.

If you have ever drunk a sugary juice or soda and felt thirsty again an hour later, this experiment helps explain why. Further instructions and photos of some "naked eggs" can be found at the Imagination Station, a science museum in Toledo, Ohio. [1]

Red cabbage can be used as a pH indicator to classify household materials as acids or bases. The plant gets its vibrant color from a group of organic molecules called anthocyanins that can gain or lose hydroxide OHX− ions depending on their surroundings. When extracts from the cabbage are added to a solution, the anthocyanins react with the hydrogen or hydroxide available. The structure of the anthocyanin changes as hydroxides are gained or lost, which determines the color of the solution. 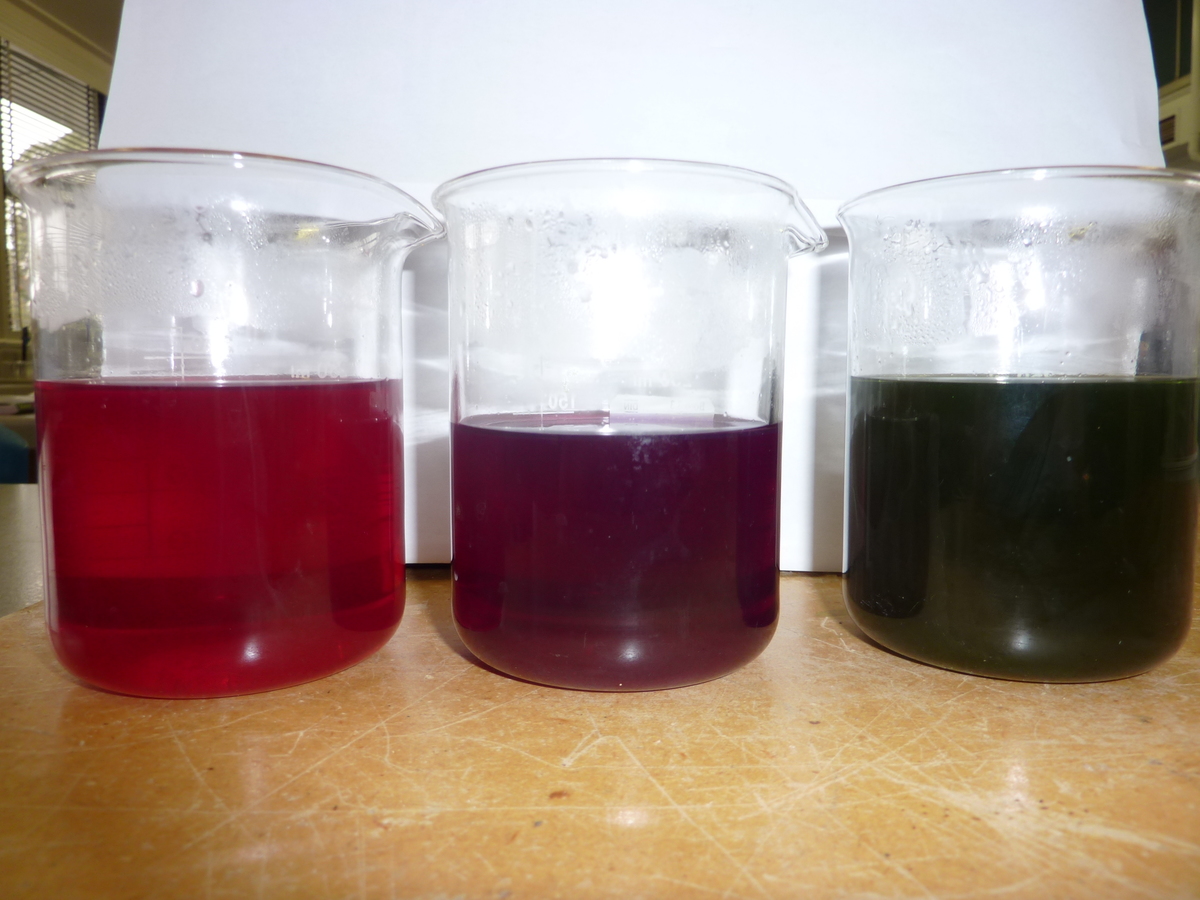 Chop up 3-4 cabbage leaves and place them in a blender, covered with water. Blend them into a liquid, and then strain or filter remaining pieces of the leaves. The indicator is now ready to be added to the solutions of interest.

Stanford University has a downloadable worksheet[2] with step-by-step instructions and ideas of household items to test.

Paper made of turmeric powder and the extract of hibiscus can also be used as pH indicator to classify household materials as acids or bases.

While homemade science projects may seem inferior to or less exciting than the types of experiments conducted with high-powered microscopes, telescopes, or particle colliders, learning to generate quality data and evaluate it appropriately can make any laboratory setup a success, even if it's a home kitchen.

One researcher that is well-known for using low-tech methods in a field dominated by expensive instruments is the neuroscientist V.S. Ramachandran. For example, he studied patients with phantom limb pain and hypothesized that parts of the brain that used to control the limb were now responding to nerve stimuli from the face, which was contributing to the phantom limb pain. He mapped his patients' brains by touching their face with a Q-tip and asking them questions about their phantom limbs, and used MRI only to verify the results of his Q-tip experiments. He was then able to teach many patients how to ease their phantom limb pain by practicing simple exercises in front of a mirror.

Ramachandran has "a reputation among his peers for being able to solve some of the most mystifying riddles of neuroscience." [3]