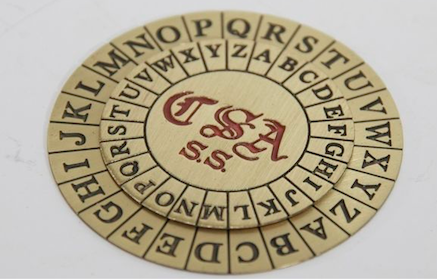 A 16th-century French diplomat, Blaise de Vigenère, created a very simple cipher that is moderately difficult for any unintended parties to decipher. There are too many possible keys to brute-force, even if the key is known to come from a particular language. It cannot be broken with the word pattern attack that worked on the simple substitution cipher. It is thought to have remained unbroken until Charles Babbage, considered to be the father of computers, broke it in the 19th century.

Vigenère ciphertext is a combination of a Caesar shift combined with a keyword. The length of the keyword determines the number of different encryptions that are applied to the plaintext. For example, if the keyword is 4 characters in length, then the plaintext is divided into 4 subtexts and a separate Caesar shift is applied to each subtext depending on the value of the corresponding letter in the keyword. The cipher is polyalphabetic, which means that a character can be enciphered in different ways—for example, an "A" in one subtext could be encoded as a "T", and in another subtext it could be encoded as a "P". This interferes with frequency analysis, a method of breaking codes by looking at the most common characters and mapping them to the most common characters in the (non-encrypted) language. 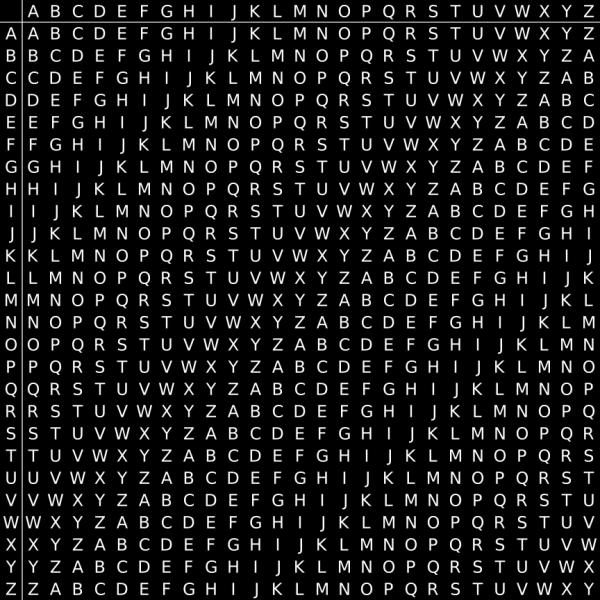 Vigenère substitution is based on the above table. The Vigenère cipher uses this table together with a keyword to encrypt a message.

All 26 possible Caesar ciphers are represented in the table (one per row), since each row displays the alphabet shifted by one more letter than the above row. The key letter is shown at the beginning of each row. The rest of the row shows the letters A to Z (in shifted order). Although there are 26 key rows shown, the encoder will only use as many rows (different alphabets) as there are unique letters in the key string.

Suppose we wish to encrypt the plaintext message THE SUN AND THE MAN IN THE MOON ,
using the keyword KING.

Here is an online Vigenère cipher that you can use to generate your own coded messages and check your answers.

The strength of the Vigenère cipher is that it is not susceptible to frequency analysis due to the fact that the cipher rotates through different shifts, so the same plaintext letter will not always be encrypted to the same ciphertext letter. For example, let’s say that “e” is the most common letter in English words. A codebreaker using frequency analysis may think that the most common letter in an encoded message likely corresponds to “e”. However, since a Vigenère cipher encodes the same letter in different ways, depending on the keyword, “e” could be encoded as many different letters, thus breaking the assumptions behind frequency analysis. As such, they were regarded by many as unbreakable for 300 years.

The primary weakness of the Vigenère cipher is the repeating nature of its key. If a cryptanalyst correctly guesses the length of the key, then the ciphertext can be treated as interwoven Caesar ciphers, which, individually, can be easily broken. For example, in the cryptogram above, the plaintext THE occurs twice in the message, and in both cases, it lines up perfectly with the first two letters of the keyword. Because of this, it produces the same ciphertext BUK.

In fact, any message encrypted with a Vigènere cipher will produce many such repeated instances. Although not every repeated instance will be the result of the encryption of the same plaintext, many will be and this provides the basis for breaking the cipher. This method of analysis is called Kasiski examination.

Which of the following keys would yield approximately 300 million encoding combinations for a given message using a Vigenère cipher?

Here is one way to implement a Vigenère cipher in Python.[2]