Abstract algebra is a broad field of mathematics, concerned with algebraic structures such as groups, rings, vector spaces, and algebras.

Roughly speaking, abstract algebra is the study of what happens when certain properties of number systems are abstracted out; for instance, altering the definitions of the basic arithmetic operations result in a structure known as a ring, so long as the operations are consistent.

For example, the 12-hour clock is an example of such an object, where the arithmetic operations are redefined to use modular arithmetic (with modulus 12). An even further level of abstraction--where only one operation is considered--allows the clock to be understood as a group. In either case, the abstraction is useful because many properties can be understood without needing to consider the specific structure at hand, which is especially important when considering the relationship(s) between structures; the concept of a group isomorphism is an example. 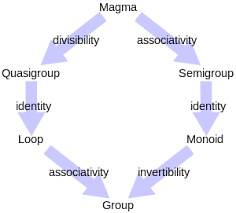 It is possible to abstract away practically all of the properties found in the "usual" number systems, the tradeoff being that the resulting object--known as a magma (which consists of a set and a binary operation, that need not satisfy any properties other than closure)--is simply too general to be interesting. On the other extreme, it is possible to abstract out practically no properties, which allows for many results to be found, but the resulting object (the usual number systems) is too specific to solve more general problems.

Most of abstract algebra is dedicated to objects that have a reasonable balance between generality and structure, most notably groups and rings (discussed in more detail below) in which most of the basic properties of arithmetic are maintained, but their specifics are left free. Still, some higher levels of abstraction are occasionally useful; quasigroups, for instance, are related to Latin squares, and monoids are often used in computer science and are simple examples of categories. 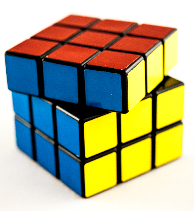 The possible moves on a Rubik's cube form a (very large) group. Group theory is useful as an abstract notion of symmetry, which makes it applicable to a wide range of areas: the relationship between the roots of a polynomial (as in Galois theory) and the solution methods to the Rubik's cube are both prominent examples.

Informally, a group is a set equipped with a binary operation ∘, so that operating on any two elements of the group also produces an element of the group. For example, the integers form a group under addition, and the nonzero real numbers form a group under multiplication. The ∘ operation needs to satisfy a number of properties analogous to the ones it satisfies for these "normal" number systems: it should be associative (which essentially means that the order of operations doesn't matter), and there should be an identity element (0 in the first example above, and 1 in the second). More formally, a group is a set equipped with an operation ⋅ such that the following axioms hold; note that ⋅ does not necessarily refer to multiplication; rather, it should be viewed as a function on two variables (indeed, ⋅ can even refer to addition):

It is also worth noting the closure axiom for emphasis, as it is important to verify closure when working with subgroups (groups contained entirely within another):

Additional examples of groups include

S3​ is worth special note as an example of a group that is not commutative, meaning that a⋅b=b⋅a does not generally hold. Formally speaking, S3​ is nonabelian (an abelian group is one in which the operation is commutative). When the operation is not clear from context, groups are written in the form (set,op); e.g. the nonzero reals equipped with multiplication can be written as (R∗,⋅).

Rings are one of the lowest level of abstraction, essentially obtained by overwriting the addition and multiplication functions simultaneously (compared to groups, which uses only one operation). Thus a ring is--in some sense--a combination of multiple groups, as a ring can be viewed as a group over either one of its operations. This means that the analysis of groups is also applicable to rings, but rings have additional properties to work with (the tradeoff being that rings are less general and require more conditions).

The definition of a ring is similar to that of a group, with the extra condition that the distributive law holds as well:

A ring is a set R together with two operations + and ⋅ satisfying the following properties (ring axioms):

A ring is usually denoted by (R,+,.) and often it is written only as R when the operations are understood.

As in groups, a ring homomorphism can be defined as a mapping preserving the structure of both operations.

Rings are used extensively in algebraic number theory, where "integers" are reimagined as slightly different objects (for example, Gaussian integers), and the effect on concepts such as prime factorization is analyzed. Of particular interest is the fundamental theorem of arithmetic, which involves the concept of unique factorization; in other rings, this may not hold, such as

Abstract algebra also has heavy application in physics and computer science through the analysis of vector spaces. For example, the Fourier transform and differential geometry both have vector spaces as their underlying structures; in fact, the Poincare conjecture is (roughly speaking) a statement about whether the fundamental group of a manifold determines if the manifold is a sphere.

Related to vector spaces are modules, which are essentially identical to vector spaces but defined over a ring rather than over a field (and are thus more general). Modules are heavily related to representation theory, which views the elements of a group as linear transformations of a vector space; this is desirable to make an abstract object (a group) somewhat more concrete, in the sense that the group is better understood by translating it into a well-understood object in linear algebra (as matrices can be viewed as linear transformations, and vice versa).