Fermat's last theorem (also known as Fermat's conjecture, or Wiles' theorem) states that no three positive integers x,y,z satisfy xn+yn=zn for any integer n>2. Although a special case for n=4 was proven by Fermat himself using infinite descent, and Fermat famously wrote in the margin of one of his books in 1637 that he had found a proof for all n, the theorem was not proved until 1995. The proof, due to Andrew Wiles, was a culmination of centuries of work by dozens of mathematicians. The theorem that Wiles et. al. actually proved was far deeper and more mathematically interesting than its famous corollary, Fermat's last theorem, which demonstrates that in many cases the value of a mathematical problem is best measured by the depth and breadth of the tools that are developed to solve it.

In particular, 19th century attempts to solve Fermat's last theorem were ultimately unsuccessful, but were instrumental in the creation of the field of algebraic number theory. Many mathematicians believe that Fermat's "proof," if it existed, was likely similar to the erroneous proofs produced in the 19th century, which implicitly and incorrectly assumed a kind of unique factorization in certain rings. Attempts to fix these arguments led to the theory of ideals and many other advances in algebraic number theory. See the Algebraic Number Theory wiki for more details.

Is the following equation true?


Hint: How is this related to Fermat's last theorem?

The equation xn+yn=zn has no nontrivial positive integer solutions for n≥3. (A solution is trivial if xyz=0.) 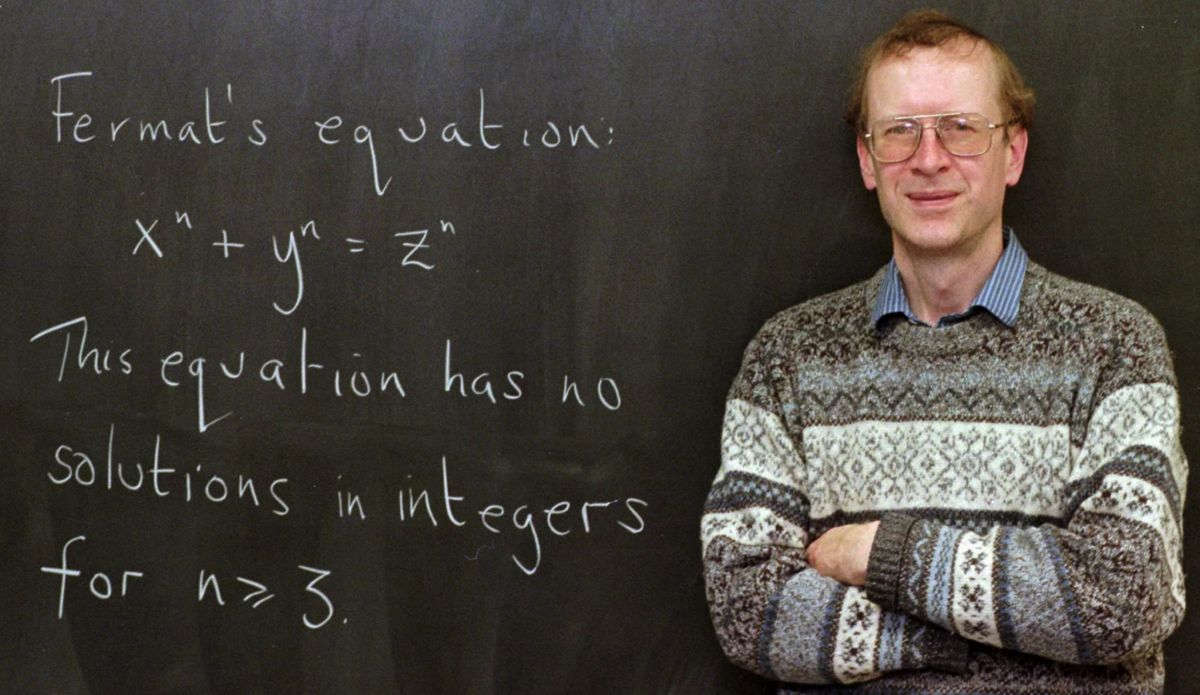 Andrew Wiles, pictured above, was recently awarded the 2016 Abel Prize for his 1994 proof of Fermat's last theorem.

Suppose n=2016 and ∣x∣,∣y∣,∣z∣ are all less than 10. How many solutions in integers are there to the equation on the chalkboard?

Note: A solution here refers to an ordered triple (x,y,z).

In the early 19th century, Sophie Germain developed a plan to attack Fermat's last theorem. Her general idea was to show that certain types of primes divided xyz, and then to show that there were infinitely many such primes, which would supply a contradiction. She split the solutions to xp+yp=zp into two cases: the first case where p∤xyz and the second case where p∣xyz. Her plan was unsuccessful, but she did prove several interesting results, including that the first case of Fermat's last theorem (that there were no solutions with p∤xyz) held for all odd primes p≤100, and also that the first case held if p was a Sophie Germain prime, a prime p such that 2p+1 is also prime. (Such primes have recently become important in public-key cryptography.)

In the mid 19th century, mathematicians began to explore proof ideas involving factoring the left side xp+yp in the ring Z[ζp​], where ζp​ is a primitive pth root of unity. This led to a deep study of such rings (and their fields of fractions Q(ζp​), called cyclotomic fields), which was the genesis of modern algebraic number theory. Ernst Kummer, one of the pioneers of this field, identified a class of primes which were amenable to these techniques, which he called regular primes. He was able to prove Fermat's last theorem for regular prime exponent, but could do nothing substantive with irregular primes. It was later proved that there are infinitely many irregular primes (heuristically, the probability of a prime being irregular is roughly 39%), so this approach was doomed to have only limited success. See the Algebraic Number Theory wiki for more details.

Wiles' proof of the theorem was the last link in a long chain of reasoning. First, in 1955, the Japanese mathematicians Goro Shimura and Yutaka Taniyama conjectured a link between elliptic curves, which were (and still are) very intensely studied objects from algebraic geometry, and modular forms, which are a class of functions from complex analysis that come equipped with a large set of symmetries. The statement of the conjecture was this: Every elliptic curve is modular. This conjecture was considered quite deep and completely inaccessible when it was made, although experts in the field came to believe that it was true in subsequent decades.

In 1984, the German mathematician Gerhard Frey noticed that a solution to the equation in Fermat's last theorem could be used to construct an elliptic curve that was unlikely to be modular, and gave some evidence that it would not be modular. Two years later, Ken Ribet proved that Frey's curve was in fact not modular. So the Taniyama-Shimura conjecture implied Fermat's last theorem, since it would show that Frey's non-modular elliptic curve could not exist.

Upon hearing the news of Ribet's proof, Wiles, who was a professor at Princeton, embarked on an unprecedentedly secret and solitary research program in an attempt to prove a special case of the Taniyama-Shimura conjecture: that every semistable elliptic curve was modular. (Frey's curve, if it existed, would be semistable.)

His work drew on a vast array of deep and difficult modern mathematics, drawing on the theory of elliptic curves and their associated L-functions (a type of Dirichlet series), modular forms (a difficult branch of complex analysis), and a third area which linked the two, the theory of Galois representations. These are maps from an infinite group called the absolute Galois group of Q to a group of 2×2 matrices with coefficients in ℓnZZ​ for primes ℓ and positive integers n. Elliptic curves and modular forms can be used to give rise to Galois representations, and Wiles' proof eventually came down to an inductive argument that these representations were the same, for an appropriate choice of objects on both sides.

None of the structures described in the above paragraph were new to experts or were invented by Wiles; these potential correspondences were well-known at the time of the proof. Wiles' insights were in the details of his arguments and the techniques he used and invented in order to establish these correspondences. He announced his proof in 1993 after checking his work with his colleagues at Princeton, but a serious error in one of the steps became evident after he published his original paper. Despite the error, the rest of his results were quite novel and important, although they could not be put together to supply a proof of the theorem without fixing the error. Working with a former student, Richard Taylor, he was eventually able to find a way around the problem in his original proof, and he published a fully correct proof in 1995.

Later, building on Wiles' ideas, other mathematicians completed the proof of the full Taniyama-Shimura conjecture (now known as the modularity theorem).

Here are some applications of Fermat's last theorem. Again, these are not terribly diverse or interesting on their own; the theorem is more of a mathematical destination than a gateway.

Differentiating the function repeatedly, we get

By Fermat's last theorem, this expression is not equal to 0. □​

What is the number of distinct positive integers n such that n+32 and n2+33 are both perfect cubes?

Find the number of positive integers n such that there exists an integer m​=2n​ such that 6mn3−2m3​ is a perfect square.

Let n be a positive integer which makes the above product a triangular number.

How many solutions are there for n?

Define a primitive inverse-cubed triplet as any ordered triplet (x,y,z), where x,y,z∈Z+ and gcd(x,y,z)=1, such that

How many ordered triplets (x,y,z) exist that are primitive inverse-cubed triplets?