When the graph is simple, the entries of the adjacency matrix are all 0 or 1 (there are no weights on the edges, or multiple edges) and the diagonal entries are all 0 (there are no loops). More complicated types of graphs give rise to more kinds of matrices.

Create an adjacency matrix for the following weighted, undirected graph: 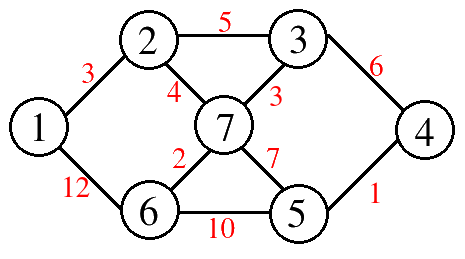 This example suggests some follow-up questions, which will be addressed in a later section:

Let G be a simple graph with n vertices and m edges: that is, G is undirected, unweighted, and has no loops (edges from a vertex to itself).

Notation: if B is a matrix, BT denotes its transpose.

Let A be the adjacency matrix of a simple graph with 6 vertices. Suppose the entry of A2 in the 3rd row and the 4th column is 5. What does this mean about the graph?

So the i,j entries of A2 count two-step walks from i to j. This generalizes as follows:

Let A be the adjacency matrix of a graph. The i,j entry of An counts n-step walks from vertex i to vertex j.

(The proof is a straightforward induction on n, where the argument is essentially the same as the one given above for A2.)

An undirected graph is k-regular if the degree of each vertex is k. What can be said about the eigenvalues and eigenvectors of the adjacency matrix of a k-regular graph?

Let A be the adjacency matrix of a k-regular graph. Let v be the all-ones column vector in Rn. Then the ith entry of Av equals the sum of the entries in the ith row of A. This is the number of edges emanating from vertex i, which is exactly k. So A⎝⎜⎜⎜⎛​11⋮1​⎠⎟⎟⎟⎞​=⎝⎜⎜⎜⎛​kk⋮k​⎠⎟⎟⎟⎞​=k⎝⎜⎜⎜⎛​11⋮1​⎠⎟⎟⎟⎞​, i.e. v is an eigenvector of A with eigenvalue k. □​

Let G and H be graphs on n vertices with adjacency matrices A and B. Then G and H are isomorphic if and only if there is a permutation matrix P such that B=PAP−1.

Recall that a permutation matrix is a square matrix whose entries are all 0 or 1, such that each row and each column contains exactly one 1.