Drugs are a way of modifying the chemistry of the body. They can be used to treat diseases and infections, correct imbalances in electrolytes and fluids, or alter mental status (such as inducing amnesia or stopping hallucinations). Drugs are used both for medical purposes and for recreation. In both cases, no drug is perfect. A perfect drug would be 100% effective while causing no side effects. Drugs offer many benefits, but there are always trade-offs and risks to consider.

Early medicine depended on observation and inferring causal relationships. If someone got sick and eating a particular root made them healthy again, she might eat the same root again the next time she was ill. As a result, traditional medicines from any culture are a mix of compounds that are proven effective and used in modern drugs, utter nonsense that only works because of the placebo effect, and everything in between. Sometimes, the mechanism for a drug remains unknown, even after that drug has been approved, marketed, and prescribed to millions of people.

Modern drug development often starts with a deep understanding of pathophysiology. Many diseases are understood at the organ level, or even at the cellular level. Knowing how the disease affects the body lets researchers postulate mechanisms for stopping or reversing the disease process. It gives researchers specific types of cells, receptors, or processes to target.

Most drugs are originally derived from a natural source, such as a plant or fungus. Aspirin's precursor can be extracted from the bark of a willow tree, for example, while the poppy species Papaver somniferum is the source of both pain medications like morphine and illegal substances like heroin. 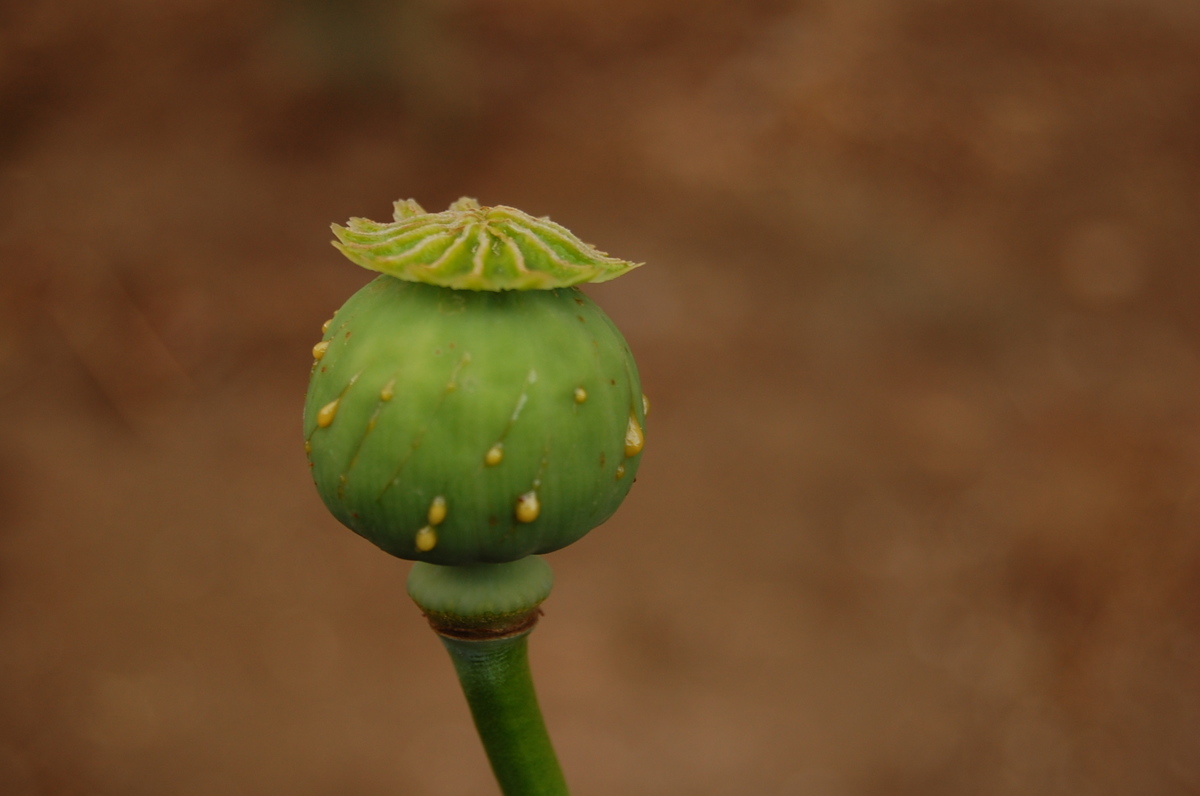 The latex from the seed pod of Papaver somniferum contains morphine (used to treat pain), papaverine (an antispasmodic), codeine (a cough suppressant), and other opiate derivatives.[1]

Many drug products are still derived from ancient medicinal compounds or from newly discovered plants, animals, or fungi. Ethnopharmacology is often the first step in drug development. Researchers travel into a remote area, such as a jungle or rainforest, and study the medicinal remedies used by the native people in the region. They take new species of plants or animals back to their laboratories so they can determine what chemical compounds are giving the desired effects, isolate those compounds, and try to synthesize them in larger yields. The chemical structure may be altered to increase the efficacy of the drug while decreasing undesirable effects.

Ethnopharmacology illustrates the importance of preserving diverse ecosystems from a medical or economic perspective, in that the secrets to curing devastating diseases may be hidden in the flora and fauna. However, tying ecological preservation to human gain can create tension once a natural product of interest is discovered, if there appears to be a tradeoff between protecting the species in question and performing research to improve human lives.

Paclitaxel is a chemotherapy agent that was discovered in the 1970's and named after its source, the bark of the Pacific yew, or Taxus brevifolia, a tree indigenous to the northwestern United States. Paclitaxel and similar agents, called taxanes, play a central role in treating many common types of cancer, including ovarian, breast, lung, prostate, bladder, head, and neck cancers.

The Pacific yews are slow-growing trees, and they are also home to an endangered species of spotted owl. Given the complexity of paclitaxel's structure, early attempts to synthesize the compound in a lab setting failed. It looked like society would have to choose between the cancer therapy and the forest.

In 1993, a research team studying taxanes discovered that it was not the bark of the yew that produced paclitaxel, but a fungus growing on the bark, and they discovered a way to culture the fungus without the bark.[2] Returning to study the bark, rather than working with the decades-old assumption that the bark produced paclitaxel, allowed cancer research to continue without threatening an endangered species. 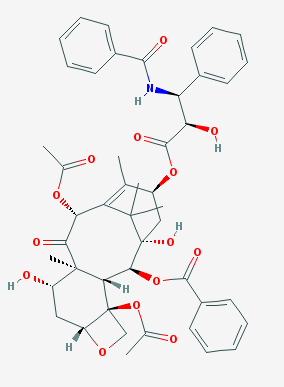 Pharmacodynamics is the study of the effects a drug has on the human body. For example, morphine reduces pain. Many drugs function at a cellular level, binding to receptors on the membrane to modify the cell’s activity.

The opioid receptors of neurons responding to an agonist [4]

An agonist binds to the same site as the natural ligand that would bind to the receptor and produces the same effect. Many pain medications are opioid agonists: they bind to the same opioid receptors that natural endorphins do, producing analgesia and a sense of wellbeing.

Partial agonists produce the same effect, but to a lesser degree than a full agonist. Buprenorphine is a partial opioid agonist. It can be used to treat pain, the same way a full agonist would. It can also be used to treat opioid addictions. Buprenorphine gives an addicted individual relief from the physical symptoms of drug withdrawl but does not produce the same level of euphoria as heroin, for example.

An antagonist binds to the same site on the receptor as the natural enzyme, but it does not produce the same effect. Naloxone is an opioid antagonist that binds to opioid receptors more strongly than the agonists do. It is used to reverse the effects of an opioid overdose, including the slowed breathing that can lead to death.

Both agonists and antagonists can be reversible (impermanent) or irreversible (permanent) in how they bind to the target receptor. 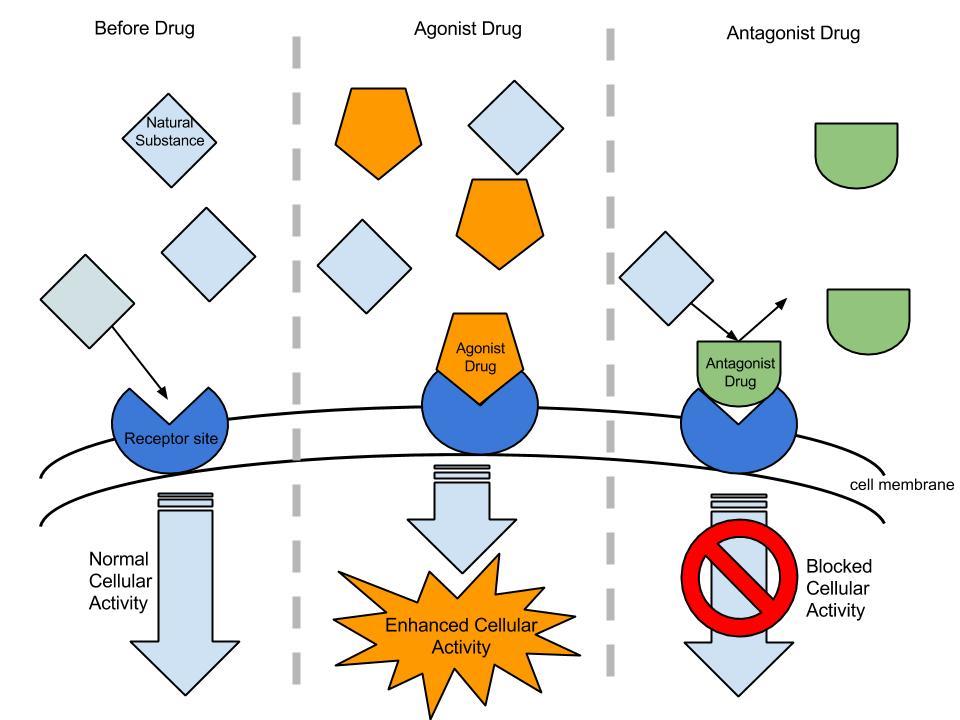 Tetrahydrocannabinol (THC) is the psychoactive agent in marijuana and is a partial agonist for the cannabinoid receptors. Spice is an umbrella term for synthetic compounds that work on the same receptors. Marijuana users who switch to spice experience more intense hallucinations, often becoming more dissociated and paranoid than they would with the same amount of marijuana. What is spice when it acts on the cannabinoid receptors?

Pharmacokinetics is the study of the effects the human body has on a drug. There are four basic pharmacokinetic processes: absorption, distribution, metabolism, and excretion.

The exact same tablet of a pain medication can affect the body differently depending on how it is administered. The tablet will decrease pain and cause no euphoria if it is taken by mouth, as prescribed. However, the tablet can be abused to alter the absorption. If it is insufflated instead, the effects have less to do with pain and more to do with an altered mental status, because the drug is available more immediately.

Absorption determines the bioavailability of the drug, the percentage that reaches the bloodstream in its active form and is therefore accessible to other tissues.

In which of the following scenarios is absorption not an issue?

Distribution describes how a drug moves from the bloodstream to various body tissues. Drugs concentrate in different tissues (fat, muscles, blood, organs, bone, etc.) depending on several factors, the most common being

Changing the functional groups on a drug can make it distribute better into a particular tissue. For example, heroin is diacetylated morphine. The acetyl groups help the drug move faster across the brain’s defense system, the blood-brain barrier. People feel more euphoria from heroin than they do from the same amount of morphine because heroin distributes to the brain better. 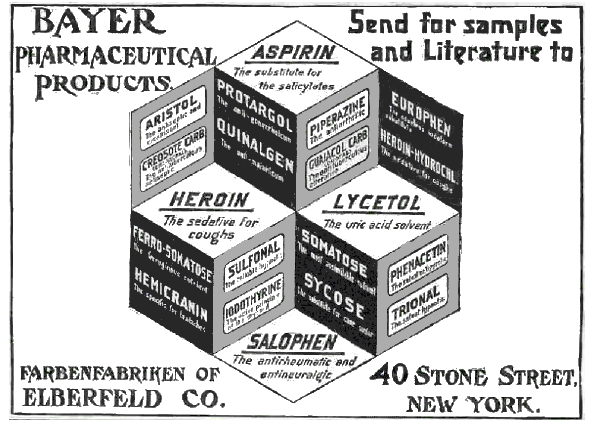 An early advertisement for Bayer products. This media file is in the public domain in the United States. This applies to U.S. works where the copyright has expired, often because its first publication occurred prior to January 1, 1923.

Bayer, the same drug company that makes aspirin (acetylsalicylic acid), launched heroin as a commercial product in 1898. Acetylation had decreased the side effects of salicylic acid, including nausea and vomiting. The drug company hoped the same would be true of morphine, and they originally marketed heroin as a treatment for lung diseases like tuberculosis. Unfortunately, heroin actually decreases respiratory function even more than morphine, and the acetylation (and faster access to the brain) makes it more addictive, a lethal combination. Medicinal use of heroin was banned in the United States in 1924.

Metabolism takes place primarily in the liver. Lipid-soluble compounds are converted to water-soluble compounds so they are better excreted by the kidneys. CYP enzymes are extensively involved in metabolizing drugs.

Excretion refers to how a drug is eliminated from the body. Most excretion occurs through the urinary-system or the biliary system.

Pharmacokinetic factors can be modified to create a drug that is more effective or has fewer side effects. If a drug is quickly metabolized to a compound that causes a side effect, for example, the chemical structure might be altered so the drug metabolizes more slowly or is eliminated more quickly.

Often, the chemical traits or physiological effects that make drugs of abuse attractive to users are the same things that make them dangerous. The desired effects cannot be separated from the adverse effects, because they are caused by the same chemical interactions.

For example, cocaine works as an anesthetic, decreasing the body’s response to pain. This causes a feeling of euphoria that recreational users enjoy, but it can also lead to lung damage. Users do not realize that the material they are smoking is still on fire, and they can burn their mouth, larynx, and lungs as a result. Cocaine is a stimulant, and people enjoy the feeling of energy that it gives them. However, stimulants increase heart rate, blood pressure, and temperature, which can lead to a heart attack or similar crisis that lands the user in the emergency room. Some work as narcotics.