Classification is a central topic in machine learning that has to do with teaching machines how to group together data by particular criteria. Classification is the process where computers group data together based on predetermined characteristics — this is called supervised learning. There is an unsupervised version of classification, called clustering where computers find shared characteristics by which to group data when categories are not specified.

Classification is an important tool in today’s world, where big data is used to make all kinds of decisions in government, economics, medicine, and more. Researchers have access to huge amounts of data, and classification is one tool that helps them to make sense of the data and find patterns.

Here are a few examples of situations where classification is useful:

If the algorithm learns how to identify tumors with high accuracy, you can see why this might be a useful tool in a medical setting — a computer could save doctors time by analyzing x-ray images quickly. Speech Tagging

Let’s say there are linguistics researchers studying grammar structures in languages. They have a bunch of text files of transcribed speeches that they want to analyze. They want to teach a computer to recognize parts of speech, such as adjectives, subject, and verbs, in the sentences.


Let’s say you are writing a program that recommends new music to a user based on their music preferences. The user selects from a list of songs the songs that he or she likes and the program should show him or her new songs that they are likely to enjoy.

In this case, what is the input training data? What are the labels?

Say you work in a computer processor factory. As the processors are being prepared to be packaged and shipped, you must conduct a quality check to make sure that none of the processors are damaged. Describe how you might get a computer to do this job for you using machine learning and classification.

You could connect a computer to a camera that photographs each processor before it is shipped. The computer will run an algorithm that classifies the processor as damaged or not damaged. The training set you could use to teach this algorithm to determine which processors are damaged would be images of defective processors and images of functional processors.

Many times, classification algorithms will take in data in the form of a feature vector which is basically a vector containing numeric descriptions of various features related to each data object. For example, if the algorithm deals with sorting images of animals into various classes (based on what type of animal they are, for example), the feature vector might include information about the pixels, colors in the image, etc.

Here are some common classification algorithms and techniques:

A common and simple method for classification is linear regression.

Linear regression is a technique used to model the relationships between observed variables. The idea behind simple linear regression is to "fit" the observations of two variables into a linear relationship between them. Graphically, the task is to draw the line that is "best-fitting" or "closest" to the points (xi​,yi​), where xi​ and yi​ are observations of the two variables which are expected to depend linearly on each other. 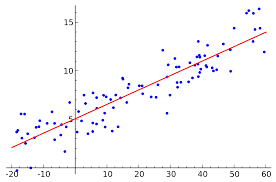 The best-fitting linear relationship between the variables x and y. [2] 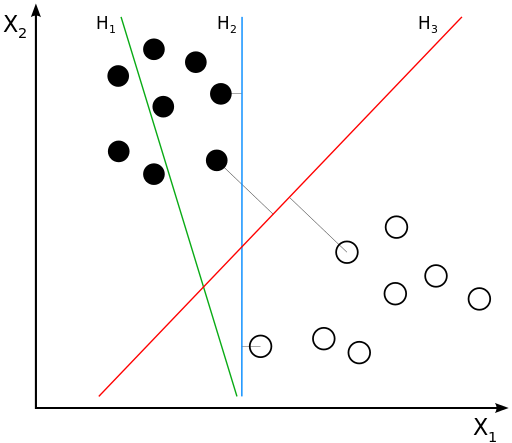 The perceptron algorithm returns values of w0​,w1​,...,wk​ and b such that data points on one side of the line are of one class and data points on the other side are of the other. Mathematically, the values of w and b are used by the binary classifier in the following way. If w⋅x+b>0, the classifier returns 1; otherwise, it returns 0. Note that 1 represents membership of one class and 0 represents membership of the other. This can be seen more clearly with the AND operator, replicated below for convenience.

Because of the independence assumption, naive Bayes classifiers are highly scalable and can quickly learn to use high dimensional (many parameters) features with limited training data. This is useful for many real world datasets where the amount of data is small in comparison with the number of features for each individual piece of data, such as speech, text, and image data.

Another way to do a classification is to use a decision tree.

Say you have the following training data set of basketball players that includes information about what color jersey they have, which position they play, and whether or not they are injured. The training set is labelled according to whether or not a player will be able to play for Team A.

What is the rule for whether or not a player may play for Team A?

They must have a blue jersey and not be injured.

To use a decision tree to classify this data, select a rule to start the tree.

Here we will use “jersey color” as the root node. 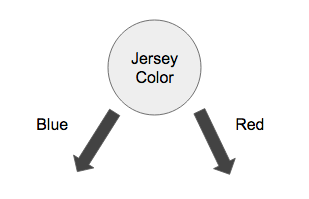 Next, we will include a node that will distinguish between injured and uninjured players. 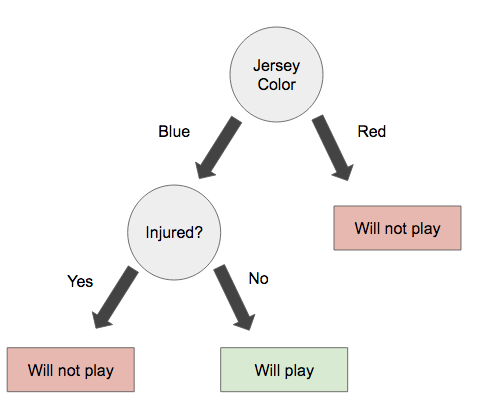 Use of Statistics In Input Data

Let's say a company is trying to write software that will take in as input the full text of a book. From the frequency of certain words, the program will determine which genre the book belongs to. Perhaps if the word "detective" appears very frequently, the program will label the book as a "mystery." If the book contains the word "magic" or "wizard" many times, perhaps the software should label the book as "fantasy." And so forth. (In this example, the language of the books is English).

Let's say that the computer program goes through each book and keeps track of the number of times each word occurs. The algorithm might find that across all genres, the words "the," "is," "and,", "I," and other very common English words occur with about the same frequency. Classifying the novels based on these word frequencies would probably not be very helpful. However, if the algorithm notices that a particular subset of words tend to occur more often in science-fiction novels and fantasy novels than in mystery novels or non-fiction novels, the algorithm can use this information to sort future book instances. Error

In the basketball team example above, the rules for determining if a player would play for Team A were fairly straightforward with just two binary data points to consider. In book genre example, a historical-fiction novel might contain the word "detective" many times if its topic has to do with a famous unsolved crime. It is possible that the machine learning algorithm would classify this novel as a mystery book. This is called error. Many times, error can be reduced by feeding the algorithm more training examples. However, eliminating error completely is very difficult to do, so in general, a good classifier algorithm will have as low an error rate as possible.

Classification, and its unsupervised learning counterpart, clustering, are central ideas behind many other techniques and topics in machine learning. Being able to classify and recognize certain kinds of data allows computer scientists to expand on knowledge and applications in other machine learning fields such as computer vision, natural language processing, deep learning, building predictive economic, market, and weather models, and more.