DNA bricks are a computer modeling method used to create complex 3D shapes from simple components. They are Lego-like building blocks based on polypeptides that allow chemists and engineers to design new molecules and devices. The final products have a defined shape and crystal structure, which the engineer can design and refine virtually prior to starting any physical experiments.

DNA bricks harness the self-assembling nature of biological molecules to create shapes and dynamic systems that would be impossible to make using traditional synthetic chemistry. The inventors of the technique describe it as "a simple, modular, and robust framework for assembling complex structures from short strands." [1]

There are older methods for engineering self-assembling molecules using DNA, and DNA bricks work along the same basic principles while attempting to expand the types of structures that can be synthesized and make the process easier and more accessible.

DNA origami is a more established technique for assembling 2D and 3D shapes, with many of the same goals as DNA bricks. DNA origami has been used to make a wide range of static shapes, including lattices, ribbons, and tunnels. Additionally, dynamic systems like circuits and switches have been developed.

While DNA origami is effective for designing complex structures, the foundation of each shape is a long strand of DNA known as the scaffold. Hundreds of shorter DNA strands may then be added to that scaffold to create the final product. Typically, each design requires a unique scaffold. Individual pieces of the scaffold cannot be removed to refine the structure. 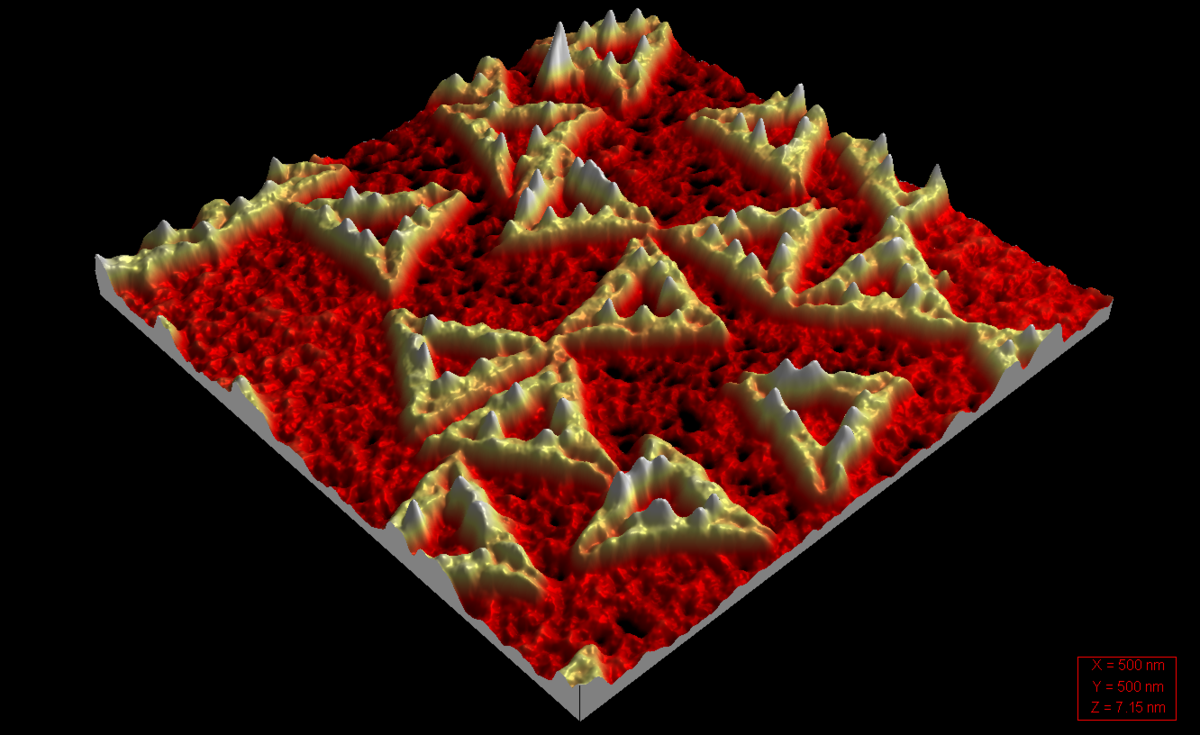 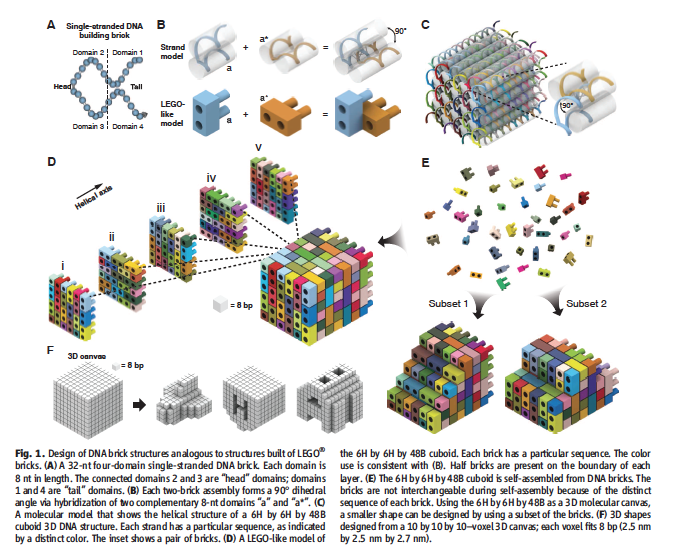 Schematic from the original journal article showing how the DNA Bricks are analagous to legos. [1]

Each brick represents a single DNA strand composed of 32 nucleotides arranged in a unique pattern. That strand is further divided into four domains, each containing eight nucleotides. The 32-nucleotide fragments can be visualized as a lego, with two pins representing the head domains and two holes representing the tail domains. The pins and holes are different shapes, such that one brick's pins will only plug into the holes of another if the DNA strands are complimentary.

Provided the base pairs of the two domains in question match up, the bricks attach at right angles. Every domain is one voxel (the volume equivalent of a pixel), so a complex shape can be constructed on a 3D molecular canvas, and then an algorithm is used to determine which DNA bricks would self-assemble into the desired structure.

In order to keep the bricks from forming unintended connections, the models include both protector bricks and boundary bricks. The protector bricks contain a string of eight thymines in a row, making it impossible for that pin or hole to connect to other bricks. Boundary bricks are placed along the outside of the finished shape. They are half bricks, each containing 16 nucleotides, that prevent any pieces from attaching outside the established parameters of the final shape.

Each DNA brick can be added or removed independently, allowing for fine-tuning the structure and creating more geometrically sophisticated products than DNA origami. The inventors of DNA bricks tested their system by making microscopic shapes that were solid, closed-cavity, and open-cavity. These included the letters of the alphabet, arabic numerals, emoticon faces, hearts, and playing dice. They tested over 100 distinct shapes before publishing their technique. 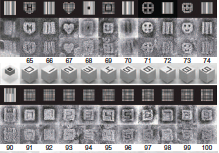 While microscopic letters and hearts may have little practical value, DNA bricks could contribute to many new medical technologies, including developing drug delivery systems, refining bio-imaging, and understanding or modifying cell signaling pathways.

DNA bricks can also be used in conjunction with the long scaffolds of DNA origami, allowing engineers to take advantage of the stability of long nucleotide chains and the fine detail that the modular bricks can provide. Potentially, these two techniques could be used together to create even more complex and robust molecules.

The modularity of the bricks also provides the opportunity to build modeling systems with polymers other than the natural form of DNA, such as RNA or DNA with synthetic nucleotides or modified backbones. Eventually, researchers could design shapes with biochemical properties that will allow the molecules to survive and act in a complex environment, such as inside the human body. For example, the engineered molecules may be resistant to being broken down by the enzymes that degrade DNA, allowing a medication based on one of these molecules to stay active in the body longer.

These designer molecules may be able to help decrease the adverse effects of medications, as well. Biotechnology is the fastest growing area of drug development, with monoclonal antibodies, vaccines, hormones, and enzymes all playing increasing roles. Any large protein has the potential to cause allergic reactions or less severe immune system flare-ups, but if a drug could be fine-tuned to decrease its immunogenicity, more patients may be able to tolerate it.

[2] Image from https://commons.wikimedia.org/wiki/File:DNAOrigamiTriangular.png used under Creative Commons licensing for reuse and modification.