Why some people say it's true: Everything follows Newton's first law of motion.

Why some people say it's false: A rolling ball stops without any external force, and thus it is not continuing its motion and Newton's first law is not followed.


The statement is true.

Newton's first law of motion states that "Any object continues in its state of rest or motion unless it is compelled by a net external force."

What happens when a ball rolls, and then stops? When a ball is allowed to roll on a rough horizontal surface, no static or kinetic frictional force acts on it. So, if no friction is acting on it, then why does the ball come to rest? According to Newton's first law, the ball should continue to roll, since there is zero friction.

The answer lies in another type of friction, called rolling friction. Rolling friction occurs because the objects in contact are not perfectly rigid. Ideally, when a ball is placed on a rough surface, only one point of the ball touches the ground. However, as pressure is force divided by area, this increases the pressure at the contact point and objects near it deform. This deformation can be very small and may not be noticed by the naked eye. Due to the deformation at the contact point, the normal reaction does not pass exactly through the center of the ball. Because of the deformation, the normal reaction tilts slightly and produces resistance in the motion. This results in rolling friction. 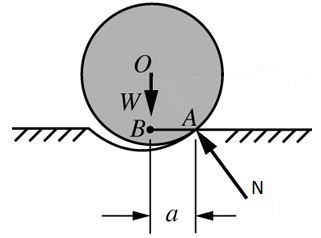 Query: Why does the ball roll a greater distance than a cube of the same mass?
Reply: Rolling friction is much smaller than static and kinetic friction, and therefore the rolling objects travel a much larger distance before coming to rest.

When the velocity of the center v and the angular velocity ω of a round object are related as v=ω×r, where r is the position vector of the particle with respect to the center of the round object, which friction will act on the rolling object at an instant?

The surface is horizontal and rough.
No other force acts in the horizontal direction.