For instance, when a book is slid across a table, it immediately starts to slow down until it comes to a rest. Molecular forces between the surface of the book and the table resist sliding and exert a force opposite the direction of the object's motion.

Similarly, fluids can also exert friction: when a skydiver jumps out of an airplane, the magnitude of her acceleration immediately begins to decrease. As the skydiver falls through the air, she must transfer energy to air molecules to push them out of the way. Fluid-based friction is generally called drag or fluid resistance (or air resistance in the case of air) and is discussed separately. This article focuses on the friction forces between solid surfaces.

Although friction fundamentally results from complex interactions at the molecular level, for many everyday macroscopic materials, a simple intuitive model for friction suffices. Consider the static situation of a heavy box placed on a floor. In an attempt to move the box, suppose that a gradually increasing horizontal force of magnitude Fpush​ is applied to the box. As long as the box remains stationary, the net force on the box must be zero, and the friction force fstatic​ is exactly equal and opposite to that of the force applied to the box. In this case, the friction force is said to be static because the object is not moving: Fpush​=fstatic​.

In other words, as long as Fpush​ is below some "critical force" Fcrit​ required to dislodge the box, the static friction force simply acts against the applied force.

Empirically, one generally observes that the critical force is directly proportional to the magnitude of the normal force N of the box against the floor. The constant of proportionality is called the coefficient of static friction as is generally symbolized by the Greek letter mu μs​ (with a subscript to indicate that the friction is static):

It is worth noting that the normal force exerted on the box need not simply be equal to its weight; additional forces can be applied to the box, which can increase or decrease the size of the critical force. 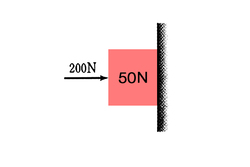 As the applied force increases, at some point Fpush​ eventually exceeds Fcrit​ and the object is dislodged. Here, the nature of the interaction between the two surfaces changes. Once the object starts moving, the nature of the molecular interactions between the two surfaces is no longer the same as it was during the static configuration. Instead, the friction is said to be kinetic. 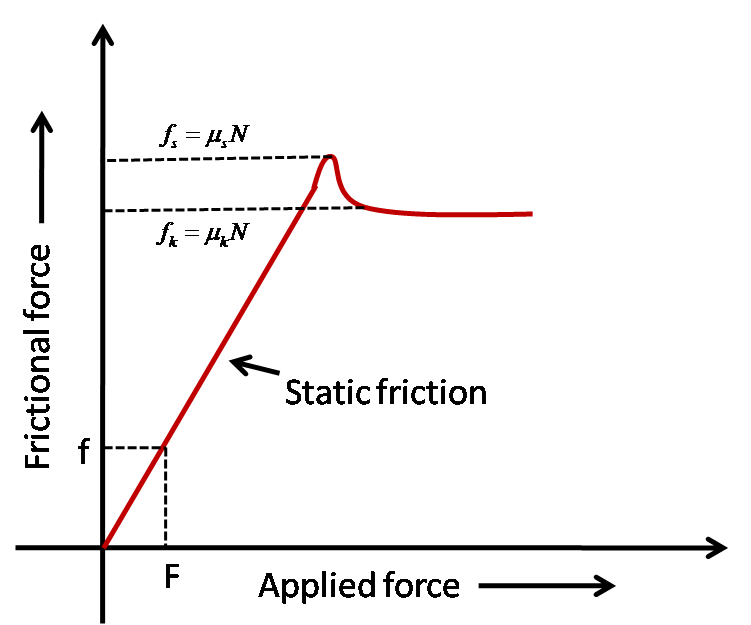 The constant of proportionality is the coefficient of kinetic friction μk​. Note that fkinetic​≤Fcritical​, or else it would be impossible to get the box moving. As a result, μk​≤μs​. In other words, it requires less force to push an object that is already moving than to push a static object.

Note that in both the static and kinetic cases, friction never moves an object on its own. Static friction simply provides the minimum force required to cancel the applied force, while kinetic friction provides a constant force to an already moving object. 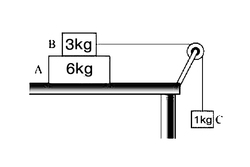 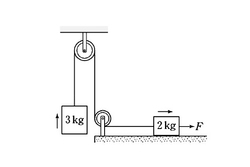 When the force F is acting toward the right on the 2 kg in the diagram, both objects are in uniform motion.

If the coefficient of kinetic friction between the 2 kg mass and the ground is 0.5, what is the magnitude of the force F (in N)?

As an object slides across a rough surface and slows down, friction does work against the object. To investigate where the dissipated energy goes, consider that at the molecular level atoms collide and weak bonds are broken, which leads to increased molecular motion. Ultimately, this results in heating of the two surfaces and the surrounding air.

In the case of constant kinetic friction, the magnitude of the total energy loss due for an object that slides a distance of d is simply given by

A box moving at an initial speed of v slides over a floor. The coefficient of kinetic friction between the box and the floor is μk​. Over what distance does the box slide before it comes to rest?

The simplest solution is to note that all of the initial kinetic energy of the box is ultimately dissipated by friction into heat, so it must be the case that the stopping distance d is given by

Consider a car moving along a straight horizontal road with a speed of 72km/h. If the coefficient of kinetic friction between the road and tires is 0.5, find the shortest distance over which the car can be stopped in meters.