The Doppler effect causes a wave to be received with a frequency different from the one with which it is emitted as a result of the motion of the emitter and/or receiver. The effects are most commonly studied in sound waves and light waves.

It is noticeable when a train or a car passes by while emitting a horn sound. As it approaches, its horn sounds higher in pitch. However, as it leaves, the sound of the horn apparently has a lower pitch. This is because, when the observer and source approach each other, the frequency increases, but when they recede away, the frequency decreases. The true frequency (or emitted frequency) of the horn is actually somewhere between the "approach" and "recede" frequencies.

The wave fronts in front of the source become close together, meaning a stationary observer on the right side of the .gif receives an effectively higher pitch. [1]

To see what causes this apparent frequency change, imagine a boat that is lying at anchor in a gentle sea where the waves have a time period of T = 3.0 sec. This means that every 3.0 second a crest hits the boat. The following figure shows this situation, with the water waves moving toward the left. If a watch is set to t = 0 just as one crest hits, the watch will read 3.0 sec when the next crest hits and 6.0 sec when the third crest hits, and so on. 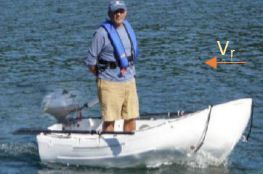 A person in a boat with water waves moving towards him

From these observations, it can be concluded that the wave frequency is f = 1/T = 1/(3.0 s) = 0.33 Hz. Now suppose the boat is headed directly into the incoming waves. Again, the watch is set to t = 0 as a crest hits the front of the boat. Now, however, because the boat is moving towards the next wave crest as it moves toward the boat, it hits the boat in less than 3.0 s after the first hit. In other words, this period observed is shorter than the 3.0 s period observed when the boat was stationary. Because f = 1/T, a higher wave frequency is observed than when the boat was at rest. 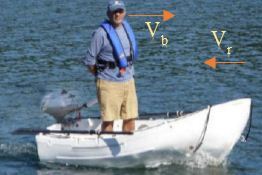 Boat moving towards the water waves

If the boat is turned around and move in the same direction as the waves, the opposite effect is observed. The watch is set to t = 0 as a crest hits the back of the boat. Because the boat is now moving away from the next crest, more than 3.0 s will elapse on the watch by the time that crest catches the boat. Thus, a lower frequency than when you were at rest will be observed. 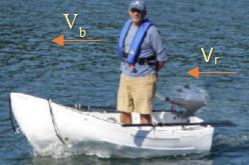 Let us now examine a situation with sound waves. In this case, an observer O is moving and a sound source S is stationary. For simplicity, we assume that the air is also stationary and that the observer moves directly toward the source. The observer moves with a speed vo​ toward a stationary point source vs​=0, where stationary means at rest with respect to the medium, air.

If a point source emits sound waves and the medium is uniform, the waves move at the same speed in all directions radially away from the source; such wave is called as spherical wave. It is useful to represent these waves with a series of circular arcs concentric with the source, as in the figure. Each arc represents a surface over which the phase of the wave is constant. For example, the surface could pass through the crests of all waves. We call such a surface of constant phase a wavefront. The distance between adjacent wave fronts equals the wavelength λ. In the figure, the circles are the intersections of these three-dimensional wave fronts with the two-dimensional paper.

We take the frequency of the source in figure to be f, the wavelength to be λ, and the speed of sound to be v. If both the observer and the source are stationary, then he or she would detect wave fronts at rate f. (That is, when vo​=0 and vs​=0, the observed frequency is the same as the emitted frequency.) 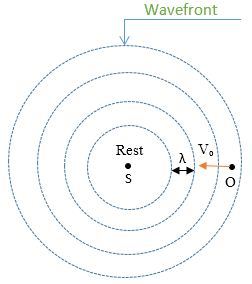 An observer, moving towards a stationary sound source, notices an increase in frequency

If the observer is moving away from the source, the speed of the wave relative to the observer decreases and v′=v−vo​. The frequency heard by the observer in this case is decreased and is given by
f′=(vv−vo​​)f.

Now consider the situation in which the source is in motion and the observer is at rest. There are two observers A and B along the same line of motion of the source, and the source moves towards A and away from B. Let the source emit a crest at t=0. This crest moves in all directions and expands radially with speed v. The source is also moving with speed vs​. After a time period t=T, the source emits another crest. At this instant in time the first crest has traveled a distance vT and the source has moved by vs​T. Thus the observer A will notice the distance between the two crests to be decreasing and observer B will notice the distance between the two crests to be increasing. 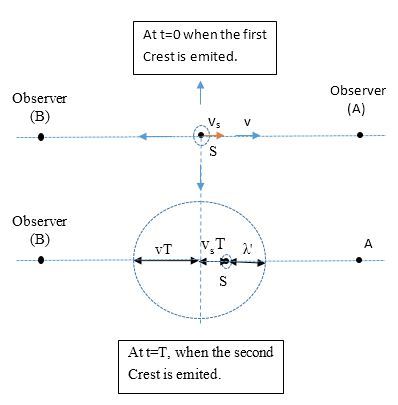 Finally, we find the following general relationship for the observed frequency: f′=(v−vs​v+vo​​)f. In this expression, the signs for the values substituted for vo​ and vs​ depend on the direction of the velocity. A positive value is used for motion of the observer or the source toward the other, and a negative sign for motion of one away from the other.

A boy is standing in front of a stationary train. The train blows a horn of frequency 400 Hz. If the wind is blowing from the train to the boy at a speed of 30 m/s, what will be the frequency of the sound the boy hears?

2) Meteorologists use a similar principle to read weather events. In this case, the stationary transmitter is located in a weather station and the moving object being studied is a storm system.

4) Astronomers use Doppler effect to determine the movements of stars and planets which because of their far off distances from us and the consequent smallness of the parallactic angles are very difficult to measure. Any star or planet receding away from earth shows a decrease in frequency or increase in wavelength often called as red shift. The star or planet which is moving closer to earth shows increase in frequency or decrease in wavelength known as blue shift.