In describing a region of a field, which assigns a magnitude and direction—in other words, a vector—to each point in space, it makes sense to draw an analogy with water currents. The electric field vectors that pass through a surface in space can be likened to the flow of water through a net. The greater the magnitude of the lines, or the more oriented the lines are against (perpendicular to) the surface, the greater the flow, or flux. This analogy forms the basis for the concept of electric flux.

A flux through a given surface can be "inward" or "outward" depending on which way counts as "in" or "out"—that is, flux has a definite orientation.

For a closed surface (a surface with no holes), the orientation of the surface is generally defined such that flux flowing from inside to outside counts as positive, outward flux, while flux from the outside to the inside counts as negative, inward flux. To remember this choice of orientation, we divide the closed surface into many small patches of surface and assign a vector ai​ to each small patch of surface that indicates the normal (perpendicular) to the surface. In addition, the magnitude of each ai​ is defined to be the area of the corresponding patch. 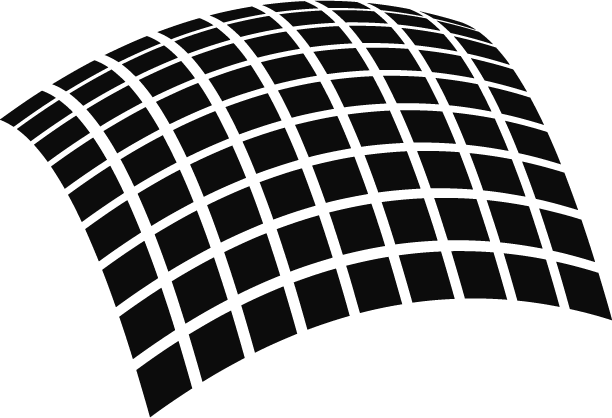 If the surface is partitioned into patches that are sufficiently small, then the electric field Ei​ at all points on each patch essentially becomes constant. In that case, the electric flux Φpatch​ through the patch is given by the dot product, which calculates the component of Ei​ parallel to ai​: 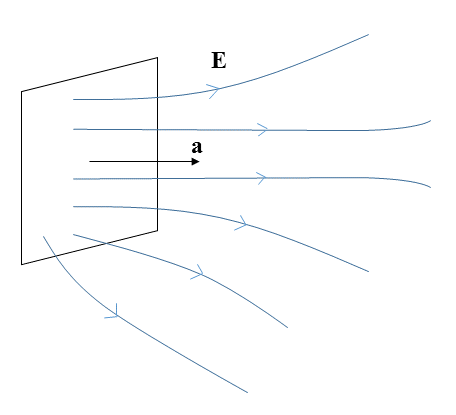 The total electric flux through the entire surface, meanwhile, is the sum over all patches:

As the ai​ become vanishingly small, as in the case of a continuous surface, the sum is replaced with a surface integral:

The "S" in the limits of integration indicates that the integral is to be taken across the entire surface for all infinitesimal surface elements da. Fortunately, the electric flux can often be computed without resorting to computing the integral explicitly.

Compute the electric flux across a spherical surface of radius R that contains a charge q at its center. 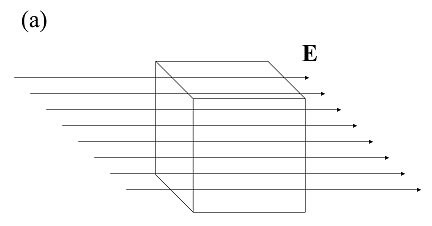 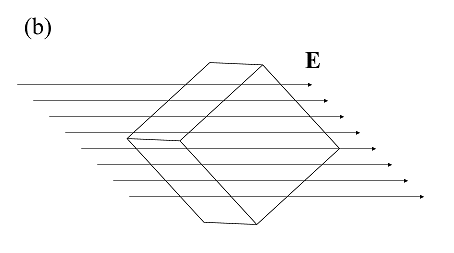 Compute the electric flux across a cube of side length s placed (a) perpendicular to and (b) 45∘ with respect to a uniform electric field of magnitude E as shown.

If the cube is placed 45∘ with respect to the field, then two faces each contain flux −Es2cos45∘=−Es2/2​. Similarly, the other two faces with nonzero flux contain Es2cos45∘=Es2/2​. Therefore, the total flux is again zero.

In the example of the flux through a spherical surface, the flux was independent of the radius of the sphere. In that case, the total flux depended only on the charge contained inside the sphere. This makes sense intuitively; as the sphere grows larger, the sphere captures "more" electric field, but this always accompanies a concomitant decrease in field strength. The factors of R2 growth and 1/R2 decay exactly cancel out.

The same, it turns out, holds for other surfaces as well. If the walls of a box containing a charge are expanded, the total flux through the box remains the same, as the increased number of field lines captured by the expanded walls is exactly canceled by a decrease in field strength farther from the walls. 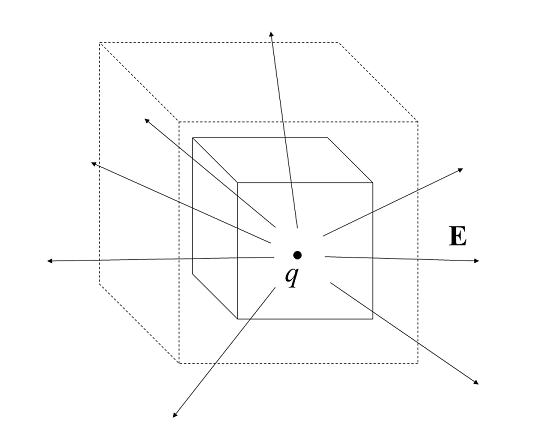 Based these two observations, one might conjecture that flux is always independent of the dimensions of the containing surface and depends only on the magnitude of the total charge enclosed. This forms the basis for Gauss' law, which holds that the total electric flux through a surface is proportional to the enclosed charge. Furthermore, on the basis of the example of the spherical surface, for which the total electric flux was q/ϵ0​, the constant of proportionality must be 1/ϵ0​.

A more detailed discussion of Gauss' law can be found in the accompanying page.

A charge q is split by one face of a cube. What is the total electric flux through the cube?

It is not easy to compute the electric flux directly using the definition. However, by Gauss' law, we know that a surface containing the entire charge must have total flux q/ϵ0​. Therefore, the cube, which contains half of the total flux from the charge, must contain electric flux q/(2ϵ0​).

A point charge of charge q=96ϵ0​ is placed at one corner of a cube as shown. What is the electric flux through the shaded face? 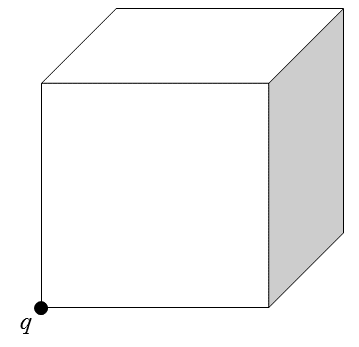