The Euler line of a triangle is a line going through several important triangle centers, including the orthocenter, circumcenter, centroid, and center of the nine point circle. The fact that such a line exists for all non-equilateral triangles is quite unexpected, made more impressive by the fact that the relative distances between the triangle centers remain constant. 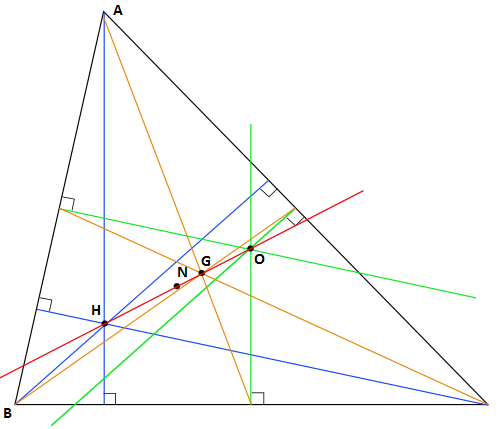 The simplest proof makes use of homothety, specifically the one with center at the centroid G of the triangle, with scale factor −21​. This sends vertices A,B,C to the midpoints of the opposite sides, since the centroid divides the medians in a 2:1 ratio, meaning that triangle ABC is sent to the medial triangle.

The proof above shows more than collinearity: since H is sent to O through a scale factor of −21​, we have HG=2GO. In fact, more is true: if N is the nine-point center of the triangle, we have

The Euler line also contains dozens of other triangle centers, some of which have only been discovered recently. Of special note are the following points:

Additionally, if A1​ is the foot of the altitude from A to BC and Ma​ is the midpoint of BC (with B1​ and Mb​ defined analogously), then

The intersection of A1​Mb​ and B1​Ma​ lies on the Euler line.

Points A,B, and C are randomly chosen on a unit circle. The locus of the orthocenter of △ABC is a region R. What is the area of R?

Instead of focusing on the orthocenter, it helps to focus on the other two major triangle centers: the centroid and the circumcenter. The circumcenter is always the center of the unit circle, so it is only necessary to note that the centroid can lie anywhere within the unit circle, and nowhere else (why?). Since HG=2GO, this implies that the maximum possible value of H is 3, and the region R is a circle of radius 3. The area of R is thus 9π. □​

Another result due to the properties of the Euler line: 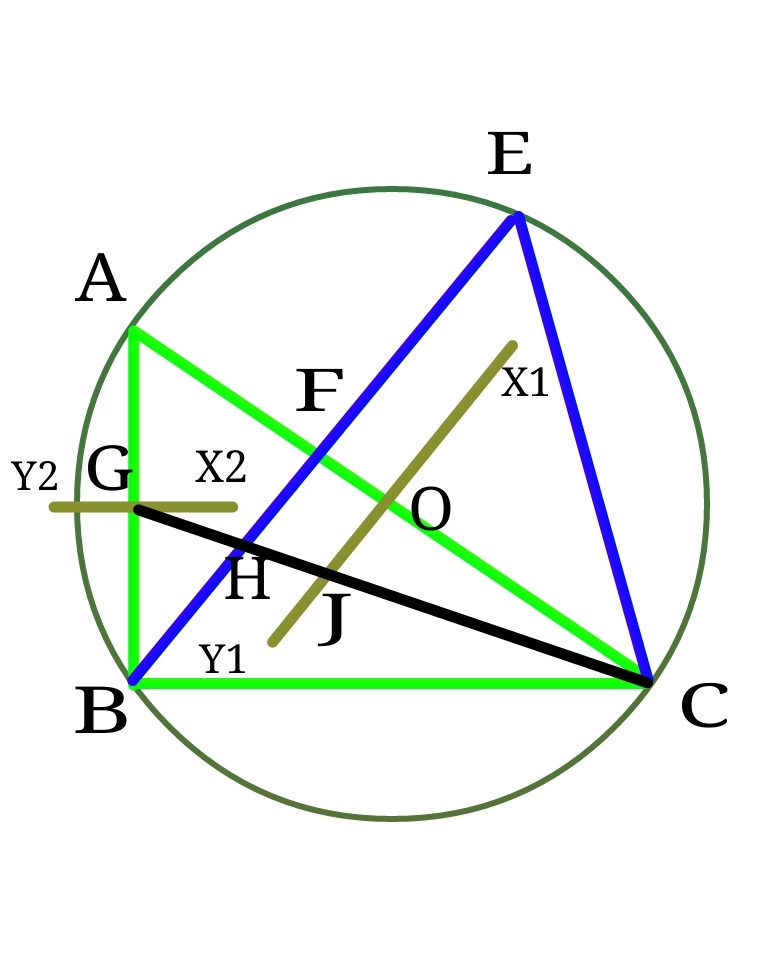 Mohit, influenced by Akshat and Anshuman, took a right △ABC (right angled at B), where AB=5.5cm and BC=8cm, and started doing aimless constructions, the steps of which are given below:

Mohit then wondered what OJBH​ could possibly be equal to.