The orthocenter of a triangle is the intersection of the triangle's three altitudes. It has several important properties and relations with other parts of the triangle, including its circumcenter, incenter, area, and more.

The orthocenter is typically represented by the letter H. 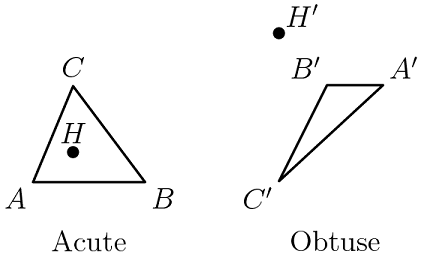 Because the three altitudes always intersect at a single point (proof in a later section), the orthocenter can be found by determining the intersection of any two of them. This is especially useful when using coordinate geometry since the calculations are dramatically simplified by the need to find only two equations of lines (and their intersection).

Finally, the intersection of this line and the line x=5 is (5,415​), which is thus the location of the orthocenter. □​

The most natural proof is a consequence of Ceva's theorem, which states that AD,BE,CF concur if and only if FBAF​⋅DCBD​⋅EACE​=1, where D,E,F are the feet of the altitudes.

Multiplying these three equations gives us

Rearranging the left-hand side gives us

Therefore, the three altitudes coincide at a single point, the orthocenter.

For convenience when discussing general properties, it is conventionally assumed that the original triangle in question is acute. The same properties usually apply to the obtuse case as well, but may require slight reformulation.

An incredibly useful property is that the reflection of the orthocenter over any of the three sides lies on the circumcircle of the triangle. There is a more visual way of interpreting this result: beginning with a circular piece of paper, draw a triangle inscribed in the paper, and fold the paper inwards along the three edges. The three arcs meet at the orthocenter of the triangle.[1]

This result has a number of important corollaries. The most immediate is that the angle formed at the orthocenter is supplementary to the angle at the vertex:

Another follows from power of a point: the product of the two lengths the orthocenter divides an altitude into is constant. More specifically,

The application of this to a right triangle warrants its own note:

Triangle ABC has a right angle at C. Point D lies on hypotenuse AB such that CD is perpendicular to AB. If AD=4 and BD=9, what is the area of the triangle?

Finally, this process (remarkably) can be reversed: if any point on the circumcircle is reflected over the three sides, the resulting three points are collinear, and the orthocenter always lies on the line connecting them.

Another important property is that the reflection of orthocenter over the midpoint of any side of a triangle lies on the circumcircle and is diametrically opposite to the vertex opposite to the corresponding side.

The circumcircle of the orthic triangle contains the midpoints of the sides of the original triangle, as well as the points halfway from the vertices to the orthocenter. This circle is better known as the nine point circle of a triangle.

Learn more in our Outside the Box Geometry course, built by experts for you.