For this reason, the column space is also known as the image of A (denoted im(A)), as it is the result when A is viewed as a linear transformation of the vector space Rm (where m is the number of rows of A). In particular, the image of A is necessarily a subspace of Rm, hence the term "fundamental subspace."

Then the column vectors are

so the nullspace is in fact a vector space. When A is viewed as a linear transformation, the nullspace is the subspace of Rn that is sent to 0 under the map A, hence the term "fundamental subspace."

The nullspace consists of all vectors x such that Ax=0. This defines a system of linear equations that can be solved to give the family of solutions

which defines a vector space with basis ⎩⎪⎪⎨⎪⎪⎧​⎝⎜⎜⎛​−1−101​⎠⎟⎟⎞​,⎝⎜⎜⎛​−3010​⎠⎟⎟⎞​⎭⎪⎪⎬⎪⎪⎫​. As there are two vectors in this basis, the dimension of the nullspace is 2.

The row space and left nullspace are defined as the column space and nullspace of AT, the transpose of A, respectively. In this way, they are subspaces of Rn.

The fundamental theorem of linear algebra relates all four of the fundamental subspaces in a number of different ways. There are main parts to the theorem:

Part 1:
The first part of the fundamental theorem of linear algebra relates the dimensions of the four fundamental subspaces:

This is illustrated by the example in previous sections: the dimension of the column space of

This first part of the fundamental theorem of linear algebra is sometimes referred to by name as the rank-nullity theorem.

Part 3:
The final part of the fundamental theorem of linear algebra constructs an orthonormal basis, and demonstrates a singular value decomposition: any matrix M can be written in the form U∑VT, where

This part of the fundamental theorem allows one to immediately find a basis of the subspace in question.

This can be summarized in the following table:

Or it can also be summarized in the following image, where the arrows represent the results of multiplication: 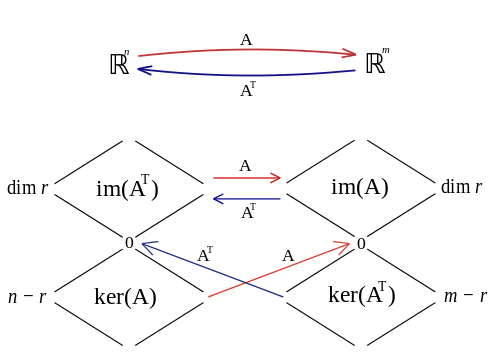 The relationship between the four fundamental subspaces. Source: https://commons.wikimedia.org/wiki/File:Thefoursubspaces.svg