Gravity or gravitation is a natural phenomenon by which all things with energy are brought toward (or gravitate toward) one another, including stars, planets, galaxies, and even light and sub-atomic particles. Gravity is responsible for many of the structures in the universe, by creating spheres of hydrogen—where hydrogen fuses under pressure to form stars—and grouping them into galaxies. On Earth, it gives weight to physical objects and causes the tides. It has an infinite range, although its effects become increasingly weaker on objects farther away.

Gravity is accurately described by the general theory of relativity which describes gravity not as a force but as a consequence of the curvature of spacetime, caused by the uneven distribution of mass/energy, and resulting in gravitational time dilation, where time lapses more slowly in lower (stronger) gravitational potential.

However, for most applications, gravity is well approximated by Newton's law of universal gravitation, which postulates that gravity is a force where two bodies of mass are directly drawn or attracted to each other according to a mathematical relationship, where the attractive force is proportional to the product of their masses and inversely proportional to the square of the distance between them.

Mass is a fundamental property of all particles, and in conventional theories of physics, from Newtonian mechanics to string theory, it is positive or zero. In addition to setting the scale of particle acceleration in response to forces and setting the speed limit for particles, mass gives rise to gravitational force. It should be noted that only zero mass particles, the photon and the gluon, travel at the speed of light. 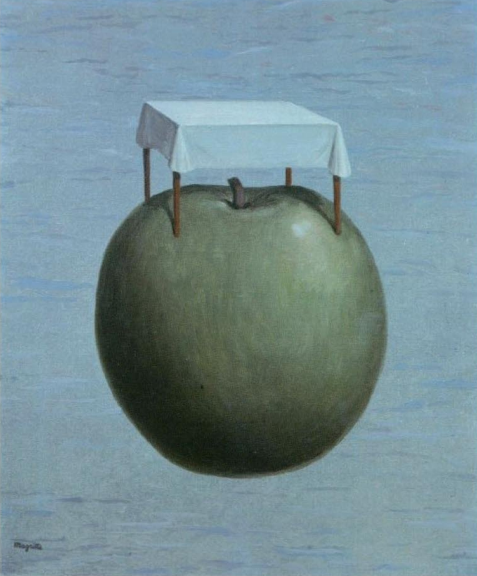 Everyday activities like dragging something across the floor or throwing a medicine ball give us insight into what is called inertial mass, minertial​, which is the resistance of an object to acceleration under a net force minertial​=aFnet​​. The bigger something is, the more inertial mass it tends to have and the harder it is to move the object.

We know from our experiences that it is harder to carry a box of books up the stairs than a tea kettle, and there is also a common aphorism, "the bigger they are, the harder they fall." All these show that gravity is a mass-dependent force: the bigger something is, the more gravitational mass it has and the harder it is to move the object. That is, Fgravity​∼f(mgravitational​), where f is some monotonically increasing function of mgravitational​.

However, the relationship between these two masses is not clear, and neither is the form of f. Happily, there is a simple experiment to demonstrate what's known as the equivalence principle.

After centuries of controversy as to whether or not Galileo actually dropped anything from the Leaning Tower of Pisa, TV physics personality Brian Cox finally solved the problem of relating minertial​ to mgravitational​. Using an enormous vacuum chamber, a feather and a bowling ball were dropped from a tall crane. The ball and feather were found to hit the ground at precisely the same time, which showed that their accelerations were identical: afeather​=abowling ball​. This result implies that the acceleration of a mass in a gravitational field is independent of its mass.

If we take this seriously, it shows that

which we find from Fnet​=Fgravity​=minertial​a.

All else being equal, the ratio of the force felt by an object due to its gravitational mass to its inertial mass is a constant. The logic of this condition demonstrates two things:

This makes it clear why all objects accelerate uniformly in the gravitational field of the Earth.

This gives rise to a question: Is there any fundamental distinction between acceleration and a gravitational field?

The inertial and gravitational masses of an object are indistinguishable:

In the previous example, we found the force of gravity on a particle with mass ma​ in a gravitational field was ma​Γ. If we consider Γ to be the field of another particle of mass mb​, located a fixed distance away, then we can say the force on particle a is ma​Γb​.

However, we can view this interaction the other way around, as the force felt by particle b due to the field from particle a. From this perspective, the force can be written as mb​Γa​, yielding

which implies that Γi​∝mi​. Thus, the force of gravity between two massive objects is proportional to the product of their masses Fab​∝ma​mb​. Because particle mass is non-negative, the gravitational interaction between massive objects can only be attractive.

Now we nearly have a complete description of Newtonian gravity, and all that is left is the force's dependence on the distance between particles. Here, there are two ways of going. One way is to point out that experimental measurements of the force of attraction between massive objects show that the gravitational force decreases as the inverse-square of the distance between objects, r−2. However, we'll consider a more interesting approach.

Let's envision the field as a bundle of lines emanating in all directions. The number of lines emerging from the particle is in direct proportion to the mass of the particle (ΓS​∝ms​), and the strength of the interaction with another particle mr​ is proportional to the number of field lines from ms​ which intersect mr​.

Concretely, the number of field lines is a constant, but the surface area of the sphere grows as 4πr2, so the density of field lines shrinks as ΓS​∼4π1​r2ms​​. We can state this in the form of a flux equation. If we call the flux of field lines from ms​ through a surrounding surface ΦG​, then we have ΦG​∼r2ms​​. Now, since field lines point inward toward the source particle, the flux through the surface will be inward and thus have a negative sign.

Now we have the complete form for Newton's law of gravitation, and the gravitational field due to a particle ms​ at a distance r is given by

The ∼ implies that there is a numerical prefactor we've left out. We'll call this number G, the gravitational constant. Its measurement was no small historical achievement.

The strength of the gravitational interaction between two particles of masses ma​ and mb​, separated by a distance r, is given by

The above equation can also be expressed in vector form: 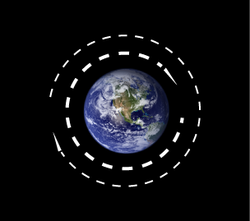 Two identical rockets are in circular trajectories around Earth under the control of their engines. Rocket A is twice as far from the center of Earth as rocket B, yet they have the same centripetal acceleration. What is the ratio of the velocity of rocket B to that of rocket A, vA​vB​​?

An object's mass is 120 kg. When it is taken away to the moon, it is noticed that the object's mass remains the same but its weight has changed.

What will be the weight (in Newtons) of the object on the moon?

We mentioned that the distance dependence in Newton's law can be obtained by considering the total flux of gravitational field lines through an imaginary sphere. A surprising corollary to the flux relation, which we will now prove, is that a particle located inside of a spherically symmetric shell of mass will feel no gravitational attraction to the shell.

Show that a particle mr​, located inside a spherical shell of total mass Ms​, feels no gravitational attraction to the shell. 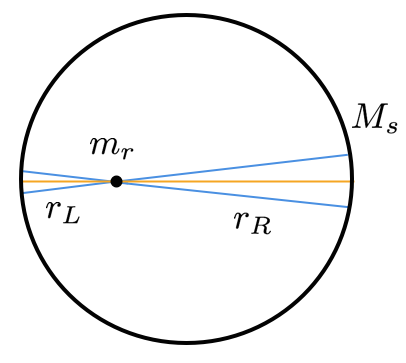 We focus on the diagram of the shell that's intersected by the spherical sections of radii rL​ and rR​. The two sections intersect the same small solid angle ΔΩ (we exaggerate the size of the sections for clarity, but they are taken to be very small), and thus the entire shell can be calculated using opposing pairs of equal solid angles. The entire shell has mass Ms​ and thus has mass density σ=4π1​R2MS​​, where R is the radius of the shell. Particle mr​ is attracted by both sections in opposite directions.

The section of radius rL​ has a total mass of ML​=σΩrL2​, and the entire section is located a distance of approximately rL​ from the particle. Thus, the gravitational field strength at mr​ due to the section is ∼ΓL​=GrL2​ML​​=GrL2​σΔΩrL2​​=GσΔΩ and points along the gold line toward the left.

You may have noticed that the previous calculation results in an rL​-independent expression. The calculation for the gravitational field due to the rR​ section is similarly independent of rR​ and is equal to GσΔΩ, pointing along the gold line toward the right. I.e. the net force on mr​ from the two sections of the shell is GσΔΩ−GσΔΩ=0.

Because the shell can be deconstructed into a collection of such pairs, there is no net force on the particle, because the attraction of every patch of surface cancels exactly with its partner. Note that this result is general for any particle inside the spherical shell, and does not depend on the particular location inside of the shell. □​

Using a similar line of argument, one can show that outside of a spherical shell of mass Ms​, the field strength is given by Γs​=Gr2Ms​​, where r is the distance from the center of the sphere. Can you do it? 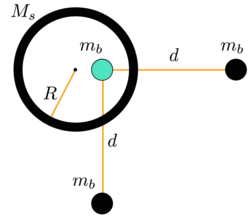 A green sphere of mass mb​ is placed inside a spherical shell of radius R and mass Ms​. Two spheres identical in mass to the green sphere are placed a distance d to the right and to the bottom, respectively, of it. What is the magnitude of the gravitational force on the green sphere?

Mechanics problems often approximate the potential energy change of an object near the surface of Earth to be ΔU=mgΔh, the mass of the object times the change in height times a field of constant strength g=9.8 m/s2. However, we know that the gravitational field of Earth falls off as the square of the height above the Earth's surface ∼r−2=(REarth​+h)−2, where REarth​ is the radius of Earth, i.e. non-constant. The question stands, "How do we reconcile the approximation with the inverse square law of gravity?"

Let's calculate the work required to lift an object a distance Δh in the gravitational field of Earth. Since the particle starts and ends with zero velocity, the work done is stored in the form of potential energy, W=ΔU. We have

The integral is simple and gives us

Now, as long as the change in height Δh is small compared to the radius of Earth, we can say (REarth​+Δh)REarth​≈REarth2​. We therefore have

Thus, we have derived the connection between the usual g and the expression obtained from the approximation that underlies it: 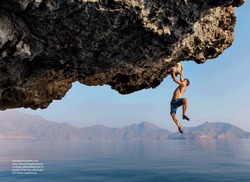