Resistors plays a major role in reducing the current in circuits and therefore protecting circuits from damage resulting from overdraw of current by dissipating the kinetic energy of electrons in current as thermal energy (heat). This is what allows electricity to be useful: the electrical potential energy from the voltage source is converted to kinetic energy of the electrons, which is then transferred to something we wish to power, such as a toaster or a laptop.

The heat dissipation within a resistor is simply the power dissipated across that resistor since power represents energy per time put into a system. So the relevant equation is the equation for power in a circuit:

The origins of this power dissipation are the inelastic collisions of conducting electrons with the lattice of metallic ions forming a conductive material. On a macroscopic level, the formula can be derived by considering the amount of energy yielded by moving a charge through a potential difference across a resistor.

From the microscopic interpretation of Ohm's law, the resistance in the classic formula V=IR for the current through a circuit given a driving voltage can be expanded as:

where m and e are the mass and charge of an electron respectively, L and a are the length and area of the conductive material comprising the resistor, n is the number density of charge carriers, and τ is the time interval between two collisions of electrons in the resistor. The resistance can also be expanded as:

The inelastic collisions of electrons moving through a conductor are the cause of resistance. The crystal structure of metal atoms in a conductor hinders the flow of electrons through it. At any given instant, electrons have a certain probability of scattering inelastically off of the metallic lattice, imparting some of their energy to the lattice as kinetic energy, i.e. heat. This heat dissipation in the lattice, called Joule heating, is the source of power dissipation in a resistor. Note that while inter-electron collisions may yield their own associated thermal energy of motion, this energy stays internal to the system until it is dissipated into the metallic lattice, which does not carry the current.

Computing the mean free time of electrons moving through the conductor shows that the electrons move past a large number of lattice sites before interacting significantly with the metal cations. The explanation for this fact comes from quantum mechanics and wave-particle duality. Due to the wave nature of the electron, electrons are able to propagate without scattering inelastically for a longer distance through the lattice than expected, and the scattering probability is much more sensitive to lattice defects than the density of the lattice.

Derivation for the equation of heat generated in a circuit, Joule's law of Heating 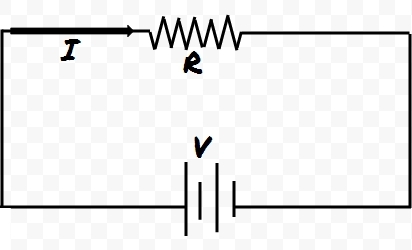 Consider a circuit as shown in the diagram, with a potential source (battery) of V volts driving a current I around a circuit and across a resistor of resistance R. According to Ohm's law, these three quantities are related by the equation V=IR.

Now compute the total work done by the battery in driving current around the circuit. Assume that the circuit has been closed for time t. According to the definition of electric current, the total charge passing through the circuit in time t is Q=It. Since a potential difference V is defined as the work done to transfer a unit charge from a potential V1​ to a potential V1​+V, QV Joules of work must be done to transfer a charge Q across the same potential. Since Q=It, the total work W done in moving this charge can be written: