Infinity is the number at the end of the real number line.

Why some people say it's true: because infinity is the number which is bigger than all of the other numbers.

Why some people say it's false: because infinity is not a number and the number line doesn't have an end.

The statement is false.

The misconception at work here is that "if you keep continuing up along the number line past bigger and bigger counting numbers, then eventually the counting numbers just give up (somewhere after the point where your teacher gets tired of making tic marks), and there will be an infinity sign (∞) there to mark the end of the number line." Alternatively, some say that "infinity is at the end of the number line, but there are still infinitely many numbers less than infinity and between infinity and any other point on the line." Both of these notions have roots in calculus-related concepts; however, they are both fundamentally incorrect.

When your teacher "ends the number line" with ∞, this is actually a misleading shorthand for representing that the number line goes on forever. A less misleading way to represent this notion might be to extend the number line out with an arrow. We might additionally indicate that the whole numbers continue after we decide to stop recording them by using the common general-term series notation: "...n,n+1,n+2,..." to describe, in this case, the set of all non-negative, whole numbers. This set is also commonly known as the "natural numbers (N)" or as the "non-negative integers." 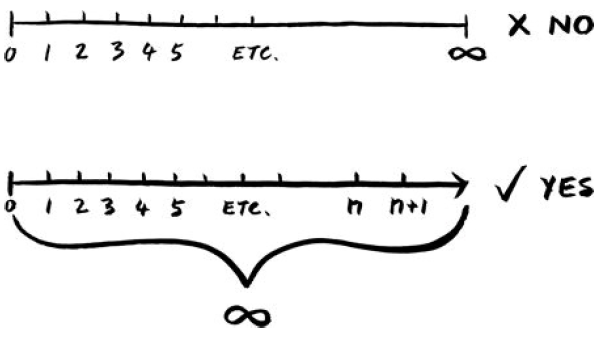 The misconception is in choosing to treat ∞ as an integer or whole number or as one of the real numbers. This is not the same as believing that ∞ is "real" or "unreal" in the English sense of the word. Infinity is a "real" and useful concept. However, infinity is not a member of the mathematically defined set of "real numbers" and, therefore, it is not a number on the real number line.

The set of real numbers, R, is explained instead of defined in most pre-collegiate schools. And, even then, it's usually only explained briefly, with a description to the effect of "all of the points on a number line," and with the additional follow-up that "the negative real numbers are to the left of 0 and the positive numbers are those to the right of 0."

Rebuttal: In the study if limits, infinity (∞) is treated just like any other number. Why do we do this in calculus if infinity isn't actually a number?

Reply: Many are taught about limits in precalculus or calculus exactly as you describe, and the way infinity is treated does, misleadingly, suggest that infinity is just another number. For example, given a function with a horizontal asymptote at 5, we might say that the limit of f(x) as x approaches infinity is five: f(x)x→∞​=5, and if f(x) has a vertical asymptote at 17, we are taught to say that f(x)x→17​=∞. This is many students' first exposure to ∞, and it's a very misleading introduction since it implies that ∞ can be treated as a number which is simply "larger than all other numbers."

However, in this context, infinity is just a shorthand for a well-defined notion of a function not having a limit of any real value, but instead, increasing forever without bound. See the wiki on limits of functions for more details!

Rebuttal: I've definitely seen infinity in math textbooks, and sometimes it's defined as a number bigger than all non-infinite numbers. Why is it there if it's not a real math concept?

Additionally, when considering the cardinal numbers, we must change our intuition about infinity: it is not a number in the "number line" sense, as the reals are applied. Instead, it is a concept for measuring and comparing the sizes of sets.

∞ is the number at the end of the real number line.

Cite as: Is infinity at the end of the real number line?. Brilliant.org. Retrieved from https://brilliant.org/wiki/infinity-is-the-number-at-the-end-of-the-real/
Join Brilliant Excel in math and science. Sign up
Sign up to read all wikis and quizzes in math, science, and engineering topics.
Log in with Facebook Log in with Google Log in with email
Join using Facebook Join using Google Join using email