We ask: is there gravity inside the International Space Station?

In fact, the force of gravity does act on objects in the ISS although they appear to float freely, as they would in deep space in the complete absence of gravity. To see how both things can be true, let's bring the question back down to Earth. If we sit in a car on Earth's surface, it is clear that gravity is acting.

Despite this, we know the familiar feeling of weightlessness when sitting in a car or a roller coaster that goes quickly over the crest of a hill. The reason this happens is that when the track curves around (from uphill to downhill), the coaster cart (and everything in it) still has its original upward velocity. The shape of the track imposes a trajectory on the cart, and accelerates it downward.

Objects in the cart do not experience this force, and thus are left in free-fall until they collide with the safety belt/harness. In fact, we could release something from our hands and it would appear to float in midair, neither moving upward or downward from our perspective.

It is clear that although gravity continues to act, objects in the cart experience a state of weightlessness due to their trajectory.

This is analogous to the circumstance we find in the space station. The ISS isn't simply floating in space, at rest with respect to Earth—it is orbiting the planet at more than 17,500 mph, or 4.5 miles per second.

Traveling in such a circular orbit requires a force toward the center. For a simple analogy, think of the force you feel from a car door when rounding a curve. Here we have the same need but the walls of the ISS can't provide such a force, after all the ISS is hurtling through space and can't push off something rigid like the road.

So where does the force come from? It comes from the gravitational pull of the Earth. In fact, when orbiting the Earth, the ISS (or any other satellite) experiences a perfect balance between the inward pull of gravity, and the centripetal acceleration it requires to keep moving in a circle.

As such, objects inside in ISS experience a constant free fall toward Earth, giving the sensation and appearance of weightlessness. But counter to what we might expect, this is due precisely to the pull of gravity, not its absence!

The same phenomenon is seen in a freely falling elevator. Suppose a person is standing in an elevator in freefall, when they hold out their phone and release it. In the frame of the Earth, the person and the phone fall freely under gravity. However, from the perspective of the person in the elevator, the phone stays at the same height, appearing to float.

The ISS is in the gravitational field of the Earth which has the strength agravity​=r2GMEarth​​ at a height r above the center of Earth. On the other hand, to remain in a circular orbit at speed v and radius r, the ISS requires an acceleration toward the center of Earth given by acentripetal​=rv2​. The only source of inward acceleration for the ISS is the gravity of Earth, so we have agravity​r2GMEarth​​​=acentripetal​=rv2​​ and the orbital velocity is v=GMEarth​/r​.

Therefore, in the frame of the ISS, objects experience an acceleration a=agravity​−acentripetal​=0, so that astronauts experience a state of weightlessness.


Query: If a person stands on a scale inside the ISS, it will give a reading of zero. Does that imply that there is no gravity inside the ISS?

Reply: It is true that the reading of the scale is zero, but that does not imply that gravity is absent. The person scale is accelerated toward Earth. The scale does not oppose him, as it is falling along with him. As there is no normal reaction applied by the scale, its reading is zero.

Query: In the frame of the ISS, the acceleration of any object is zero. Does that not imply that there is no gravity inside the ISS? 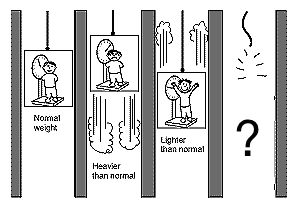 Take the acceleration due to gravity to be g=10 ms−2.