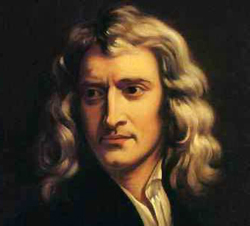 Sir Isaac Newton (1642-1727) was one of the world's most famous and influential thinkers. He founded the fields of classical mechanics, optics and calculus, among other contributions to algebra and thermodynamics. His concept of a universal law--one that applies everywhere and to all things--set the bar of ambition for physicists since.

Newton held the position of Lucasian Professor of Mathematics at Cambridge University in England, a prestigious professorship later shared by Charles Babbage, George Gabriel Stokes, and Stephen Hawking, among others.

The binomial theorem is a formula used to expand out expressions of the form (x+y)r.

While Blaise Pascal had already developed the binomial theorem for the case where r is a nonnegative integer, Newton derived the general case for which r could be any rational number in 1655, while spending time away from Cambridge avoiding an outbreak of the plague [1]:

The expressions generated by these expansions were especially useful for calculating approximations of functions. Newton used the formula to calculate the value of π out to 16 decimal places [2].

Express your answer as an exact decimal.

Newton discovered three laws that combined would in principle determine the motion of any object. He published his laws in 1687 in the first volume of the Principia Mathematica (Latin for "Mathematical Principles"). These laws explain how any objects will move given the forces acting between them, and the initial position and velocity of the objects. 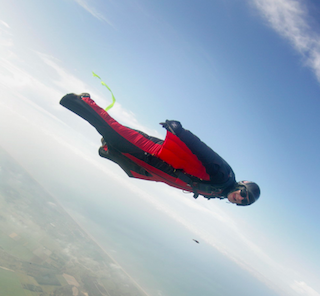 Wingsuits allow humans to control fall and generate lift. The wingsuit flyer above controls his direction of flight by a direct application of which of Newton's laws?

The first law was in contrast to Aristotelian mechanics, which held that every object had a natural place, and that all objects would tend to go towards their natural place. Newton replaced this goal-centered view of the world with a mechanical, local one. The laws describe a perfectly deterministic universe, one in which the motion and behavior of all objects are theoretically exactly specified given a set of initial conditions and rules for determining the force between objects.

Because of Newton's contribution to the idea of force, the metric unit for force N≡(kg×m)/s2 is called the Newton.

Newton's laws of motion describe how objects accelerate given specific forces. In order to determine how the position of an object changes from a description of its acceleration, Newton needed to develop a new field of mathematics known as calculus.

Solving for the position, velocity, and acceleration of a moving particle

If a particle has a constant velocity v at time t, its position at a slightly later time t+Δt is x(t)+vΔt. But if the particle is accelerating, this is not quite true. The velocity changes during the period Δt. In order to account for this, the time Δt could be split into two intervals, and the velocity at each of those points is used to calculate the position. But this doesn't help, as again the velocity changes between t and t+21​Δt. Thinking in this way leads to an infinite regress.

Newton introduced calculus as a way of formalizing this reasoning and allowing calculations of position and velocity by considering how these functions behaved as Δt became very small, otherwise known as taking the limit of the function. The process of finding velocity from acceleration or position from velocity is called integration. The process of finding velocity from position or acceleration from velocity is called differentiation.

The mathematician and philosopher Gottfried Leibniz also invented calculus around the same time. There was a large fight in the scientific community over whether Leibniz or Newton had invented it first, or indeed whether one had stolen the ideas from the other. However, the consensus now is that they genuinely did develop the idea independently. Because of this, they used different notation styles for expressing calculus, both of which are in use today. In Newton's notation, the derivative of x with respect to time is given by x˙, whereas in Leibniz notation, the derivative is dtdx​.

In the third volume of the Principia, Newton described his theory of universal gravitation. His two main insights were that masses attract each other along the line between them, and that every mass attracts every other mass, no matter how large or small. For instance, the force that you exert on the Earth is the same magnitude as the force the Earth exerts on you, just in the opposite direction. Mathematically, this is expressed as

where Fg​ is the force of gravity, G is the gravitational constant, m1​ and m2​ are the masses of the two objects, and r^ is the direction of the line between them. The net gravitational force on an object is the vector sum of the forces exerted on it by all other objects in the universe.

One popular story holds that Newton came up with the idea for gravitation when he was sitting under a tree and got hit on the head by an apple. This is not well supported by historical documents, but Newton did at least use falling apples as an analogy for explaining radial forces: "Therefore does this apple fall perpendicularly or towards the centre? If matter thus draws matter, it must be proportion of its quantity. Therefore the apple draws the Earth, as well as the Earth draws the apple." [3]. 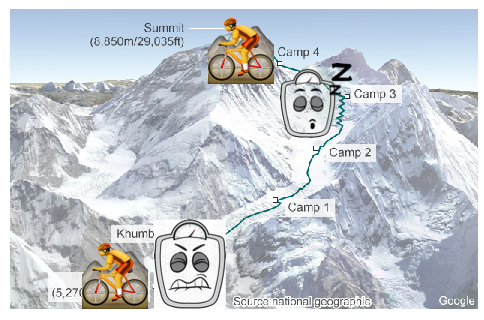 While your mass is the same everywhere, your weight, which is the gravitational force you feel as a result of your mass, depends on where you are.

Newton showed that his law could reproduce Kepler's laws of planetary motion, which described how planets move in fixed ellipses around the sun. He then generalized these laws by showing that the paths of objects acting under the gravity of the sun could be any conic sections, including ellipses, but also parabolas, hyperbolas, and lines.

Because the law of gravitation describes a force between two objects no matter how far away they are, Leibniz accused Newton of invoking "spooky action at a distance." [4] This was against a popular philosophy of science at the time, which held that all effects needed to result from local interactions. Today, Einstein's theory of general relativity has replaced Newton's theory, in some sense proving Leibniz right. General relativity agrees with many of the predictions of Newton's theory, but doesn't have action at a distance. Gravitational effects (in the form of warped spacetime) propagate at the speed of light.

Light refracting in a prism: not just an album cover

As with his laws of motion, Newton also overturned Aristotelian beliefs about light. It was thought that white light was completely pure, but Newton showed that it was composed of every other wavelength of light by refracting white light through a prism. The white light splits into distinct beams of light corresponding to all the colors of the rainbow. Newton also invented the color wheel, which arranged all those colors in order, but with violet next to red to show the way humans perceive color: 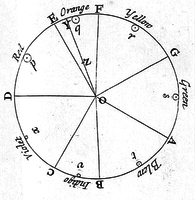 Newton's depiction of the color wheel in Opticks

Newton's law of cooling holds that the rate at which an object will change temperature is directly proportional to the temperature difference between it (Tobj​) and its environment (Tenv​):

If the environment remains at constant temperature, this implies that Tobj​ will asymptotically approach Tenv​:

which can be shown using differential equations. 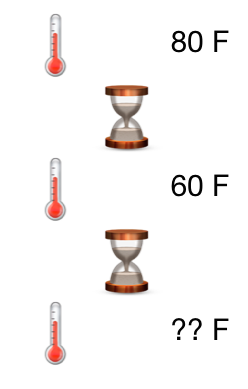 In addition to his lasting scientific discoveries, Newton also investigated alchemy, the study of turning one element into another. While the techniques that Newton investigated led nowhere, alchemy was in a sense rediscovered in the form of nuclear physics. It is now strictly possible to turn lead into gold using a particle accelerator. However, at an estimated quadrillion dollars per ounce, it would be a poor financial choice [5].

Newton was devoutly religious and would frequently study the Bible, attempting to make predictions based on its contents. He once wrote that the world would end no sooner than the year 2060 based on the Book of John [6].

[2] Newton's Generalization of the Binomial Theorem. Retrieved from http://www.wwu.edu/teachingmathhistory/docs/psfile/newton1-student.pdf on February 22, 2016.

[5] Matson, John. Fact Or Fiction?: Lead Can Be Turned Into Gold. Scientific American. January 31, 2014. Retrieved from http://www.scientificamerican.com/article/fact-or-fiction-lead-can-be-turned-into-gold/ on February 22, 2016.