In our exploration, we have seen how cylindrical shells and Möbius strips can be constructed from edge identification diagrams.

Continuing this idea, what happens if we identify all four edges in the rectangle? A torus is obtained by identifying the two parallel sides of a rectangle in the same direction. One example demonstrating this identification is the game of Pac-Man: if Pac-Man exits to the right (or bottom) of the screen, then he will enter on the left (or top) of the screen from the same position where he exited. So the game of Pac-Mac is actually played on the topology of a torus!

It is also possible to extend other games that are typically played on a square or rectangular board to a torus. How would your strategies change for tic-tac-toe or checkers on a torus?

A Klein bottle is obtained by identifying the two parallel sides of a rectangle, one pair in the same direction and the other sides in the opposite direction. Klein bottles also have many surprising and wonderful properties. 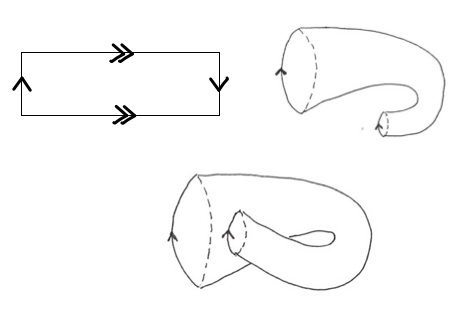 As an exercise, imagine playing Pac-Man on a Klein bottle instead of a torus!

A d-manifold is a topological space such that the neighborhood of each point looks locally like Rd. All of the objects we have considered through edge identification diagrams are 2-manifolds. Note that manifolds may be bounded or unbounded, and may be orientable or non-orientable.

The topology of a manifold is the set of properties of it which are unchanged by stretching.

We conclude with a well-known Klein bottle limerick:

Thought the Möbius loop was divine

Said he, "If you glue

The edges of two

For more on topology, see Möbius Strips and Knots.