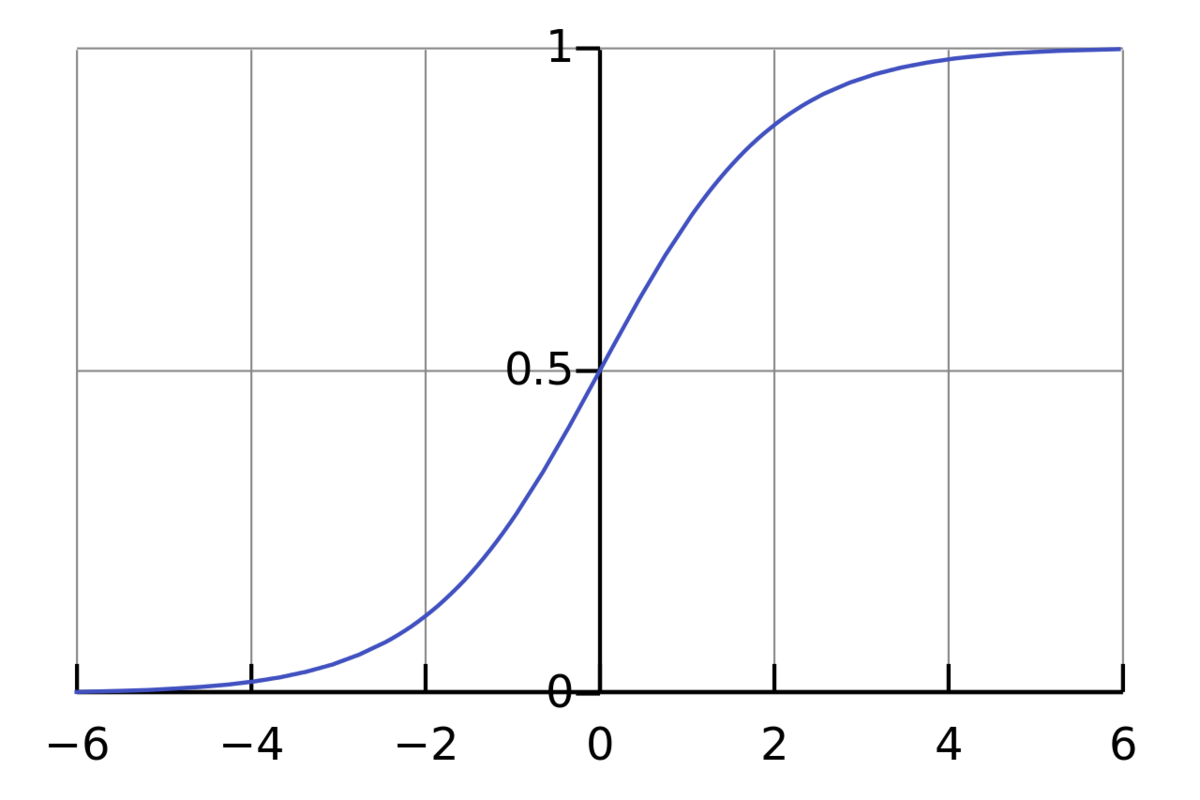 The standard logistic function, described in the next section.

A logistic differential equation is an ODE of the form f′(x)=r(1−Kf(x)​)f(x) where r,K are constants. The standard logistic equation sets r=K=1, giving dxdf​=f(1−f)⟹dxdf​−f=−f2.

Logistic functions were first studied in the context of population growth, as early exponential models failed after a significant amount of time had passed. The resulting differential equation f′(x)=r(1−Kf(x)​)f(x) can be viewed as the result of adding a correcting factor −Krf(x)2​ to the model; without this factor, the differential equation would be f′(x)=rf(x), which has an exponential solution.

When little time has passed, and f is small, this correcting term is effectively null and the population rises nearly exponentially, which is roughly consistent with empirical evidence. As time goes on, however, the correcting term becomes more and more significant. This makes sense from a practical perspective: large populations will necessarily compete for resources (e.g. food, living space, etc.), while small populations are not generally constrained by these factors and can grow exponentially as usual.

In this context, the two parameters have physical interpretations:

Both of these values should be predetermined in order to approximate the curve, but they are not necessarily easy to calculate; for example, the carrying capacity for humans is unknown (but suspected to be slightly less than 10 billion). These are important to know a priori, as attempting to fit to known data can result in catastrophic results: 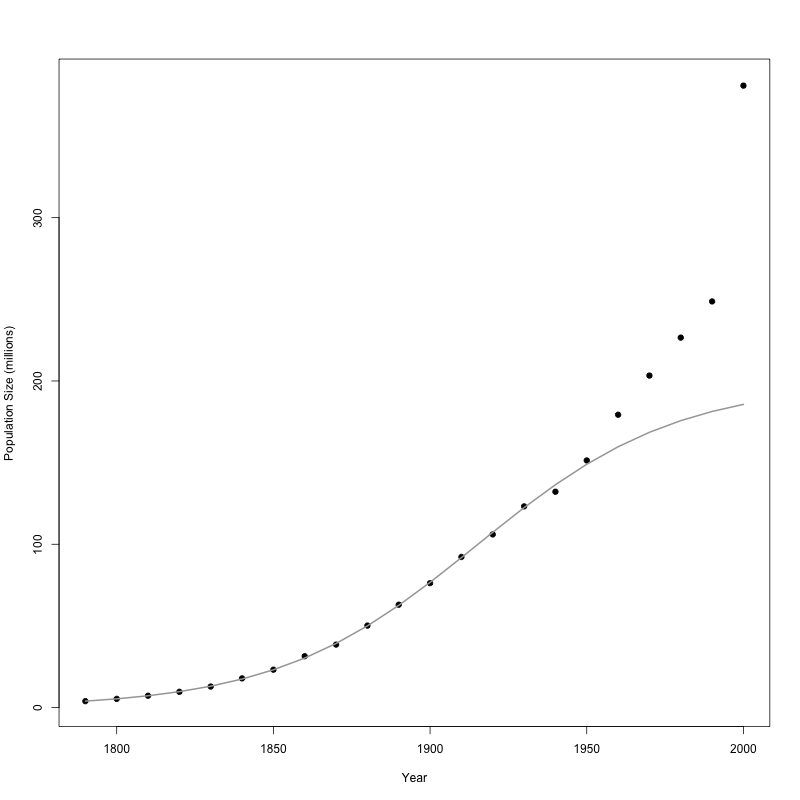 The above shows the results of fitting the U.S. population from 1790-1930 to a logistic function. For those years the model works excellently, but afterwards the logistic function drastically underestimates the actual population. This is because the assumed model uses K≈225 (million) and will thus approach this value as time approaches infinity, but as we know today, the population is perfectly capable of exceeding this value.

It is also possible for the carrying capacity to itself depend on time, in which case the differential equation becomes f′(x)=r(1−K(t)f(x)​)f(x). Most often, this case is considered when K is periodic, especially in the context of seasons: for example, the carrying capacity may be significantly lower in winter, when fewer resources are available. It can be shown that in such a case, f is periodic as well, with the same period as K.

Logistic differential equations are useful in various other fields as well, as they often provide significantly more practical models than exponential ones. For instance, they can be used to model innovation: during the early stages of an innovation, little growth is observed as the innovation struggles to gain acceptance. Later on, much research and development is done, and the industry grows roughly exponentially. Finally, in the late stages when there are multiple competitors in the market and the "easiest" improvements have been performed, the innovation slows down significantly and approaches some limiting value.

A similar analysis can be applied to language change: for instance, a new word will see little growth at the beginning of its life cycle as it begins to gain adoption, then its use begins to grow exponentially as it gains exposure, and finally slows down as it becomes universally adopted.

Such a phenomenon of starting with slow growth, expanding into exponential growth, and slowing down into logarithmic growth, is modeled by the logistic distribution. Therefore, any quantity experiencing this kind of growth can be modeled logistically; these fields range from medicine to machine learning to chemistry to linguistics.